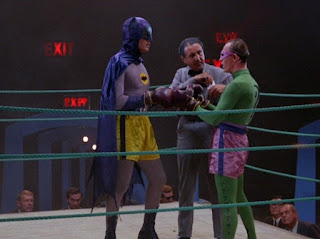 Charles Hoffman has the honor of scripting the first of the “clever-zany” episodes, in which the story is fundamentally ridiculous (even for the genre) but enough clever stuff happens to make the experience bearable.

One online source makes the claim that Frank Gorshin returned to the role of the Riddler because the show was finally able to meet his salary demands. Given the cuts in the budget this season, this would only be possible if the producers thought that getting Gorshin back for just one episode—which was his only contribution to Season Three—might give the program a boost in publicity, On the other hand, such publicity might’ve given other actors similar ideas. Whatever the reason, “Ring’ became Gorshin’s last bow as the Prince of Puzzlers, and the actor plays it to the hilt, possibly with the knowledge that this would be his last chance with the role that made him famous.

For unknown reasons the Riddler decides to gain control of the “fight-game” in Gotham City. Nothing is said about making money by betting on fixed fights, but Riddler’s mode of operation consists of fixing fights anyway, by taking prominent boxers and subjecting them to debilitating treatments so that they lose their matches. In addition, Riddler himself masquerades as a Middle Eastern pugilist with the amusing cognomen of “Mushy Nebuchadnezzar,” though this seems to be nothing but a scheme to trap Batman. But this scheme is no better than the first, since it doesn’t do anything to take Robin out of the picture, much less coping with the advent of Batgirl.

Gorshin seems to be having fun with his readings of the riddles—certainly a decided improvement over John Astin’s delivery of same—but the highlight of the episode is when Riddler introduces a villainous ally, the Siren (Joan Collins). Siren, who can mesmerize men with her high-pitched singing, helps Riddler destabilize some of the boxers, but she doesn’t seem to be either his henchwoman or his partner in crime. Further, she departs the episode in the middle, setting up her solo venture in the next story. An amusing goof is that Siren first appears when Batgirl invades Riddler’s gymnasium-hideout, and Riddler orders Siren to paralyze her, just before he and his goons all put on earmuffs to block out the sound. For the first time, everyone there apparently learns that Siren’s song does not affect women—although for some strange reason Riddler’s henchwoman Betsy seems to know this in advance, since she alone does not don earmuffs.

As usual Adam West and Frank Gorshin play off one another’s characters quite well, and the scene between them in a boxing ring is amusing.Following the concluding punch-up, Riddler delivers a riddle that promises his eventual return. Instead this was the villain's final round.

Posted by Gene Phillips at 3:34 PM
Email ThisBlogThis!Share to TwitterShare to FacebookShare to Pinterest
Labels: combative adventures, the marvelous