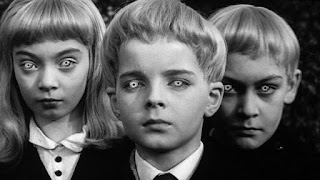 I have not read John Wyndham’s 1957 THE MIDWICH CUCKOOS, the source novel for VILLAGE OF THE DAMNED. I’m familiar enough with other Wyndham works to know that he frequently utilized the trope of having the mundane world invaded by entities either from beyond Earth (DAY OF THE TRIFFIDS) or from beneath it (THE SECRET PEOPLE). The CUCKOOS novel aligns with the former trope, since the thing that menaces the small English village of Midwich is extraterrestrial in nature.

In both book and film, no aliens as such are seen, though the E.T.s are implicitly the “cuckoos” of Wyndham’s title. The real birds reportedly lay their eggs in the nests of other birds, so that the fledgling cuckoos will dispose of the actual offspring of the nest-making mother, and thus the cuckoo-mother doesn’t have to do the work of feeding and raising her own brood. In both novel and movie, the unseen aliens zap everyone in Midwich into unconsciousness, and through some astral force manage to impregnate every woman capable of giving birth. Naturally, this proves upsetting both to married couples and to women who find themselves about to give virgin birth. Nevertheless, the Midwich children are permitted to be born, though the British government, having witnessed this unique transgression, keeps watch on things. A scientist named Zellaby (George Sanders), also both a resident of Midwich and a victim of this cosmic cuckoldry, serves as the story’s viewpoint character, studying the infants as they rapidly grow into young children, all possessed of blonde hair regardless of their parents’ physical proclivities. In the novel the alien kids also have silver skin and golden eyes, and they attain the bodies of teenagers in their childhood years. The film opts to make the kids look ordinary except for their hair—thus making it creepier when they display formidable psychic powers, and when they show evidence that they belong to a hive-mind.

Zenabel learns from his government contacts that Midwich was not the only Earth-community to suffer from “astral insemination.” In an Eskimo village, the resultant blonde-haired offspring were immediately wiped out by the villagers, and while the Russian government allows a contingent of children to grow in order to study them as the Brits do, this experiment ends in catastrophe. Zellaby counsels patience from his fellows, but as he surveys the children—even the one to whom he’s an “accidental father”—the scientist observes that they lack all human emotion and are given to using their psychic powers against anyone who challenges them. The Midwich Children are aware that others of their kind have been exterminated, and everything they do is aimed at survival—and eventually even the sympathetic Zellaby realizes that he must work to make sure his species survives this ethereal invasion.

In addition to the Children incarnating the Darwinian drive to continue their species, their uniform blondeness may, however unintentionally, evoke for moderns the specter of “the blonde Aryan” who, according to Fascist ideology, sought to overthrow all lesser breeds. The title-change was almost certainly made for the sake of luring in filmgoers with a more melodramatic phrase. But who are “the Damned” of the title? The put-upon husbands, wives and unmarried mothers may feel as if they’ve been put through hell, but the reference would seem to be to the Children themselves, since their unnatural powers give them control of the village. Since the Children bear no resemblance to devils, and if anything come closer to the image of godlike cherubs, one may rationalize that they’re “damned” in the sense that their unique species is ultimately destroyed. 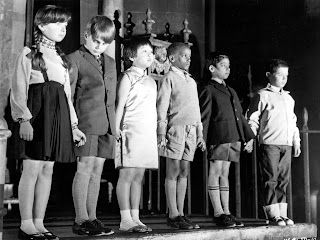 Nevertheless, because VILLAGE made money for producing studio MGM, “the Damned” appeared three years later in a different form, not directly related to the first group (presumably so that the filmmakers could create a sequel without being forced to pay author Wyndham for any input). Interestingly, where VILLAGE suggests the possibility that the Midwich Cuckoos may have arisen as a spontaneous mutation, only to drop that idea in favor of alien infiltration, CHILDREN OF THE DAMNED advocates that very notion as the explanation for a sudden explosion of psychic children around the world, all apparently arising from their mothers sans intercourse, in a process compared to parthenogenesis. (This scenario raises the question as to what “the damned” in the title refers to this time. Possibly the whole “damned” course of evolution?)

Possibly the filmmakers also wished to distance this quasi-sequel from the earlier film in terms of that film’s most memorable image, for this time the wonder-kids are not all blonde, nor are they all Caucasian. Indeed, the sextet of virgin-born kids includes grade-schoolers whose mothers were Indian, African, and Chinese respectively. Said mothers just happened to be born in different parts of the world, rather than being part of an alien experiment, though the Indian child’s mother happens to live in Great Britain. The governments of those countries with miracle-children bring them to London for a mass study project, overseen principally by psychologist Lewelin and government agent Burke. The two may be seen as embodying the two aspects of the Zellaby character from the first film, since Lewelin wants to study the children and Burke wants to destroy them.

Like the alien kids from the earlier film, these multi-racial children have psychic powers and share a hive-mind that apparently causes them to be largely unemotional. Nevertheless, since they are human beings and not aliens, the children sometimes register very adumbrated reactions to the fear and hostility of ordinary people. When the representatives of the various nations attempt to use the kids as pawns, they join together and flee the government’s surveillance, seeking a purely symbolic sanctuary in an abandoned church, and obliging one ordinary woman, the aunt of a super-boy named Paul, to serve as their figurative “mother.” However, though the kids defend themselves when government agents attempt to imprison them, they have no intention of displacing humanity, and end up sacrificing themselves for the greater good.

CHILDREN, which is more critical of the foibles of ordinary humans, is in some ways philosophically preferable to the xenophobia of VILLAGE. Nevertheless, the characters and situations of CHILDREN have a sketchier quality, and for that reason the later film does not attain the intense mythicity of the 1960 original.

Posted by Gene Phillips at 3:10 PM
Email ThisBlogThis!Share to TwitterShare to FacebookShare to Pinterest
Labels: the marvelous