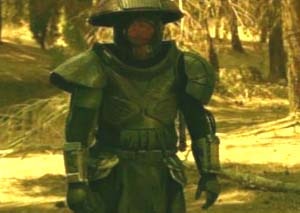 AVH is yet another crappy mockbuster from The Asylum, this time imitating the two ALIEN VS. PREDATOR films, the latter of which appeared the same year as this direct-to-video cheeseball. To be sure, neither of the AVP films were all that distinguished, either. But at least there was some basic appeal of crossing over two aliens, each of whom had starred in their own individual franchise-serials. Here, the Asylum satisfies the title by offering two aliens who descend to Earth to fight one another, while catching innocent humans in the middle. One E.T. is "the Alien" of the title, who's nothing but a big spider, while "the Hunter" is just a clone of the original Predator-- different armor of course, but a strong physical resemblance to the what the Predators look like beneath their armor, as well as having the same camouflage power.

Like many Asylum offerings, this one takes place in an unremarkable section of Californian forest, and the victimized humans occupy an out-of-the-way town. The viewpoint character is reporter Lee (William Katt, looking a long way from THE GREATEST AMERICAN HERO), and while a lot of junk-films could at least put across some basic conflict for his character, we only know that he's retreated to the small town because he's burned out on writing for some reason. He and a young woman witness a UFO crash to Earth and wreck a farmhouse, and they gather other locals to warn them of the danger-- at least once the others are convinced of the aliens' reality. Lee advocates the group's seeking out a local survivalist, Valentine, because he has a stock of weapons, and Lee and Valentine have bad blood, yada yada yada. Amid all the usual dithering the humans eventually figure out that one E.T. is hunting the other for sport, but even the heavy artillery of Valentine and his friends can't overcome alien powers and tech, so the film can't even handle the "men's adventure magazine" vibe put across by the original PREDATOR. From start to finish, it's a dull "humans-run-from-monsters" tale, and the only actor who comes off a little better than average is lead actress Deedee Pfeiffer, playing a woman who's apparently been lusting after Lee for ten years but only makes her move on him when the two of them are in deadly danger.

In the ALIEN/PREDATOR films, both E.T.s are the stars of the show, despite being opposed to one another. But the spider is not a co-equal member of the story, which devotes most of its narrative to the Predator rip-off, thus making "the Hunter" the star of this dismal show.

Posted by Gene Phillips at 11:12 AM
Email ThisBlogThis!Share to TwitterShare to FacebookShare to Pinterest
Labels: combative dramas, the marvelous