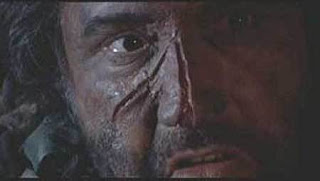 Wes Craven's second directorial effort shows him recycling much the same "savage nature vs. refined culture" opposition seen in LAST HOUSE ON THE LEFT, though to less mythic effect.

The first HILLS HAVE EYES is loosely based on both the historical legend of the cannibalistic Sawney Beane family and the fictional psycho-killers of Tobe Hooper's TEXAS CHAINSAW MASSACRE.  A family of middle-class tourists, driving to California through the Nevada desert, fails to stay on the main highway as instructed by an old desert-rat running a last-chance gas station. When the family gets stranded in the wilderness, they learn that the old man has fathered a soulless reprobate, possessed of the high-flown name "Papa Jupiter." Jupiter in his term has spawned a small brood of freakish scavengers who prey on desert-travelers and who dress like the the denizens of the slightly-later "Mad Max" universe. In keeping with the mythological motif, Jupiter's three sons are named Mars, Pluto, and Mercury, though the one daughter is given the non-archaic name of Ruby. Except for Ruby, who eventually becomes an ally to the beleaguered innocents, the savages continually attack and massacre their victims, until some of the family-members meet the challenge with an equal level of savagery.

This trope of the interchangeability of the savage and the civilized man is not presented in as schematic a manner as it was in LAST HOUSE, and Craven's alleged critique of "bourgeoise society," such as it was, became diffused because the script includes too many characters, most of whom tend to blend together. Jupiter is the most impressive character. His father, becoming aware of his ruthless nature, tried to kill Jupiter by smashing the youth in the face with a tire-iron, but the predatory paterfamilias survives with an impressive scar. That said, the character of Pluto has an advantage of sorts in that actor Michael Berryman was born with a formative malady, making him look far more "freakish" than the rest of the family, and HILLS HAVE EYES led to a long career for Berryman in assorted horror and fantasy films. Craven's talent for violence pervades HILLS, but the various assaults never become more than the sum of their parts. 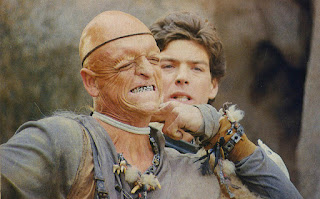 Eight years later, Craven made an attempt to promote HILLS HAVE EYES as a series, but though he both directed and wrote the sequel, the results were underwhelming. Though most of the cannibals who died in the first film stay dead, Pluto gets resurrected, evidently because of fan-response to his impressive ugliness. Pluto is joined in his desert depredations by "the Reaper," the hitherto-unmentioned brother of Papa Jupiter, and though he's physically impressive, his character lacks any context.

Craven does try to ring a new setup, for this time the victims are a club of motorcycle-enthusiasts who choose to ride through the same area of Nevada desert where Jupiter's brood once reigned. Two characters are carried over from the first film: Bobby, one of the surviving tourists, and Ruby, now called Rachel. Bobby, though vaguely associated with the bike-club, chooses not to go along because he's been so badly traumatized by his experiences. Yet though Rachel ought to have an equal reason not to go, she joins the others in trekking into the badlands. Presumably the script needed her to go along so that she could explain the situation to the newbies.

Despite the reduced number of savage predators, they still manage to wreak carnage on the bikers, though on average the motorcyclists prove tougher than the first film's victims. This time the savages make greater use of crafty murder-methods like deadfalls to decimate the bikers, though once again the representatives of civilization end up winning the day.

Though the violent set-pieces are competent, the characters are again less than impressive and their deaths don't add up to much. Craven also throws in various flashbacks to the first film, which gives HILLS PART II an aura of chintziness. The "series" came to an end but both films were later remade in the 2000s.

Posted by Gene Phillips at 2:16 PM
Email ThisBlogThis!Share to TwitterShare to FacebookShare to Pinterest
Labels: diabolical devices (u), freakish flesh (u), perilous psychos (u), the uncanny, weird families and societies (u)