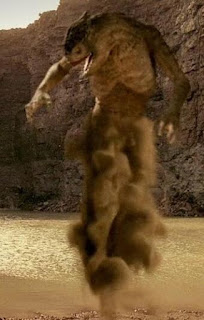 Of the combative movies I've started to review for the Supercombative Blog, ALMIGHTY THOR currently holds pride of place as the worst so far. However, ALADDIN AND THE DEATH LAMP is a good contender for second place.

As one might expect from the title, this is a reworking of the simple but evocative Arabian folktale, with a lot of banal SF-tropes grafted on to the story. Here the genies are other-dimensional demons who are constantly seeking to seduce mortals into letting them invade the human world. Years ago, one of the jinn's invasion was foiled by four adults, three of whom were killed. The one who survived, name of Khalil, raised the children of the other three adults, but the kids-- who are now adults by the time of the main story-- have only been told that they are all orphans. But a greedy merchant, more or less serving in the role of "the magician" in the original tale, knows that there are special devices, lamps and/or rings, through which one can control the jinn. The merchant talks the three orphans-- Aladdin, his "sister" Shifa and his "brother" Luca-- into ferreting out the jinn-devices. In the course of things, Aladdin and his quasi-siblings find out their heritage, but where Aladdin is Gallant, seeking to do the right thing, Luca is Goofus, the screwup. (I'm not sure why the bad guy has an Italian name when everyone else sounds vaguely Arabic, but since Luca like the merchant is greedy, maybe the former was named for "filthy lucre.")

The settings don't look even remotely like the Middle East and the CGI is minimal and banal. The three main actors do their best, but the dialogue gives them nothing to work with.

Posted by Gene Phillips at 6:36 PM
Email ThisBlogThis!Share to TwitterShare to FacebookShare to Pinterest
Labels: combative adventures, the marvelous