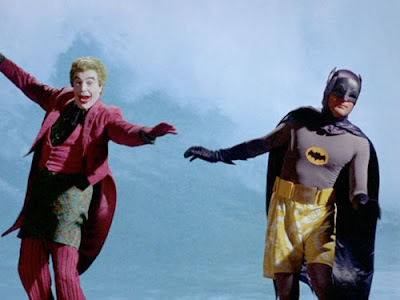 In realistic terms the premise of Charles Hoffman's "Surf's Up" is as stupid as that of Dwight Taylor's "Louie the Lilac," in that both villains seek as their big scores the adoration of Gotham's young people, as if said adoration can vault the evildoers into temporal power somehow. Also, in both cases the writers sought to contrive situations that might appeal to adolescent viewers. But whereas "Lilac" proves labored and tedious, making it one of the worst "dumb-zanies," the images of Hoffman's episode are just wild enough to elevate it to the ranks of the "clever-zanies."

Once Joker (Cesar Romero) has conceived the notion of becoming the King of Gotham's Surfing Crowd, he conjures up a "transferometer" which downloads a surf-champion's knowledge and experience into Joker's brain. Of course Joker's presence on the beach draws the attention of "the Terrific Trio," as well as that of both Commissioner Gordon and Chief O'Hara. (Making one of their few joint ventures into "the field," the two old fogeys go undercover as a couple of grey-haired hodads who say "Cowabunga" a lot.) For some reason Joker allows the surf-champion to wander around the beach, free to tell everyone what the villain did to him. Yet Batman somehow decides that the only way to defeat the Clown Prince of Crime is to out-surf the fiend-- with the hero naturally drawing on his own insuperable talent for very nearly everything.

The dialogue isn't that clever and the final fight-scene is only average. Still, the episode is saved somewhat by the frequent citations of surfing-terminology and the sight of Joker and Batman competing in a surfing-contest-- complete with wearing swim-trunks over their respective outfits.