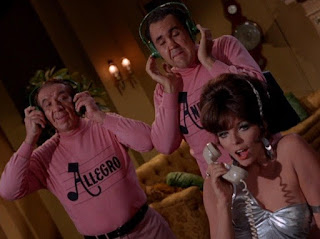 “Wail of the Siren” is far from a great episode, but it’s one of the few third-season outings that doesn’t fall into the trap of over-zaniness.

For one thing, the Siren (Joan Collins) doesn’t make use of the usual villain-gimmicks. She has the closest thing one can find to a “super-power” in the series, in that she can mesmerize men with her voice when she sings a “high C” note (though implicitly this is the result of some arcane training). For another thing, Siren’s big score is simple and logical. Her main plan is to enthrall Bruce Wayne and force him to yield his wealth to her. But to nullify any interferene by Batman and Robin, she seeks out Commissioner Gordon and hypnotizes him. Under Siren’s control, Gordon stows away in the trunk of the Batmobile, undermining the claim in “The Zodiac Crimes” that the car has devices to prevent such infiltratiuon. Once he’s been taken to the fabled Batcave, Gordon is supposed to learn the identities of the Duo and expose them. (Siren seems to have no plans for Batgirl, despite having met her in the previous episode.) Gordon succeeds in his mission, and even meets Alftred, whose voice the top cop recognizes from their many encounters on the Batphone. Alfred saves the day by dosing Gordon with Bat-gas and keeping him out of trouble until he recovers from the Siren-spell.

The other part of Siren’s plan goes swimmingly. Wayne falls victim to her spell, making this episode one of the few times Batman can’t escape a trap. Robin (his ears protected by Bat-earplugs) and Batgirl (naturally immune to the femae of the species) are obliged to rescue Wayne. The episode concludes with a very dull rooftop-fight between the heroes and Siren’s goons, though the advantage of the rooftop locale is that in the melee Siren gets knocked off the side and has to hang on for dear life. Robin—who’s just been forced to kayo the robotized Wayne—proves uncharacteristically hardcore, threatening to let Siren fsll to her death if she doesn’t reverse her spell on Wayne. She does so, ruining her voice and eliminating herself as a future threat. There aren’t that many strong lines, although Siren does disparage both Catwoman and Black Widow as “amateurs” in comparison to her. Certainly. she’s one of the better female villains of the third season, though characters like Nora Clavicle and Doctor Cassandra set that particular bar pretty low. Not surprisingly for the actress who later made it big on DYNASTY, Collins is quite good in the role of a venal villainess.

Posted by Gene Phillips at 1:24 PM
Email ThisBlogThis!Share to TwitterShare to FacebookShare to Pinterest
Labels: combative adventures, the marvelous