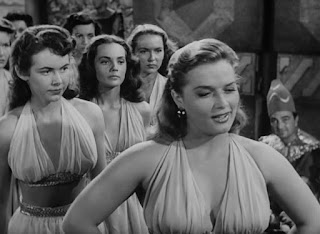 SLAVE GIRL was the second Tarzan film to star Lex Barker, and the second-and-last to be directed by Lee (“Roll ‘Em”) Sholem. The director’s sobriquet arose from his penchant for cranking out dozens of television episodes, most notably on “The Adventures of Superman.” That said, this 1950 entry in the RKO series of ape-man films is as well-directed as the best in the series. Possibly Sholem benefitted from the lively script, co-authored by Hans Jacoby, who had written the superior TARZAN ANDTHE AMAZONS and would later pen the enjoyable TARZAN’S SAVAGE FURY.

This entry eschews the trope of the ape-man being forced to repulse greedy white invaders from Tarzan’s version of Africa. This fantasy-jungle include no Black Africans, but two ostensibly “native” tribes: the Nagase, who look like Polynesians crossed with American Indians, and the Lionians, a city full of white people who apparently colonized Africa during some pre-Christian era. Tarzan (Barker) and his wife Jane (Vanessa Brown) learn that the Lionians have started raiding the Nagase and stealing women. Tarzan fights with some of the raiders, but despite putting his mark on one interloper—using a knife to give the man a nasty face-scar—most of the raiders escape with their bounty. The ape man takes a prisoner back to the Nagase, but when the Nagase attempt to question the invader, he drops dead from a mysterious disease, one that almost immediately claims the life of a nearby tribesman.

Tarzan now has a double mission: his quest to liberate the stolen women must take a back seat to finding a white doctor who can quell the disease. The ape-man seeks out a colonized city, eliciting one Doctor Campbell to come and treat the Nagase. The doctor brings along his sultry native nurse Lola (Denise Darcel, playing the role as a sort of blonde Polynesian), and Lola lets everyone know that she has a thing for Tarzan. In a matter of days Campbell cures the Nagase with a serum, at which point the doctor volunteers to accompany Tarzan on his rescue mission, with some idea of curing the Lionians of their highly communicable disease. However, the men don’t allow either Jane or Lola to go along, and Tarzan somehow talks his wife into providing Lola with guest quarters. This results in an above-average catfight between the jungle babes, but neither has time to lick any wounds, for another Lionian raiding-party shows up and abducts both women. (Technically, the movie’s title should reference “slave girls,” since the Lionians already have a harem full of pulchritude when Jane and Lola are added to the group.)

By some cinematic legerdemain, the Lionians and their cargo arrive at the city before Tarzan and Campbell make the scene. While Jane and Lola are awaiting rescue, they learn that the Lionians are so called because they worship lions, perhaps making them kissing cousins to a lion-worshipping tribe in Burroughs’ TARZAN AND THE CITY OF GOLD. The disease has taken most of the city’s women, thus motivating the raids, and though the young prince has recently inherited the throne thanks to his father’s passing, the new ruler’s own son is now dying of the contagion. Naturally, there’s also an evil high priest trying to manipulate the situation to his own ends, and who orders the rebellious Lola to be whipped (though the native woman recovers from the ordeal with remarkable rapidity). Thus, by the time Tarzan and Campbell arrive, the scene is set so that the doctor can win the Lionian ruler’s allegiance by saving his son, and the ape-man has a villain to fight. There’s a cool climax, in which Tarzan and the slave girls are entombed but get rescued by the jungle-man’s elephant squadron, and Lola’s blowsy eroticism is defused by pairing her off with a minor comic-relief character.

SLAVE GIRL is mostly just mindless fun, with the bride-stealing trope being the only element that received more portentous treatment in some of the Tarzan novels. Oddly, though Darcel provides one of the more significant support-characters, she gets next-to-last billing. Vanessa Brown, despite paying one of the tougher versions of Jane, was not invited back to the series.

Posted by Gene Phillips at 2:54 PM
Email ThisBlogThis!Share to TwitterShare to FacebookShare to Pinterest
Labels: combative adventures, the uncanny