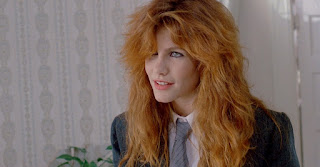 Not long after re-watching WITCHBOARD, I viewed a DVD copy of a more current horror-hit, THE BABADOOK. I have no desire to review the latter, since I think it, like many contemporary fright-films, emphasizes prolonged suffering more than honest shocks or dramatic tension. But BABADOOK did end up making this minor eighties flick look better than it really is.

While no classic, WITCHBOARD at least has a substantial dramatic arc. At a party given by Linda (Tawny Kitaen) and her current boyfriend Jim (Todd Allen), Linda's ex-boyfriend Brandon (Stephen Nichols) shows up. Jim and Brandon were friends for years before they met Linda-- one line defines them as being almost like brothers-- but once Linda dumped Brandon for Jim, the friendship of the two men went down the tubes. Possibly with the idea of showing off to Linda, Brandon brings along a ouija board to entertain the party guests. Brandon claims to have had consistent success in contacting the spirit of a deceased young boy, one David, and he invites Linda to help him summon the spirit through the planchette board. David seemingly manifests through the board but the seance has some ominous overtones, even apart from Jim constantly glowering at Linda's renewed contact with Brandon. (It's an interesting side-note that Jim works in construction while Brandon appears to have a more prosperous occupation, to judge from the car he drives.)

A day or so later, Linda-- who believes herself pregnant by Jim-- feels moved to use the witchboard by herself, apparently motivated by a nascent maternal sympathy for the dead boy. However, the spirit she unleashes begins to cause people to die, such as a worker at Jim's job and a psychic brought in to investigate possible possession. The spirit is eventually identified as an axe murderer named Malfeitor who once lived in the dwelling of Linda and Jim, and it slowly takes control of Linda, though unlike some demons this ghost seems to be able to strike at anyone anywhere.

It's not hard to imagine Malfeitor as a surrogate for Brandon, attempting to wreak havoc on the relationship of Jim and Linda, not least by actually taking over Linda's body and using it to try killing Jim. Oddly, in the final scene Malfeitor, speaking through Linda, claims that hard-headed realist Jim is the real portal for the spirit's mischief, which may speak less to the rivalry of the two men over Linda than to their tension toward one another. Jim and Brandon are in fact somewhat reconciled during their attempt to oust the deadly spirit, though Brandon doesn't live to see Malfeiror defeated. Overall the dramatic scenes between the three main characters are well done, though Linda is not as strongly characterized as the two men, since one never knows much about her except that she believes, falsely, that's she's pregnant. But as noted, I would rather watch a decently executed formulaic drama than a movie devoted to the fetishization of suffering.

Posted by Gene Phillips at 7:48 AM
Email ThisBlogThis!Share to TwitterShare to FacebookShare to Pinterest
Labels: the marvelous