NEXT AVENGERS: HEROES OF TOMORROW (2008) 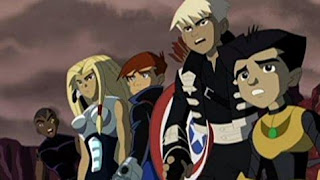 Most attempts to forge “legacy versions” of popular established comics-characters fall flat because the authors are trying to recapitulate the elements of the earlier characters in contrived ways, often to make them appeal to a new generation of readers, to political factions, or to various other considerations having nothing to do with the dynamics of storytelling. Not surprisingly, the third original-to-DVD iteration of the Avengers from this particular animation house is poorly named, for the young descendants of the original Avengers are more “heroes of yesterday” than “tomorrow.”

I won’t bother detailing the particular conglomerations of these “Young Avengers,” since at no time do the writers of the story come up with anything inventive. One of the teens is the daughter of Thor, another is the son of Black Panther, another the son of Ant-Man and Wasp, and the last is the son of Captain America and the Black Widow. The writers’ only concern is to make sure the Cap-kid gets the shield, the Ant-Man kid does the requisite shrinking, and so on.

The basic setup is equally routine. Thirteen years previous, the monstrous mechanoid Ultron slew most of the Avengers. Iron Man fled with the children of his fellow heroes and raised them in seclusion, training them for an eventual reckoning. Ultron finds their hiding-place and sends forth robotic versions of the dead Avengers to slay them and their mentor. The kids learn that one other Avenger, the Hulk, still survives in seclusion, so they go looking for him, aided by yet a fifth Avenger-spawn, the son of Hawkeye.

The Hulk—now sporting the grey hair of an old monster—is the movie’s only saving grace, for he’s allowed to have a rip-snorting battle with Ultron. But all of the rest is just time-killing trivia.

Posted by Gene Phillips at 5:29 PM
Email ThisBlogThis!Share to TwitterShare to FacebookShare to Pinterest
Labels: combative adventures, the marvelous