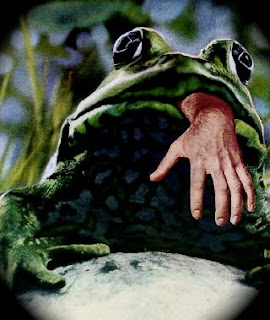 FRYEAN MYTHOS: *drama*
CAMPBELLIAN FUNCTION: *cosmological, sociological*
Prior to his helming of FROGS, director George McCowan had directed three enjoyable tv-movies from the early 1970s-- RUN, SIMON, RUN, THE LOVE WAR, and THE CHALLENGE.  Telefilms were never again as consistently appealing as they were during this period: even though most of the films produced-- including the three I've just named-- were equal parts pulp-action and magazine confessional in tone.
FROGS, however-- one of the "nature gone wild" films that debuted on big screens in the same period-- is not nearly as good as McCowan's TV offerings.  And though FROGS was well-known in the day, and probably made back a good chunk of change, McCowan made only a few more big-screen films and spent the rest of his career in television.
While FROGS has a good recipe for horror-thrills, it doesn't know how to bring anything to a boil.  It starts with your classic "poor meets rich" scenario, as an earnest but poor young ecologist named Pickett Smith (Sam Elliott) meets a rich brother and sister when their boat sideswipes his canoe.  The rich kids, members of a clan called Crockett, take Pickett back to their private island.  While Pickett gets dry clothes he witnesses how all of the Crockett family-members must bow and scrape to their wheelchair-bound patriarch Jason Crockett (Ray Milland).  Naturally, there's a certain amount of friction between ecologist Pickett and the patriarch, who's a classic "nature can go to hell" industrialist.  But while no one expects a movie called FROGS to sport any deep debates about the environment, the script misses several opportunities to play the two off one another.  Indeed, after the sideswiping no one on the island seems to give Pickett any static for being the proletariat, possibly because they're too busy being various species of lazy rich people.
Pickett may not give Jason Crockett hell for his treatment of the environment, but the environment sure does.  There's no reference to any marvelous gimmick that makes the wildlife start picking off the rich people one by one: the animals are just all suddenly pissed-off, apparently.  Snakes, leeches, gators-- all of them unite with a will to take a bite out of ecological crime.
Oddly, the frogs don't do anything directly to anyone, but this is possibly the film's best conceit.  The frogs just sit around croaking while the other animals do all the dirty work, as if the batrachians were the brains of the swamp.  Or perhaps, with their fat bodies, they're more like the spirit of angry maternal nature?  In any case, the title does give the audience what it promises: lots of frogs, eager to see mankind "croak."
Posted by Gene Phillips at 2:47 PM
Email ThisBlogThis!Share to TwitterShare to FacebookShare to Pinterest
Labels: astounding animals (u), the uncanny