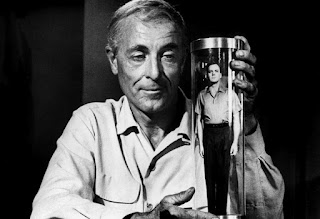 It's only by chance that I happened to rescreen these 2 "mad scientist" films back-to-back, but though they take very different attitudes toward their material, both are alike in that they're designed to center around the performance of one actor who plays a manipulative master of strange technology.  As for all the other actors in both Bert I. Gordon's ATTACK OF THE PUPPET PEOPLE and Norman Taurog's DR. GOLDFOOT AND THE BIKINI MACHINE (partly written by James Nicholson)-- they're pretty much reduced to battling over the scraps of very threadbare scripts.

Bert Gordon was publicized as "Mr. B.I.G." thanks to his repeated schtick of making SF-pictures about entities growing or shrinking.  Most of those films concern the former, since giant men and monsters had already been a sci-fi staple before Gordon's rise to fame, but PUPPET PEOPLE is a rare one about what happens when a bunch of normal humans are shrunk to doll-size by a lonely and disenchanted dollmaker, Mr. Franz (John Hoyt).

Unfortunately, none of the "puppet people" involved-- be it the romantic leads John Agar and June Kenny or a small crew of like-fated comrades-- are particularly interesting.  Had Gordon given these characters some sort of personal dramas to spice up the cheap "little person" effects he used on the film, the film might be better regarded these days.  Viewers can forgive mediocre effects when they're engaged with the characters.  But these characters are no better developed than real puppets.

Franz, then, is the film's sole dramatic focus.  The aging dollmakers suffers from loneliness because his wife left him for another man, so that when he discovers the principle for a shrinking ray, his response is to create a new family by reducing people to doll-sized beings.  John Hoyt is excellent in the role, always conveying a grandfatherly kindliness that makes his looney behavior all the more believable.  The film doesn't tread deeply into psychological territory, but though he's never less than benign to his living puppets, it's probably not a coincidence that the lead romantic couple are prevented from entering the state of marriage by Franz's machinations-- thus, Franz is preventing this union because he couldn't prevent another, more heartbreaking one.

As with the previous (and superior) 1950s SF-film INCREDIBLE SHRINKING MAN, most of the little people's peril stems from large animals, such as a predatory cat and a bellicose dog.  But the inferior FX-work keeps these from seeming like any credible threat.

Though PUPPET PEOPLE is disappointing, it does sport a few clever lines, not to mention some  self-referential bits (the young couple attend a drive-in where Gordon's AMAZING COLOSSAL MAN is playing).  But there's nothing clever anywhere in the Taurog/Nicholson mess called BIKINI MACHINE.

This film also has some self-referential bits: in addition to making the villain's name a hamhanded homage to GOLDFINGER, it reunites Frankie Avalon and Vincent Price, who had co-starred (to use the word loosely) in AIP's 1963 BEACH PARTY, which certainly did more for Avalon's reputation than for Price's.  In addition, Erich Von Zipper (Harvey Lembeck) of the beach films makes a joke cameo, and Goldfoot briefly dons the medieval costume Vincent Price wore for his perf in AIP's PIT AND THE PENDULUM.

But here the in-jokes are merely desperate attempts to fill time in a chaotic melange of slapstick routines that make the Keystone Kops look sophisticated.  The film's only potential saving grace is that it's built around the tongue-in-cheek villain-persona of Vincent Price, and if the viewer likes a lot of Price, BIKINI certainly gives it to him.  In fact, both script and direction pay more attention to Price than they ever devote to the film's other titular gimmick: a few dozen bikini-clad girl robots, whom Goldfoot sends out to seduce and marry wealthy men so that the robots can then kill the rich guys and inherit their money.

Goldfoot is opposed by his fiendish efforts by a bumbling secret agent (Avalon) and a bumbling rich young fellow (Dwayne Hickman).  Fortunately Goldfoot has Igor, his faithful henchman-- except that he tends to, well, bumble.  And then there's robot Diane (Susan Hart, then-wife of James Nicholson), who tends to make a lot of bumbling mistakes...

You get the idea.  Taurog and Nicholson have just one comic bolt in their quiver, and they use it over and over, ad infinitum.  About the only sociologically interesting joke comes at the expense of the whole trope of a mad scientist turning out dozens of robot girls obedient to his every whim.  This joke occurs when Igor unveils one defective robot (Alberta Nelson), who promptly beats up Igor and then talks in a deep masculine voice.  Are the filmmakers saying that only the only way women can rebel against "The Man" (goldfooted or not) is if they are manlike?  No-- probably better not to even ask the question...

Posted by Gene Phillips at 2:37 PM
Email ThisBlogThis!Share to TwitterShare to FacebookShare to Pinterest
Labels: the marvelous