PIRATES OF THE CARIBBEAN: ON STRANGER TIDES (2011) 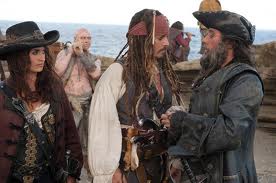 CAMPBELLIAN FUNCTION: *psychological*
By the time Disney made the third PIRATES sequel, I'd become pretty sick of the support-cast provided by the characters essayed by Orlando Bloom and Keira Knightley.  I thought that the idea of a film focused on Captain Jack Sparrow would prove an immense improvement.
I was, sadly, wrong.
To be sure, ON STRANGER TIDES isn't bad because it doesn't have those two support-characters, but because it doesn't bother to dream up new ones.  Sparrow's eccentric crewmen barely get any screen-time, aside from simply taking up space in the background.  His villains-- the infamous Blackbeard, seeking the Fountain of Youth, and his scheming daughter Angelica-- are new.  But whereas the villains of earlier installments became so involved, so baroque, that one often lost track of their motivations, Blackbeard and Angelica are predictable and boring villains.
In addition, TIDES's budget no longer allows for any of the meaningless but kinetically-dazzling sequences, like Sparrow in limbo, having conversations with other versions of himself.  Johnny Depp does an adequate job with the script he's given, but he seems pretty uninspired.  Penelope Cruz may be one of those actors who does her best work in her own language and ends up seeming entirely vapid in any other films.
The best thing about TIDES is that it may put an end to the series at last.
Posted by Gene Phillips at 3:42 PM
Email ThisBlogThis!Share to TwitterShare to FacebookShare to Pinterest
Labels: combative adventures, the marvelous