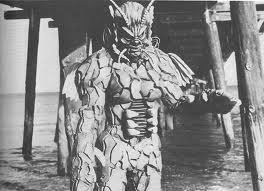 Despite the exploitative title, SHE CREATURE, directed by Edward L. Cahn from a Lou Rusoff script, is a better-than-average journey into fantasy-psychodrama.  Much like Cahn’s CURSE OF THE FACELESS MAN, which came to theatres in the following year, the story revolves around a focal character looking for love in all the wrong places.

FACELESS MAN, following the general theme of the Universal “Mummy” series, dealt with a man-turned-monster who desired the modern reincarnation of a woman he had loved in antiquity, though the script suggests that even the original object of the man’s affection may have viewed him with ambivalence.  SHE CREATURE centers upon a similar quest for thwarted love.  Arguably the focal character is not the titular creature, but the ruthless magician who conjures her up—though one could make the argument that Carlo Lombardi and his reluctant beloved Andrea are two aspects of the same entity, much like Frankenstein and his monstrous creation.

The story opens with Carlo Lombardi (Chester Morris) standing before the ocean, summoning a barely-seen, monstrous shape from the waters, which he sends forth to perform some dark deed (a senseless murder, as it turns out).  The scene shifts to an elegant party at the beachside dwelling of a wealthy family, the Chappels. The Christian connotations of the name seems ironic, given that the head of the family, money-hungry Timothy, has no belief in the supernatural himself but allows his wife, a dilettante in things occult, to bring Lombardi into their house to perform.

Even before the audience sees Lombardi’s act, however, Timothy and his wife blithely regard their daughter Dorothy’s interest in another representative of the less moneyed classes.  Dorothy, having thrown over her fiancée, now pursues Ted Ericksen, a professor of psychic research, with some suggestion that he too may have been invited to the party in order to “perform” for the amusement of the idle rich. Ericksen is somewhat taken with Dorothy but he’s very conscious of the class difference between them, and tells her that despite being a college professor he’s just a “farmboy” at heart, instantly establishing his moral status for the audience.  Timothy Chappel regards his daughter’s lower-class flirtation with amusement, telling his wife that if Dorothy wants him, she should have him, as the “market value” of professors can’t be too high.

While walking on the beach, Ericksen tells Dorothy that he’s encountered Lombardi before, having publicly accused Lombardi of being a charlatan.  Then he and Dorothy see Lombardi himself leave a beachside residence that shows evidence of having been ravaged by some colossal force.  Ericksen finds the house’s occupants slain and reports the murder to the police, who pull Lombardi in for questioning but can prove nothing.  Lombardi’s only reason for having his pet “monster from the surf” slay the innocents seems to have been to set himself up as a “prognosticator,” the better to prove his worth to a paying audience.

Before the police arrive, Lombardi returns to the local carnival where he made his living prior to his encounter with filthy richness.  In his trailer he keeps young Andrea in hypnotic trance, and revives her.  She becomes upset that he left her entranced so long, and expresses hatred for him, though he tells her that she can never escape him.  It will soon come out that Andrea is a medium, through which Lombardi can summon the spirits of her ancestors.  But whereas most hypnotists of the period only summoned ethereal spirits (which Lombardi does do on one occasion), Lombardi can also summon the spirit of a prehuman entity, a fish-woman hybrid, thus extending the idea of reincarnation to take in concepts of evolutionary ancestors. 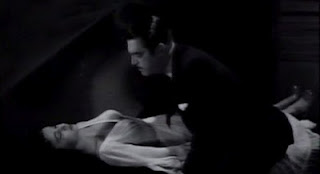 The police bring Ericksen along to identify Lombardi from the murder scene, and so Ericksen has his first encounter with the comely Andrea.  The two fall in “love at first eyeball,” though over half the movie goes by before they have a sustained conversation.  As for Lombardi, not only is he released from custody, his “prediction” garners him the attention he wanted.  Timothy Chappel, who still doesn’t believe in the supernatural, decides that he can exploit the small-time carnival mountebank with a major media push, and Lombardi is only too happy to oblige. Ericksen refuses to help his potential father-in-law by endorsing Lombardi’s powers, railing that Lombardi is a dangerous “quack.”  Some time later, Ericksen rejects Dorothy and sends her back to her original fiancée.

Lombardi has the She Creature kill again, getting rid of a carnival barker who was showing too much interest in Andrea.  In a tense scene Lombardi confesses that he loves Andrea, and that he wants her to love him as well, but despite his hypnotic powers he can’t make her reciprocate.  Rather like the “Jaffar” character in the 1940 THIEF OF BAGHDAD, Lombardi’s love is real enough that he won’t satisfy himself with her hypnotically enthralled body.  Andrea complains to Lombardi that “you’ve taken my soul.” But though she apparently allowed Lombardi to hypnotize her in their earliest encounters—a permission that could be seen as allowing him quasi-sexual access—she increasingly rebels against the idea that this carnival-bred “Satan” can possess her soul.

One odd development takes place when Lombardi’s fame begins spreading.  Because Lombardi has moved into the Chappel house due to his being fired from the carnival, Timothy suggests that the hypnotist strike out for greener pastures.  Plainly Timothy’s willing to make money off Lombardi but doesn’t really want to associate with him.  In terms of story-logic, there isn’t really any reason for Lombardi to stay at the beach, unless he needs to be close to the ocean to summon the She Creature-- though nothing of the kind is articulated. Given Lombardi's suspicions of Ericksen’s affection for Andrea, it seems that the hypnotist would’ve benefited had he left.  Yet Lombardi refuses to leave.  Partly this is because the story needs Lombardi and Andrea to stay close to Ericksen, and the movie’s low-budget production values wouldn’t have allowed for a new location.  But Rusoff’s script makes Lombardi’s refusal seem logical.  Though he’s thoroughly immoral, Lombardi is nevertheless a genius in the realm of the psychic.  Yet he’s despised for his low-class origins by the rich and distrusted by Ericksen, man of science, because Lombardi knows more about the psychic world than the “farmboy” does.  Lombardi has an encounter with Ericksen in which he encourages the professor to disprove his techniques, and he plainly hungers for the chance to be vindicated for past humiliations.  Thus he stays close to the Chappels, and to Ericksen, even though this will bring about his doom. I note here that Chester Morris gives a marvelously subdued performance as Lombardi, capturing the magician’s status as an “egomaniac”—one of Ericksen’s few accurate insults toward Lombardi—without the usual florid actors’ characterizations of egomania.

At one point Lombardi witnesses Ericksen and Andrea conversing on the beach.  Filled with jealousy, Lombardi mesmerizes the Chappel’s dog (which has been present throughout the story, showing as much hostility to Lombardi as does Andrea) and sends the canine to attack Ericksen.  But Andrea faces the dog down and chases it away, implicitly tapping into the power of the She Creature to terrify the animal.

At the climax Lombardi once more demonstrates his control over Andrea before a high-class audience at the Chappel home.  Unbeknownst to that audience, Lombardi, having suffered a slight from Timothy, conjures up the She Creature.  The monster kills Timothy.  Then Lombardi brings the She Creature onto the stage and attempts to make it kill Ericksen.  But the creature responds to Andrea’s need to protect Ericksen, and kills Lombardi instead.  With his last breath Lombardi proves his love for Andrea by releasing her from his thrall.  Strangely, though the apparition of the creature retreats back to the primal ocean, Ericksen chases it and gets the police to shoot at it, even though it’s turned invisible by this time.  Perhaps Ericksen’s actions are understandable given that he’s just seen the creature for the first time and perceives it as a threat, though it’s clear to the audience that the creature will never return with Lombardi dead.  Equally, director Cahn may’ve wanted to end the film with some spectacular violence, after the fashion of his CREATURE WITH THE ATOM BRAIN.

SHE CREATURE bears a perhaps coincidental resemblance to the legend of Simon Magus and Helen, as I recounted in my review of THE SILVER CHALICE.  Lombardi is, like Simon Magus, a figure who combines aspects of the bonafide magician and the charlatan.  In CHALICE as in some versions of the Simon legend, the magician travels with Helen, a “holy prostitute,” and Andrea’s presence at the carnival is explained early on when the barker says she was a “carnival-follower”— which is certainly just a new take on the traditional “camp-follower,” meaning a prostitute who followed army camps.  Yet if Andrea was a prostitute, she’s still capable of falling in love and rebelling against the influence of Lombardi, and of using the violence of the “She Creature” to vanquish her personal demon.  Though the film ends with an ambivalent “?,” there’s no real sense in the script that the She Creature is likely to return, as every negative aspect of Andrea’s persona has been banished by true love.