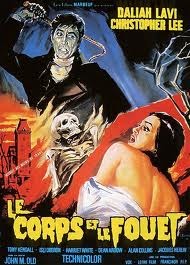 
I'll forego the usual praise for director Mario Bava's handling of WHIP's vibrant (and appropriately, sometimes violent) color cinematography.  What I'll focus on instead is the question: what does it mean to inject the standard Gothic-horror plot with overt references to sadistic sexuality?

One may argue, of course, that the history of the two coincides rather neatly, the period of Gothic fiction's first bloom of popularity from the late 1700s to early 1800s overlaps the noteworthy life and career of the Marquis de Sade (1740-1814). But most Gothic films, like the prose fiction which served as their models, did not overtly explore Sadean themes.

Bava and his screenwriters (all of whom had, like Bava, considerable experience in both Italian horror and adventure films) begin with a simple sounding story of Kurt (Christopher Lee), a "black sheep" aristocrat returning to the castle occupied by his father, his younger brother Christian, the brother's wife Nevenka (formerly Kurt's betrothed), female cousin Katia and an old serving-woman.  The serving-woman hates Kurt because he trifled with her daughter, who then committed suicide and somehow blackened Kurt's name enough that his father exiled him and transferred the family patrimony to Christian.  One gets the sense that Christian was obliged to marry Nevenka as some sort of aristocratic package-deal, for neither loves the other. In fact, Christian's in love with his cousin Katia.

Though Kurt has ostensibly returned to the fold to congratulate his brother on his wedding, he later confronts his father, demanding the return of his patrimony.  The father refuses.  Later Kurt encounters Nevenka alone on a beach and attacks her with a whip.  He's pleased to see that she still relishes his blows, telling her: "You haven't changed, I see. You've always loved violence."

Shortly thereafter, Kurt is knifed to death, and interred shortly thereafter.  Suspicion hovers around the serving-woman who hated Kurt-- but is Kurt really dead?  Nevenka sees him staring at her through windows, tormenting her with his ghostly-seeming voice.  Shortly thereafter the father is knifed in his bed in the same manner, and Christian vows to get to the bottom of the murders.

The "whodunit" angle of this Gothic isn't especially surprising.  It's finally revealed that kinky Nevenka committed both murders, and the film ends with her killing herself in the belief that she's knifing to death the resurrected corpse of her mesmerizing lover.

Without question, the entire film is built around Bava's exploration of the dynamic of sadism, for the inhabitants of the castle live in virtual isolation from the rest of the world, more like the retiring Ushers of Edgar Allan Poe than any real-life aristocrats.  Given one's knowledge as to how rarely aristocrats of earlier centuries were condemned for maltreating peasants, it's a little surprising that Kurt's father should have retaliated against Kurt's indiscretion by disinheriting him.  Though none of the characters could be called three-dimensional, one may hazard that the suicide of Kurt's conquest is merely an excuse for the imperious father to reject his arrogant older son in favor of the more pliable younger one-- a less harmonious rewriting of the "prodigal son" narrative.  That Christian is essentially a milkwater offspring--- despite the way he tells Kurt at the beginning that he's "never been afraid of you"-- is attested by the fact that he has agreed to marry Nevenka despite his abiding love for Katia.  Whereas Poe never directly references incest in the "House of Usher," the unnatural closeness in Bava's tale- involving two brothers, their cousin and the woman both brothers share-- suggests a ruder conception such as one finds in some of the folktales chronicled by Otto Rank, in which two brothers struggle to possess a sister or half-sister.

Katia never comes alive as anything but a throwaway character with whom, the ending loosely implies, Christian may still be united.  Nevenka is a different story.  The film never tells us how she became habituated to Kurt's violent attentions, but it's implied that her passion for violence is her real nature, as against the phony public appearance she keeps up as Christian's wife.  And yet, if she's a masochist, she's far from a doctrinaire one.

Though Kurt's murder takes place on screen in such a way as to conceal the murderer-- rather clumsily in my opinion-- one later wonders why she did it.  The English language dub, at least, contains no explanation as to why she killed him, much less Kurt's father.  Possibly a part of her becomes so taken with Kurt's sadism that she subconsciously imitates him, going him one better by taking the violence to the point of murder.  Alternately, perhaps a part of her resents being "on the bottom" all the time, and she takes out her frustrations on Kurt-- only to have her guilt propel her into killing Kurt's unforgiving father, perhaps out of the notion that Kurt would have wanted him dead.

I can no longer remember if the scenes of Kurt's "ghostly" appearaces held any conviction for me on my first viewing of WHIP, which I'm sure I saw in its chopped-up American release, bizarrely entitled WHAT!  But I don't think that the ghost-scenes are terribly credible, and for some viewers Bava probably tips his hand by having only Nevenka witness Kurt's return.

WHIP is interesting for toying with adult subject matter in this time-period, but in the final analysis Bava and his writers don't quite succeed in making Nevenka's mixed-up fetishism all that symbolically compelling.  I wonder what might have been done with the same story, had it been executed with a more aggressively feminist outlook?
Posted by Gene Phillips at 3:46 PM
Email ThisBlogThis!Share to TwitterShare to FacebookShare to Pinterest
Labels: bizarre crimes and crimefighting (u), phantasmal figurations (u), the uncanny, weird families and societies (u)