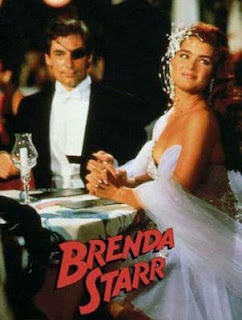 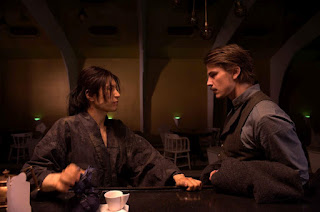 
These two films stand out from most of those in the "marvelous" category in that their marvels aren't "bodied forth" in the usual paraphernalia of fantasy-films-- wizards, robots, et al-- but in portraying societies that are just slightly different from our own.  They come very close to residing within the category of the uncanny, "weird families and societies," but on analysis they do have some slight aspects to divorce themselves from the primary world.

With the famed flop BRENDA STARR, the bare conceit that makes it "marvelous" is that Brenda (Brooke Shields), a character in a comic strip, inhabits her own reality distinct from ours.  In our world, though Brenda's 1940s adventures are drawn by a modern-day artist named Mike, she first rebels against her depiction by talking back to the artist from his drawing-board.  She then flees from his presence, which somehow makes it impossible for Mike to draw her.  Thus he draws himself into her world so that he can persuade her to come back.

STARR, which sat on a shelf for three years before being released to an apathetic public, isn't a total loss.  Though director Robert Ellis Miller doesn't seem to have done anything else quite like this fanciful effort, he and his collaborators succeed, at least visually, in capturing the period charm of the 1940s.  It goes without saying that Miller and Co. play some of the period's innocence and efferverscence with a knowing sense of "camp," but the camp elements are lightly stressed, and sometimes give way to simple farce.  Only once or twice do impossible "comic-strip" things transpire in Brenda's world.  In one scene, she and Basil are riding the same horse, which by narrative magic suddenly turns into two horses that they're separately riding. In another scene-- possibly the closest the film ever comes to exploiting the concept's absurdity-- Brenda escapes her pursuers by mounting a pair of alligators and riding them like waterskis.

The plot, which takes place almost entirely in Brenda's world, involves the intrepid lady reporter attempting to prevent the Nazis from obtaining a secret formula, and then of course, writing about it.  In this she's aided by the mysterious eyepatched adventurer Basil St. John (also from the original comic strip) and, of course, by the usually inept artist Mike.  Ranged against her are a coterie of comic Nazis and a competing lady reporter, whose name Brenda can never repeat without seething: "Libby Lips!!"  During assorted far-flung adventures both Mike and Basil fall in love with the always-elegantly coiffed Brenda, but after the Nazis are thwarted Mike's obliged to return to his own world and to confine his interaction with Brenda to drawing her.

Shields is consistently enjoyable, managing to keep her buoyant character refreshing despite the lightweight plot, and Timothy Dalton keeps in step by playing Basil St. John with restraint.  However, the rest of the actors have nothing to do but chase Brenda around, and none of the fights or pratfalls ever sparked my interest, even with the participation of a capoeira troupe.


BUNRAKU, in contrast, exists in just one world, a vague future society poised between the culture of the American Old West and samurai-era Japan.  Unlike many future worlds in the MAD MAX vein, where technology has been wiped out, the opening voiceover explains in quasi-mystical terms that in keeping with cosmic verities the world just finally gave up all firearms and embraced only non-technological weapons: swords, arrows, and a few other martial-arts devices.  And yet the inhabitants of this "East/Westworld" do have access to other types of technology, as when the villain Nicola rigs a card-game by using remote devices to spy upon the cards held by his opponents.

The best way to explain the sociological matrix of BUNRAKU might be to say that it's KILL BILL as written by the Coen Brothers.  The main theme is still vengeance, not of one character but two: the nameless western boxer "Drifter" (Josh Hartnett) and the samurai warrior Yoshi (Gackt), who seek redress of their grievances against Nicola (Ron Perlman).  However, as the two heroes are guided by a helper-ally (bartender Woody Harrelson) in their battles against Nicola's horde of assassins and henchmen, some if not all of the characters frequently spout rather windy bits of philosophy, meant to imitate the soulfulness of samurai films and spaghetti westerns.  In this respect writer-director Guy Moshe is not successful: while Tarantino brought his own weird perspective and sense of humor to the genre-remixings of KILL BILL, Moshe's "deep thoughts" on topics like "the destiny of a warrior" never seem more than pedestrian.

That said, BUNRAKU is still a good action-movie mashup.  While the fight-sequences aren't quite bracing enough to turn Jet Li or Jason Statham green with envy, the choreography is better than average and things are never allowed to get dull-- except maybe when Demi Moore, playing Nicola's pregnant concubine, is on the screen; try as she might, Moore can't do anything with her marginal and forgettable character.  As with many "male bonding" films the unison of Yoshi and the Drifter very nearly takes precedence over their many colorful fights with Nicola's men, though on occasion director Moshe allows certain plot-contrivances to come about simply because it suits his humor, rather than any logic.

Perhaps the film's most amusing genre-commenting moment appears when the bartender attempts to illustrate his concept of the hero's journey to the Drifter by essentially retelling the origin of Marvel Comics' Spider-Man using a pop-up book.  No character who actually resembles Spider-Man ever makes an appearance, of course, but there is a dead ringer for J. Jonah Jameson.  It's hard to hate a film that goes to that level of obscurity to stoke fannish flames.