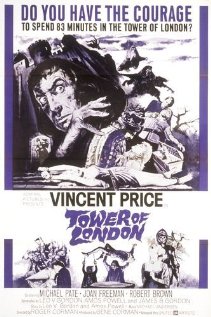 The strongest resemblance between 1962’s TOWER OF LONDON and 1969’s OBLONG BOX is that both are tangentially based on works by esteemed literary authors, though both were aimed at a 20th-century horror-film audience.  Further, according to my system, both films are works of “the uncanny,” though the literary originals were both of a “naturalistic” phenomenality—in contrast, say, to the way HAMLET, an “uncanny” play, was adapted into a work with the same phenomenality.

There’s also a more fragile connection in that OBLONG BOX follows in the line of a series of Edgar Allan Poe popularizations launched by Roger Corman for AIP.  OBLONG BOX was also an AIP film, but Corman had no association with it.  He did however direct the quasi-Shakespearean TOWER OF LONDON, but another studio, United Artists, distributed TOWER.  Of the two, neither TOWER nor BOX is as rewarding as the Poe films from the early 1960s, or, for that matter, Rowland Lee’s 1939 TOWER OF LONDON, a Universal Studios film that also contributed considerable inspiration to Corman’s work.

Corman’s Poe films demonstrate that the director could, under the right circumstances, tap into a fascinating level of visual derlirum, particularly in 1960’s HOUSE OF USHER and 1965’s TOMB OF LIGEIA.  But whether one regards Corman’s TOWER as more influenced by the Shakespeare play RICHARD III or the aforementioned Rowland Lee film, the writing and direction of the 1962 movie are businesslike and pedestrian, evincing a style closer to Corman’s 1956 melodrama SWAMP WOMEN than to any of the Poe works.  TOWER comes alive somewhat when Vincent Price, playing the murder-happy usurper Richard III, struts his stuff.  But when Price is not on screen, most of the other performers stand around stiffly reciting their lines as if confined to a stage in truth.  None of the other characters come alive as personalities, and so TOWER sometimes feels like a one-man show with a support-cast.  This was not the case with the 1939 TOWER OF LONDON.  Rowland Lee’s script wasn’t on the literary level of Shakespeare, but the characters possessed considerable individuality, memorably Mord the Executioner, the non-historical right-hand man to Lee’s version of Richard III.  Corman’s TOWER includes a nasty executioner, but he’s a negligible character, barely interacting with Price’s Richard.

To my recollection Rowland Lee’s Richard III does not see ghosts as the Shakespeare version does, albeit only at the very end of the play.  In any case I regard both that film and the play as “naturalistic.”  Because the ghosts seen by guilty Richard in the play are nothing more than brief presences conjured by his guilty conscience, they do not take on a symbolic value that exceeds a naturalistic phenomenality.  But in Corman’s TOWER, Price starts seeing specters almost as soon as he starts his medieval murder spree, though no one else does.  This approach seems to be Corman’s method of layering the persona of Poe’s demon-haunted protagonists over the historical persona of Richard III, so as to make the would-be king more appealing to patrons of the horror-movie genre.

I want to be very clear that I’m not saying that Corman’s TOWER OF LONDON is “uncanny” simply because there’s a chance that the ghosts may be real (although Corman does leave that possibility open).  As I maintained in my essay THREE INTO TWOWILL GO, SOMETIMES, I’m talking about a symbolic value that the ghosts assume in the narrative, *even when* it’s entirely evident that they’re unreal.  For that reason Corman’s TOWER OF LONDON qualifies for the trope-category “phantasmal figurations." 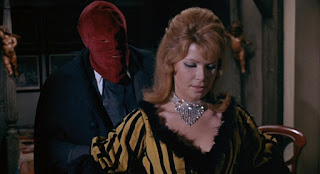 Gordon Hessler’s OBLONG BOX presents (to jumble my metaphors a bit) a more mixed bag.  Poe’s “Oblong Box”—far from one of his best-known tales—has a few macabre touches but essentially remains a naturalistic mystery.  The viewpoint character, traveling by steamship with an acquaintance named Wyatt and Wyatt’s party, is puzzled by two enigmas: why does Wyatt keep a huge “oblong box” with him in his cramped quarters, and why does Wyatt’s wife seem to be, in the narrator’s opinion, “a person altogether beneath [Wyatt]”?  Both enigmas prove to have one answer: the woman represented as Wyatt’s wife is an actress, and the real wife is dead inside the oblong box, kept secret because Wyatt feared that the ship would not transport a corpse.

The only thing that scripter Lawrence Huntington (who worked with Hessler on future projects as well) *may* have taken from the Poe story is the element of imposture.  Wealthy English gentleman Julian Markham (Vincent Price) wishes to be married, but has to attend to mad brother Edward, whom Julian keeps locked up in his mansion.  Edward’s madness stems from a vague colonialist venture the brothers undertook in Africa, during which time Edward fell afoul of a native tribe.  The tribe, believing Edward guilty of a crime Julian actually committed, disfigured Edward and possibly cursed him as well (the story is vague about whether it means to evoke “real magic” or not).

Julian’s buried wishes to be rid of his burden seem to come true when Edward apparently dies.  Julian has managed to keep his sibling’s deformity a secret from the locals, but with noblesse oblige Julian feels that he must offer the citizens a good-looking corpse at the funeral.  This causes Julian to get mixed up with a group of bodysnatchers affiliated with Doctor Neuhart (Christopher Lee).  Meanwhile, though Edward is buried, he’s actually still alive, and is rescued from real death by Neuhart’s graverobbing friends.  Edward, who hides his face behind a scarlet mask, blackmails Neuhart to provide him with shelter while Edward plots revenge on his brother.

The biggest problem with Huntington’s script is that it wastes far too much time on the bodysnatcher gang, none of whom are interesting even as minor villains, including Lee’s doctor.  Moreover, their activities detract from the central “sibling rivalry” plot, taking up time that might have been used to expand on the relationship of the brothers.  As presented Julian and Edward are just routine stereotypes.  There’s no clue about how they felt about each other before Edward was disfigured for Julian’s crime, and though Julian has a moment regretting the imperialist evils they committed in Africa, Julian’s only explicit crime—the one for which Edward is unjustly punished—consists of riding his horse down a trail and accidentally trampling a native boy.  While this is a horrible crime, it doesn’t possess much in the way of sociopolitical content.

A more apposite misdeed might have been the old “white imperialist deflowers native girl and brings about her death” motif.  Had Julian done this, then his desire to be happily married in England, to be free of a sexual misdeed committed in a colonial world, would have resonated better with the fate intended for Julian but imposed on Edward: mutilation designed to make the victim look ghastly in the eyes of the opposite sex.  Further, Edward’s dalliance with a hooker at a drinking-pub—ironically the film’s best sequence, though it’s irrelevant to Edward’s quest for vengeance—would have reinforced the image of the aristocracy as predators on the disenfranchised in all cultures. (To be sure, though Edward’s adventure at the pub erupts in violence, it’s the fault of a greedy pimp trying to blackmail a member of the upper class.)

Edward’s mutilation is revealed to viewers at the climax, but it’s not much of a revelation.  Makeup-quality aside, this aspect of BOX evokes the “freakish flesh” trope, even as Edward’s “Phantom of the Opera”-like mask participates in the trope of “outre outfits.”   Only at the very end is there a slight suggestion of the supernatural: Julian shoots Edward fatally, but before dying Edward bites Julian’s hand.  The film ends with Julian becoming slowly disfigured—but is it the result of an African curse, at last finding its way to its true victim?  Or is Julian’s own flesh mutating to emulate the punishment that should have been his all along?  Because the evidence for the appearance of “the marvelous” seems so scanty, I categorize OBLONG BOX as another film of “the uncanny.”

Hessler would use some of BOX's plot-elements in 1971’s MURDERS IN THE RUE MORGUE, with somewhat greater aesthetic success.

Posted by Gene Phillips at 3:01 PM
Email ThisBlogThis!Share to TwitterShare to FacebookShare to Pinterest
Labels: freakish flesh (u), outre outfits (u), phantasmal figurations (u), the uncanny