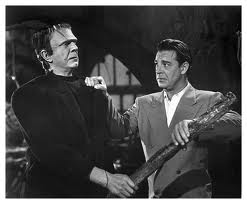 As others have pointed out before me, FRANKENSTEIN MEETS THE WOLF MAN (henceforth MEETS) feels much more like a sequel to the WOLF MAN than an entry in the FRANKENSTEIN series.  This is likely because Curt Siodmak had scripted Lon Chaney Jr.'s previous werewolf-adventure, so most of the scenes involving characters from the first film-- mainly luckless lycanthrope Larry Talbot (Chaney) and his unofficial godmother, the gypsy Maleva (Maria Ouspenskaya)-- are played with a good deal of emotion, and an almost poetic intensity.

In contrast, there's some evidence to suggest that Siodmak was rather more cavalier toward the history of the Monster.  As most horror-mavens know, the film, picking up on continuity from GHOST OF FRANKENSTEIN, had to incorporate a Monster who was no longer the agonized mute presence of most earlier films, but one who had been given the brain of the scheming hunchback Ygor, played in GHOST by Bela Lugosi.  Additionally, the Monster-- now to be played by Bela Lugosi-- had been made blind as a consequence of the climactic outcome of GHOST.  Reputedly, someone in production didn't like seeing the Monster talk with the voice of Bela Lugosi (or alternately, found Siodmark's dialogue for the creature rather risible).  Thus all the Monster's dialogue was cut, returning him to a de facto mute status, and references to his blindness were elided as well.  If some accounts of Siodmak's dialogue can be believed, then this might have been the best solution possible.

The film begins with what is easily one of the scariest scenes in the history of Universal horror-films, when two grave-robbers desecrate the tomb of the late Larry Talbot.  The full moon happens to have risen, and-- in a scene partly left to the imagination-- Larry comes back to life and brings about the death of one robber.  Later Larry's found in the Welsh city of Cardiff, suffering from a huge head-wound, a legacy of the deadly wound he received from his father at the end of WOLF MAN.  At a local hospital Larry becomes the focus of interest by the head surgeon Dr. Mannering (Patric Knowles) and by a local constable, neither of whom believes Larry's claim that he's a dead man who's risen from the grave due to being a werewolf.  Larry, heartsick over the deaths he's already caused and may continue to cause, escapes to contintental Europe, looking for a means by which to extinguish his unnatural life.

Coming into contact with Maleva, the gypsy woman whose son cursed Larry with werewolvism, she leads him to the village of Vasaria.  There Larry hopes to unearth the "secrets of life and death" discovered by the late Doctor Frankenstein.  Unable to find them by rooting around in the doctor's castle, which was destroyed at the beginning of GHOST OF FRANKENSTEIN, Larry manages to draw Baroness Frankenstein (Ilona Massey) to Vasaria to help him find a scientific way to end a werewolf's life.  (It never seems to occur to Larry to simply get someone to shoot him with a silver bullet, but had he done that, there would've been no story.)  Showing up uninvited is Doctor Mannering, who still doesn't believe Larry's a werewolf but does believe he's killing people during his wanderings in Europe.  Despite not being in the body-resurrection business himself, Mannering is intellectually seduced into becoming the new Frankenstein in town. Elsa lends her help with the understanding that Mannering won't give new life and strength to the Monster as the creature wishes.  She wants Mannering to destroy both monsters.

All of this sets the stage for a truly slam-bang finale, when Mannering brings the Monster to life instead of destroying him and the Wolf Man.  It's not clear why the temporarily-mad doctor doesn't just let Larry be destroyed-- he apparently only cares about seeing "Frankenstein's creation" at its full power.  But when the Lugosi-Monster regains its full powers (and in the original version, his sight), he nearly kills both Mannering and Elsa, and is only prevented by the intrusion of a berserkergang wolf man.  It's a fun fight, which I still enjoy watching even now that I can see a lot of the "flubs" in the continuity.

The plot's rather rickety compared to earlier entries. During the time when Larry's trying to get the Baroness' cooperation, the Frankenstein Monster, who's supposed to be hiding in the castle's remains, comes lumbering into Vasaria for no clear reason.  Logically this action should have resulted in the villagers storming the castle to kill the creature and anyone with him, but the town mayor holds everyone back, and even allows Mannering to order new equipment to pass through the town on its way to the castle.  Again, the real reason is just that the script doesn't want the villagers to retaliate until the very end of the film.

MEETS is much better in terms of character touches than plot, fortunately. Larry's overtures to the Baroness take place during Vasaria's festival of the new wine, and Larry ends up losing his cool when he, the eternal outsider, gets upset by some song-lyrics concerning "living eternally."  Knowles and Massey  perform yeoman service with characters who are not that deep but must undergo quick shifts of emotion, with Knowles' temptation-scene a standout.

Much commented-upon is the irony that Bela Lugosi, having passed on the 1931 FRANKENSTEIN early in his career, accidentally ceded that spotlight to Boris Karloff, who became one of Lugosi's principal rivals for horror-roles.  Many critics have not been kind to Lugosi's performance, even given knowledge of the extensive "surgery" done on the film's original story.  But as I commented earlier, Siodmak didn't exactly exert himself to provide the Monster with good character-scenes, and those he did provide might have proved laughable.  I'll add that I don't think Karloff could have done any better with this material than Lugosi did, and that Lugosi's performance, though far from perfect, still has more strong moments in it than does Lon Chaney Jr.'s in the same role.  Also, some of Lugosi's better scenes may stem from the direction by Roy William Neill, in that he puts forth a much more inventive set of visual sequences than anything in the Chaney GHOST.


Posted by Gene Phillips at 2:32 PM
Email ThisBlogThis!Share to TwitterShare to FacebookShare to Pinterest
Labels: the marvelous