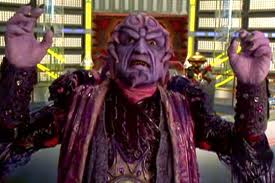 
Like many films built around continuing teleserials, the two POWER RANGERS movies always seem hard-pressed to put across why audiences should care about the characters or their situations.  The elements that usually seem to vanish from movie adaptations include (1) the ability to work well with an ensemble of characters (see also most of the STAR TREK feature-films), and (b) a strong central conflict.  In a serial television show, it's a given that every episode, whether directly linked or not, gives the viewer a cumulative sense of the characters' world.  Thus it doesn't matter so much to many viewers if a given episode sports a weak villain or central conflict; the teleseries' charm is its "continuing adventures."

The 1993-96 POWER RANGERS teleseries, which was the main influence on these two movies, had two things that lifted it above the ranks of the usual juvenile live-action cheese.  One element was contributed by the makers of SUPER SENTAI, the original Japanese series from which RANGERS was derived, for the design-work for the series' bizarre / goofy villains was far superior to similar work in American live-action juvenile TV entertainment. The other element was what the American producers brought to the table.  As most fans know, the American producers of POWER RANGERS edited out everything in SUPER SENTAI that denoted Japanese culture or the Japanese identities of the heroes and shot new scenes of the heroes' secret identities as potrayed by English-speaking actors.  I don't know to what extent SENTAI included scenes of the heroes' alter egos holding martial-arts battles with various villains' henchmen, but in any case the American version did a bang-up job in terms of choreographing the new fight-scenes, making them imaginative yet keeping the violence fairly "clean" and antiseptic (though the series was roundly criticized by parental-watch groups anyway).

The first film, whose full title is MIGHTY MORPHIN POWER RANGERS: THE MOVIE, proves a lackluster take on the teleseries.  The Rangers barely get a chance to have a lackluster battle before their new nemesis "Ivan Ooze" deprives them of their powers and almost destroys their co-ordinator/mentor Zordon.  Zordon survives and sends the heroes on a quest to another planet to find new empowering weapons.  They find them, fight a few more demonic henchmen in an even more forgettable battle, return to Earth and kick Ooze's butt. The end.

Director Bryan Spicer can't do much with this lackluster script, produced by two guys with no previous association with the teleseries.  As the villain Paul Freeman is given numerous attempts to camp things up, possibly because the producers were just so thrilled to get the guy who played Indiana Jones' best villain.  Like the villains in the teleseries Ooze is meant to be slightly comic at times, but in contrast to the frustrated villains of the regular series, he lacks any particular charm or vocal peculiarity.  Said regulars, Rita Repulsa and Lord Zedd, make a glorified cameo in the story, and outclass Ooze in terms of costumes alone.

In contrast, the second and last film in the franchise-- full title TURBO: A POWER RANGERS MOVIE-- is co-directed by two men.  One is David Winning, who like Spicer was largely a TV-show director, but whose work seems far better photographed and paced than Spicer's.  His collaborator is Shukim Levy, who had a long history writing, directing, and composing for the regular teleseries.  His participation suggests that someone in charge of the franchise may've decided that the second movie needed to have more of the wonky feel of the teleseries.

In terms of its villain, TURBO definitely outclasses the previous film.  The opponent here is the oddly-named Divatox, a wildly-clad sorceress whose player (Hilary Shepard) seems to have taken the same florid, over-the-top approach as Carla Perez (the teleseries' Rita Repulsa, who again gets a brief cameo along with her buddy Lord Zedd). Divatox's evil scheme-- to force a good hobbit-like wizard to help her release an evil volcano-demon-- isn't less corny than the master plan of Ivan Ooze, but the script, on which Levy also worked, keeps the script moving with assorted complications.  Even the intrusion of a grade-school-age Power Ranger is handled with enough aplomb to keep it watchable-- which is something George Lucas did not accomplish with his kid-protagonist in THE PHANTOM MENACE. 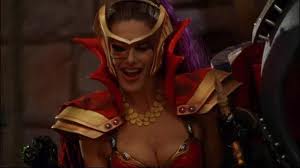 And just as Divatox's costume emulates the wild apparel-designs of the teleseries, TURBO, while not exactly fast-paced, does climax in one big lively fight at the end.  In addition, the fight benefits from a plot-thread in which the villains turn two Power Rangers, Kimberly (Amy Jo Johnson) and Jason (Austin St. John), into their evil servants.  Given that all the English-speaking actors on the series were always obliged to be disgustingly goody-goody, it's fun to see a character like Kimberly's looking pleased with her evilness (and pretty sexy because of it!)

BTW, the only reason I class these films under the "metaphysical" function is because they deal with a basic "good vs. evil" conflict, though that's not to say that either does well with these concepts.
Posted by Gene Phillips at 2:31 PM
Email ThisBlogThis!Share to TwitterShare to FacebookShare to Pinterest
Labels: combative adventures, the marvelous