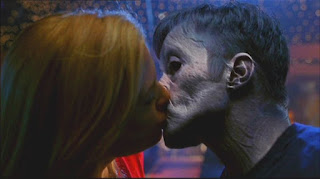 Three of the next four episodes of Season show an increasing preoccupation with not just the mythology of Superman, but that of Classical Greece as well


“Nocturne” introduces Byron Moore, who seems to be a dark counterpart to sunny-dispositioned Clark Kent.  Lana meets him when the teen boy writes her love-letters, though he doesn’t attend the high school and appears to live in seclusion with his parents on their farm.  Despite his eccentricities, Lana’s somewhat fascinated with Byron, comparing him favorably with Clark; she puts down Clark for being an unfeeling “man of steel” when Clark disses Byron’s poetry. Interestingly enough, Lex shares Lana’s interest in poetry, claiming that it’s “all about seduction”—a definition that proves interesting in view of Lex’s relationship to Lana in later seasons.  However, Byron isn’t being kept hidden because his parents believe in home-schooling.  A somewhat fuzzy backstory establishes that eight years ago Byron took part in experimental tests performed by a subsidiary of Luthorcorp.  The tests mutated him so that whenever he’s out in the sunlight, he morphs into a super-strong, vampiric-looking monster.  Eventually Clark is able to get Byron out of the sunlight and render him manageable, so that Luthorcorp can work on his illness (though he’s never seen again).


In more far-reaching plotlines, Martha—who up to this point has acted as if she had no past acquaintance with Lionel Luthor—is hired to be Lionel’s secretary.  She does so in part to allay the Kents’ continuing financial problems, but Martha also nurses a desire to break out of the routine of farmlife and use the legal skills she mastered at college.  Both motivations, of course, contribute to Jonathan’s sense of being “unmanned” by rich and educated competitors.


Lex tells Lionel than Lex isn’t pleased to see his father meddle in the Kents’ lives.  Lionel insightfully wonders if Lex thinks that if he acts “good,” a kind adoptive family will take him in. Lionel then provides his own mythological take on adoption, rewriting Greek myth to claim that Prometheus was adopted by Zeus but was direly punished the will of his “father.”  The metaphor’s rather confused, as it’s not clear whether Lionel is putting himself in the position of Zeus, or suggesting that Jonathan Kent would prove equally unforgiving if he did “adopt” Lex—which does happen, in an informal way, with Pete Ross in “Duplicity.”  In any case, Lionel definitely suggests that Lex is one of the “gods” and can only suffer from mingling with lower beings.


“Redux” proves rather confusing in that Clark’s new antagonist has super-powers but seems to have had them long before any meteor rocks crashed to Earth.  A couple of teen boys perish of old age, and it eventually comes out that a new teen girl at school, Krissy by name, is actually a woman who’s been de-aging herself since the 1920s.  She also preys on Mr. Reynolds, the school’s new principal, who has an old grudge against former student Lex.  A more transitory plotline appears when Martha tries to persuade Jonathan to put aside a decade-old grudge against her lawyer-father and accept his financial help; this gives Clark a chance to connect with a grandfather he barely knows, though the old man largely seems to represent another threat of “the City” to country-boy Jonathan.  In addition, Lana discovers an old photo and jumps to the flimsy possibility that she may be the child of another man than her official father.  Lex warns her of the fate of Pandora, who suffered for prying into secrets.  The citation of Pandora generates an interesting resonance with the previous episode’s mention of Prometheus, in that in some versions of the story Zeus sent Pandora to Earth to plague mortals with evil after Prometheus had given them the godly gift of fire.  On  a trivia-note, the episode mentions “Coast City,” one of many fictional locations in the DC comics-universe.


“Lineage” emphasizes two claims to confused birth-origins, though one of them is manifestly untrue, as an unstable middle-aged woman named Rachel (probably named for the distraught mother of the Bible) claims that Clark Kent is her long-lost son Lucas—as well as the bastard child of Lionel Luthor.  When Lex is apprised of her claim, he’s somewhat taken with the possibility of being Clark’s half-brother, but naturally the Kents are positive that Clark’s mother can’t be anyone born of mortal flesh.  Rachel tries to make Lionel confess to his parentage by kidnapping Lex. Clark stops her, and she witnesses his inhumanity, thus stopping her from making any further claims on him— while her madness presumably keeps any of her wild stories about Clark from being believed.  Lana, for her part, finds out that the man in the photo is one Henry Small, who’s something of a bucolic aristocrat in that his family founded and gave their name to “Smallville.”  She seeks him out but he initially rejects her.  The episode ends without him confirming or denying his possible parentage.


The main importance of the story is that “Lineage” finally establishes both the process by which the Kents made certain of their adoption and how they forged their first acquaintance with the Luthors.  Shortly after finding Clark and the spaceship, the Kents happened upon Lionel in dire need of transportation to a city hospital for Lex, stricken by the meteor radiation that made his hair fall out.  The Kents naturally take Lex to town, and Lionel offers what seems unquestioning gratitude.  Later the Kents appeal for Lionel’s help in arranging Clark’s bogus adoption, but Lionel’s gratitude gives way to avarice when he realizes that he can use Jonathan’s secret to compel Jonathan to betray a friend—all of which results in the Luthors gaining a “foothold” in the community.  Thus at least one of Jonathan’s long-standing reasons for Luthor-hating manifests, though it won’t be the last one.


The reference to mythology appears very briefly at the opening, when Chloe and Pete are discussing the Greek legend of Heracles, and debating the ethical merits of Hera sending serpents against her husband’s bastard child.  Chloe’s moderate sympathy for Hera is clearly meant to resonate with Rachel, who tries to avenge herself on a cheating man by victimizing his son—though here Lex is more in the position of a weakling like Heracles' figurative "brother" Eurystheus, while Clark, who comes to Lex's rescue, is clearly Heracles.


“Ryan” features the return (and last appearance) of the young psychic boy from Season 1 episode "Stray." Since leaving the Kents Ryan began suffering head-traumas, and his aunt unwisely signed over his care to yet another manipulative Luthorcorp company, this one called “Summerholt.”  Clark finds out that Ryan’s being held against his will and breaks Ryan out, thus bringing the wrath of officialdom down on the Kents.  Lex saves them by bringing in his battery of lawyers.  But nothing can save Ryan from a deadly tumor, even after Clark moves hell and high water to recruit an expert physician from Hub City (yet another notable DC locale).  Before he dies Ryan alludes to a “secret” that Martha is keeping from her son and husband.  However, though the nascent Superman learns that even he can’t save everyone, one aspect of his life takes an upward turn.  Lana’s aunt still departs Smallville (and the series), but she allows Lana to remain behind in the care of Chloe and Chloe’s father.  And Clark doesn’t even have to confess his love to make her stay!
Posted by Gene Phillips at 1:46 PM
Email ThisBlogThis!Share to TwitterShare to FacebookShare to Pinterest
Labels: combative adventures, the marvelous