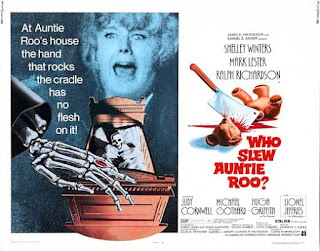 In contrast to this earlier review of a "Grande Dame Guignol" film, AUNTIE ROO does qualify as metaphenomenal in that the titular character is crazy enough to suggest what Tolkien called "arresting strangeness."  That's not to say, however, that director Curtis Harrington and his four credited scripters (one of whom was Hammer writer Jimmy Sangster) manage to get much mileage out of their crazy grand dame.

Shelley Winters plays Mrs. Forrest, a rich lady who appears to be a beneficient citizen, allowing children from the local orphanage to visit her mansion for holiday parties.  In truth, Mrs. Forrest simply hides her crazy well, as she lost a child long ago but has kept its mummified remains in her house. She also makes futile attempts to contact her dead child's spirit via psychics (phony ones in this film) and her cellar is replete with stage-magic devices bequeathed by her late magician husband.  The presence of the magic devices is used for one good "scary" moment for a couple of kids, and for that reason alone the film qualifies for my "illusionism" trope, but in terms of plot the devices have little relevance.

The script's overly simple idea-- that two of the orphan children end up playing "Hansel and Gretel" to an old woman who acts rather "witchy"-- would have made a good half-hour plot, but it's not enough by itself to sustain a full-length film.  In "Hansel and Gretel," irresponsible parents turn the two children out of their house, forcing them to fend for themselves, until they come across the house of a witch and manage to burn her alive before the witch can eat them. In ROO, Mrs. Forrest invites ten orphanage to send her ten well-behaved children to her Christmas party.  One brother and sister, Christopher and Katy, are not chosen but decide to follow and join the party anyway.  Forrest sees in Katy a resemblance to Forrest's dead daughter.  She kidnaps her in such a way that the authorities believe the girl's simply run off, so that her brother Christopher has to rescue her by himself, resulting in the fiery death of "Auntie" in a clear evocation of the folktale.

The most original idea in the script-- one which Harrington and Co. might have done more with-- is that instead of just happening across a witch as the folktale characters do, Christopher and Katy make an almost "heroic" action in that they intrude on the party without the consent of the orphanage-authorities (who are potrayed as a rather grim lot).  This bit of childish chutzhpah results in Forrest mistaking Katy for her own child, so in a sense, the juvenile heroes beard their personal "monster" in her den rather than simply stumbling across her.

Various psychological interpretations of "Hansel and Gretel" take note of the fact that it's usually an evil stepmother who forces the kids' natural father to turn them out, and conclude that the witch who tries to eat the children is symbolically identical with the stepmother.  This might have been a worthwhile line of thought for ROO to pursue, but the characters are generally flat and uninvolving.  Despite their defiance of the orphanage, Christopher and Katy are bland.  Christopher gets a little more characterization in that he's the first to conceive of Forrest as a real witch rather than a dangerous crazy lady, but there's no depth behind his conceit; no intimation that he might, say, resent Forrest as a symbol of a parent who deserted him.

Similarly, Mrs. Forrest-- who certainly gets the lion's share of narrative attention, in that Shelley Winters plays her in an overwrought bravura style-- never emerges as a strong character either.  In essence AUNTIE ROO feels like "How to Make a Standard Grand Dame Horrorshow Without Really Trying."  Forrest's death almost captures an element of pity for her missing from most of the story, but it's undercut by the sense that the climax has been determined by the conceit.  In the best "shaggy dog" versions of famous folktales, the outcome has to seem logical by its own merits, not merely because it sedulously copies what happened in the original story.

Posted by Gene Phillips at 10:01 AM
Email ThisBlogThis!Share to TwitterShare to FacebookShare to Pinterest
Labels: enthralling hypnotism and illusionism (u), perilous psychos (u), the uncanny