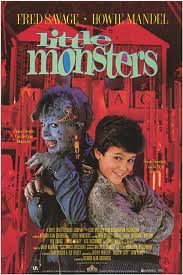 CAMPBELLIAN FUNCTION: *psychological*
Two kids’ films up this time, both of which depend on pretty predictable effects for their appeal.

LITTLE MONSTERS is essentially BEETLEJUICE for elementary-school kids.  The opening scenes of the film do a credible job of building up the everyday conflicts and tensions taking place in an average American family, making it desirable for central character Brian to want to escape to the world of the monsters.  But since Briann’s parents are basically well-meaning but not actually oppressive, the boy’s desire for escape doesn’t have the same resonance as, say, the main kid-character of HOME ALONE, who is reacting to a sense of being marginalized by his family members.

In addition to a slack script, MONSTERS is built around the questionable charms of comedian Howie Mandel, playing Maurice, the friendly blue-skinned monster who lures Brian into his world.  Mandel isn’t just “Michael Keaton Lite” in this film; more like “Michael Keaton with no life.”  Without a truly funny monster, LITTLE MONSTERS loses his raison d’etre.

A kid would probably have enjoyed Brian's sojourn into the irresponsible world of the monsters much more than I did.  A conflict finally does appear: "Boy," the hostile king of the monster-world,  kidnaps Brian's little brother and threatens to permanently transform both kids into monsters.  But it's too little, too late. 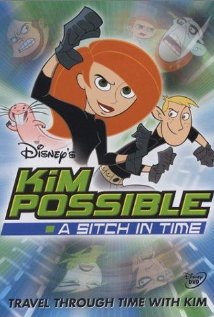 A SITCH IN TIME (the title provides the best pun in the story) was one of two telemovies built from the Disney Channel’s KIM POSSIBLE franchise.  The titular character, though constructed as a superspy operative of some sort, usually functions more like an independent superhero.  This extends to her possessing a regular “rogues’ gallery” a la Batman, though Possible's villains tend to be incompetents who suggest little real danger.  In SITCH three of those rather monotonous foes—Monkey Fist, Doctor Drakken, and Duff Killagan—plot to take over the world with the use of a time-altering monkey-idol.  An additional B-plot concerns how Kim loses her goofy sidekick Ron Stoppable when his father gets a job in Sweden, forcing Ron to move out of the neighborhood—which later proves to be a plot by the villains to break up the team.

Disney’s television franchises are perfect for most juvenile audiences: they’re repetitive but flavored with enough wit to keep them from being completely tedious.  However, there are never any particular highs or lows with Disney teleseries, and SITCH is no exception.  The telefilm is designed so that it could be cut apart and shown as separate episodes during the broadcast of the regular half-hour series, which doesn’t do a lot for narrative unity.

The film, like the show, makes copious use of physical and verbal comedy, but it doesn’t completely reduce the main character to a joke.  Therefore when assigning it a Fryean mythos I designate it as “adventure,” albeit very tongue-in-cheek adventure after the fashion of the 1960s BATMAN series.

ADDENDUM: Changed my mind on the classification.

Posted by Gene Phillips at 2:18 PM
Email ThisBlogThis!Share to TwitterShare to FacebookShare to Pinterest
Labels: combative comedies, the marvelous