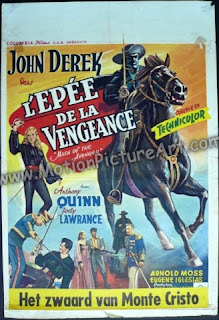 MASK OF THE AVENGER is one of many B-movie swashbucklers that will find no listings in most fantasy-film concordances, with the exception of R.G. Young’s ENCYCLOPEDIA OF FANTASTIC FILM—though as I’ve remarked elsewhere, Young also includes many films, whether swashbucklers or other genres, that fall into the purely naturalistic phenomenality. Just as I distinguished THE KID FROMBROKEN GUN from naturalistic westerns purely because the hero wore an iconic mask, the same pertains to this B-film.


MASK is one of many minor 1950s films helmed by director Phil Karlson.  Karlson is celebrated in some circles for his hard-edged crime films, but nothing in MASK is likely to spark anyone’s enthusiasm for his swashbucklers.  The direction, like the plot, is never more than adequate.


The title’s surprising in that it doesn’t seek to cash in, as did many other B-films, on Alexander Dumas’ book THE COUNT OF MONTE CRISTO and its equally famous film-adaptations.  Central hero Renato only uses the original Count-- who's supposed to have some vague connection with the city in which the action takes place-- as a rallying-point for the people, after Renato's father dies as a result of a plot by evil usurper Governor Larocca (Anthony Quinn). Renato infiltrates the tyrant’s mansion with a pretense of having broken his leg, as well as being entirely clueless about his enemy.  While pretending to recover in his foe’s own house, Renato then dons dark garments and a full face-mask—one that strongly resembles that of Zorro in his initial pulp-appearances—and sallies forth to whittle down the tyrant’s forces as “the Ghost of Monte Cristo” (a sobriquet which proves something of a mouthful every time someone has to utter it).  Though there's nothing particularly macabre about the Ghost's outfit, one commoner describes the mask as concealing a ghastly "death's head," which might be taken as a commentary of the suggestive power of a costume.


The most interesting aspect of MASK is its proto-feminist touches: Renato's girlfriend Maria is like him is an expert with the sword.  Unlike many helpmates in swashbucklers, Maria is so enrhusiastic for the cause that she impersonates the Ghost of Monte Cristo on one occasion.  Of course, the climax must come down to a duel between Renato and Quinn, but even here, Maria has a nice moment taking over the duel for Renato when he’s briefly out of action.


One other minor treat consists of seeing Arnold Moss, known to SF-fandom for portentous roles, playing a nasty little quisling.


I wish I could find even a minor treat in the Russian-filmed adventure-opus WOLFHOUND, named for its titular barbarian hero.  Unfortunately, the best thing about the film is the shameless hype on the American DVD: claiming that WOLFHOUND amounts to “Conan meets Lord of the Rings!”


WOLFHOUND isn’t the worst sword-and-sorcery fantasy I’ve ever seen, and if one was in the right mood it might be enjoyable just for its clumsy badness.  It’s photographed competently enough, though the action-sequences are phlegmatic, and the actor playing Wolfhound has zero charisma.


Like Conan, Wolfhound was brought up as a slave, and therefore seeks vengeance on those responsible for his enslavement, as well as the killing of his parents and tribe.  Like Conan, Wolfhound inevitably picks up a motley crew of followers and gets mixed up with various sorceries, none of which are the least bit comparable to LORD OF THE RINGS.


It’s just another sword-and-sorcery flick, despite its exotic origins.  I’d rather watch even the worst of the DEATHSTALKER series than to see it again.


Posted by Gene Phillips at 1:54 PM
Email ThisBlogThis!Share to TwitterShare to FacebookShare to Pinterest
Labels: combative adventures, outre outfits (u), the marvelous, the uncanny