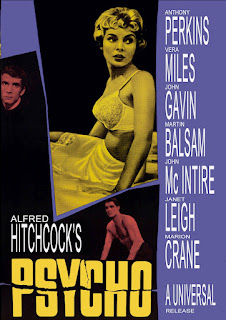 
Norman Bates: "You know what I think? I think that we're all in our private traps, clamped in them, and none of us can ever get out. We scratch and we claw, but only at the air, only at each other, and for all of it, we never budge an inch."

Hitchcock's PSYCHO may be the most intensely analyzed American film of all time.  Reams of academic books and essays have been published taking apart every shot, every learned allusion in the Joseph Stefano script.  The plot's so well known that I'm not even going to bother with a summary thereof.

There is one thing, given my affinity to a Fryean literary scheme, that I can point out that hasn't been analyzed to death: the nature of PSYCHO as an irony.  Norman's lines about enduring within "private traps" perfectly embodies how the mythic form of the irony works: by putting across a vision of near-total futility and disempowerment.  Oddly, though Norman has become one of the first cinematic icons of the "psycho-killer," in the original film he's something of an anti-icon, the "little man who wasn't there."  The psychiatrist explaining Norman at picture's end observes that Norman hasn't really existed for a long time, having been subsumed in the identity of his dead mother.  In this Norman bears strong comparison with Kafka's impotent protagonists, such as Gregor Samsa, who by losing his humanity and perishing seems to revivify his family.

Marion Crane is if anything more pathetic: like many Hitchcock characters she's ceaselessly dogged by the downside of the American dream: the inability to get ahead financially.  As I'm sure others have observed, Marion and Norman are uncomfortable mirror-images of one another: even though one is beautiful and the other pleasant-looking but twitchy, they're both trapped by circumstances of birth or capricious fate.  Though Hitchcock directed many films that give his protagonists at least an even chance of achieving some happiness or contentment-- which is to say, "dramas"-- the black humor of PSYCHO places it, along with a few other Hitchcock works like THE WRONG MAN, in the ranks of the director's bleakest, most uncompromising projects.

Now, is it possible to make a bleak irony in terms of form, and yet not succeed in anything but an empty exercise? As it happens this need not be a mere intellectual question, thanks to the 1998 remake of PSYCHO by director Gus Van Sant.

Before hacking away at the remake-- also much-travelled ground in cinema-studies-- I should note that I'm not unilaterally opposed to remakes.  I don't necessarily consider them "appropriations" in that tired old post- Marxist conception, any more than I consider the 9,999,999th performance of the play HAMLET to be an appropriation of HAMLET-- not even if the theater director switches the setting to the Old West and makes Horatio gay.

Still, I will join the negative chorus by asserting that if one is going to try to remake an avowed classic, one ought to bring some fresh ideas to the mix.

It's often been reported that the 1998 PSYCHO is a "shot-for-shot" remake of the Hitchcock film.  In a publicity interview included on Universal's PSYCHO DVD, Van Sant is entirely unapologetic about stating this to be his intention.   But in point of fact, Van Sant does change up assorted shots from time to time, which to my mind is preferable to total emulation.  However, most of Van Sant's additions have a dull, noodling quality to them, as if the director were literally thinking, "What can I put in here to make it a little different from Hitchcock?  I know, when Marion's sister finds the body of Norman's mother, I'll have a spider crawl out of the corpse's nose."  But even that's tolerable next to the silly psychedelia that intrudes on the scene of Marion's murder, during which we apparently go into her head and see a deer-- because she's like a deer trapped in a car's headlights, I guess.  Whereas Hitchcock was genuinely fascinated with Freudian psychology, and could transform the source material into his own rich meditation on the subject, Van Sant has no concept of anything beyond tedious "gotcha" effects. (And they're not even good "gotchas!")

One more interesting way to approach the project might have been to still keep the best-known iconic moments but bring in more elements from the Robert Bloch book.  There are elements in the book that probably still wouldn't work in a film, such as Bloch's cumbersome explanation as to why Norman thinks his dead mother's still alive after he poisoned her (in two words: voodoo resurrection).  But there are some elements that might have given Van Sant a slightly different, but still resonant, take on Norman Bates.  For instance, in Bloch's novel Norman is that unacknowledged ancestor of the film-nerd and the comics-nerd: the "book-nerd."  Bloch made Norman a book-nerd so that the idea of his being well-read in occult studies would justify the supposed voodoo resurrection, but an ambitious director might have extended this characterization in promising new directions.

Still, it's hard to say if such a director could have pulled off much of anything with the leading actors Van Sant had to work with.

To be sure, despite Hitchcock's legendary control of his medium, he did make films with bad or listless central performances.  PSYCHO, however, is pretty much pitch-perfect-- which makes it even harder for a remake's actors to excel.

As Marion Anne Heche gives a flat, distracted-seeming performance, but at least she doesn't screw up the Marion icon, such as it is.  However, Vince Vaughan gives us a Norman who's lost his twitch.  Not for a moment did I believe Vaughan's Norman had lived a life of quiet desperation in thrall to his clingy mother: this Norman was merely spacey and came off less like a mama's boy than one of the hustlers of Van Sant's MY OWN PRIVATE IDAHO.  The only actors who prove somewhat compelling are Julianne Moore as Marion's sister and William H. Macy as the detective Arbogast, but they're pretty much lost in the film's dominant posturing-style of acting (which affects Viggo Mortensen's Sam as well).

On a side-note, I was amused that whereas Hitchcock was often analyzed in terms of his directorial voyeurism toward his female characters, in PSYCHO and other Van Sant films this director seems to take the same voyeuristic approach to the male characters.

Touching once more on the original film's theme of irony, this theme stands or falls on the character of Norman.  A Norman who doesn't truly seem "trapped" doesn't communicate his existential horror; he's merely an odd duck who happens to go off his trolley and kill people.  And despite the re-use of most of Joseph Stefano's excellent script, in the end even a good speech sounds false coming from a posturing fool.

Posted by Gene Phillips at 3:17 PM
Email ThisBlogThis!Share to TwitterShare to FacebookShare to Pinterest
Labels: perilous psychos (u), the uncanny