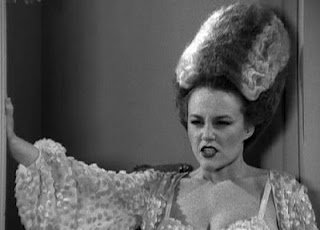 One assumes that Sigmund Freud might've liked both of these comic takes on classic monsters, in that, in accordance with Freudian theory, the repressions of the Oedipus complex breeds monsters.

Of the two comedies here, Mel Brooks' YOUNG FRANKENSTEIN is indisputably the better work, but it does "stand on the shoulders of giants," picking some of the best elements from the Mary Shelley novel and the first three Universal film adapations thereof.

In the novel, medical student Frankenstein constructs a reanimated patchwork-corpse for no better reason than because his father tells him that he can't do it.  Not only does the resulting monster slaughter nearly everyone in Frankenstein's circle of friends and relatives-- arguably making the monster the concretization of Frankenstein's own hostilties-- the creature also usurps his creator's honeymoon with his fiancee Elizabeth, though Mary Shelley was too decorous to suggest anything more than the monster simply killed her.  Creators at Universal Studios would have quite a bit of fun with this incredible Oedipal horror, particularly in Whale's BRIDE OF FRANKENSTEIN, where an early script suggested that the Bride would borrow some body-parts from Frankenstein's fiancee.

YOUNG FRANKENSTEIN is full of many amusing verbal and visual gags, but director/co-writer Brooks forms the germ of his story around a similar Oedipal encounter.  This time, the new Frankenstein, grandson of the original monster-maker, is shown as a twitchy fellow traumatized by growing up under the shadow of his grandfather's bad reputation.  His life as a neurosurgeon is interrupted when he must claim the legacy of his relative's old castle, which inevitably means claiming the Frankenstein legacy of monster-making as well.  He also gets cozy with the castle-maid Inga (Teri Garr), but it's not until over half an hour into the film that viewers see his fiancee Elizabeth (played by Madeleine Khan and given the same name as the fiancee in the Shelley novel).  Whereas Inga is a pliable young thing (and fifteen years younger than star Gene Wilder), Elizabeth is sexually cold to Frankenstein (denying him the chance to touch her because of her makeup) yet sexually manipulative as well.

Thus, where one might interpret that the anxiety-ridden Frankenstein of the novel made a surrogate to take his place in a honeymoon, here the wimpy monster-maker makes a hulking creature who doesn't take "no" for an answer.  And because Elizabeth makes herself such repulsive with her manipulations, her violation of the monster becomes comic, though it helps that she really enjoys it.

Small wonder, then, that Brooks' conclusion-- stronger than most of his movie-endings, and thus perhaps given some help from scripter Gene Wilder-- revolves around a last comedic confusion of creator and creature.
ONCE BITTEN stands on no giant shoulders, but it's certainly a better-than-average teen sex comedy.  As is often the case in such efforts, protagonist Mark (Jim Carrey) is a young man who can't get any from the object of his lust: in this case a young schoolmate named Robin who wants their first time to be "special" and so keeps finding reasons to put off sex.

If YOUNG FRANKENSTEIN resolves an Oedipal conflict for its hero-- giving him a way to break down the resistance of an unobtainable female-- ONCE BITTEN is perhaps in accord with Freud's "female Oedipal complex," in which he assumed that young women would find themselves in sexual competition with older females.  Thus it would seem that though the film is manifestly built around Jim Carrey-- who made it during the period he styles his "15-year overnight success"-- the central conflict is actually Robin's, since she has to make the decision to de-virginize Mark and save him from that Evil Older Woman.  I give nothing important away by stating that she wins and the Countess loses, devolving to decrepitude in seconds (though her faithful aide Sebastian suggests that there are still other virgins out there, so she may still make a comeback).

BITTEN isn't the equal of the Brooks film, but it has a lot of witty verbal byplay and the expected Carrey slapstick.  Amusingly-- though I don't know if it was meant as a joke-- during one scene the Countess is seen riding an exercise bike while she talks to her subordinates.  Her immortality-spell must not be that special, if she still has to exercise to keep that immortal body fit and toned.
Posted by Gene Phillips at 3:18 PM
Email ThisBlogThis!Share to TwitterShare to FacebookShare to Pinterest
Labels: the marvelous