THE GHOST IN THE INVISIBLE BIKINI (1966) 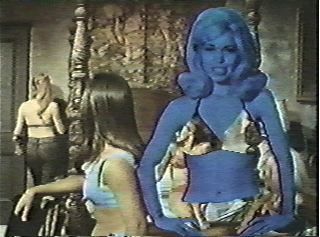 
In this review I found myself less than charmed by the lame wackiness of Don Weis’ PAJAMA PARTY.  However, though GHOST IN THE INVISIBLE BIKINI uses many of the same support-characters as PAJAMA, Weis does a better job of keeping things lively.


Usually when low-budget films employ the idea of a framing-concept—often to inject brief scenes of a “big-name” star whose scenes are shot separately—the frame-device seems artificial and distracting.  This time, the conceit actually adds extra spice (albeit in a juvenile mode) to the entire proceedings.  The film opens in a mausoleum, where a coffin's lid opens to reveal elderly Hiram Stokely (Boris Karloff)-- or, more precisely, his ghost, since Hiram's kicked the bucket. Hiram’s greeted by “the ghost in the invisible bikini” herself, his former lover Cecily (Susan Hart).  Because Cecily died when she was young and hot, she’s still young and hot as a ghost, but Hiram’s condemned to spend eternity as a crotchety old man because he died that way.  However, according to the ghost-girl Hiram can become a virile young spriit and enjoy heavenly nookie with Cecily if he does a good deed for those in the living world.


Hiram isn’t slow to decide what the good deed will be.  Hiram knows that his riches will soon be parceled out to his heirs, and he worries that one of those heirs—evil lawyer Reginald Ripper (Basil Rathbone)—may resort to foul means to get rid of the other inheritors, so as to get hold of the whole fortune.  One may wonder for a moment why Hiram left Ripper any sort of bequest if he feared such an outcome.  Maybe it’s a rule decreed by the “Doddering Old Rich Guys” Handbook.


Hiram never leaves his room, but he sends the ghost-girl off to his estate, where Ripper will read the will to the inheritors.  The recipients include Hiram's cousin Myrtle, her son Bobby, and two non-relations: Chuck (Tommy Kirk) and Lily (Deborah Walley), who are respectively descended from different parties whom Hiram wronged in life.  Chuck and Lily are destined to be the “cute couple” of the story, meaning they don’t have much to do except to be cute.  Bobby brings along a retinue of party boys and girls who join the proceedings from time to time, though the only one who has much to do with the plot is Vicky (Nancy Sinatra), who’s in love with Bobby even though he doesn’t know she’s alive.  She's not the only one to get a song, but she's the only one who sings particularly well.


Meanwhile Ripper, who apparently didn’t see PAJAMA PARTY, enlists the ghastly trio from that film to do Ripper’s dirty work of scrubbing the “clean teens” out of existence: bossman J. Sinister Hulk, renegade Indian Chief Chicken Feather, and token girl Yolanda.  After the threesome bumble their first few assassination efforts, Ripper brings in his own daughter Sinistra—no relation to the aforementioned J. Sinister, though after two characters with such similar names, one wonders if the scripter had some issues with left-handed people.  Sinistra is no more efficient than the trio, for she can only work her seductive wiles on Bobby by doffing her glasses, which makes her half-blind in this pre-contacts era.


For good measure Erich Von Zipper and his Rat Pack show up to add to the confusion.  They barely interact with the main characters, though Von Zipper has a cute line where he claims that Ripper is “the guy who looks like Sherlock Holmes.”  Oh, and the ghastly trio brings along an ape, as well as getting some use out of a costume from 1965’s EYE CREATURES.


In 1966 viewers probably didn’t get any bang out of the ghost-girl’s “invisible bikini”—which also makes the areas it covers invisible as well.  But maybe the climax made up for it.  Buster Keaton doesn’t play Chief Chicken Feather this time round, but the climactic donnybrook works in a reference to silent film-serials when the good guys fight Ripper and his goons while Lily is being threatened by the old “girl-tied-to-a-log-and-headed-into-a-sawmill” gag.  The film concludes with a joke at the expense of Hiram Stokely’s desire to be “young again.”


Profound, it’s not.  But unlike its predecessor, its charms aren’t as invisible as Cecily's bikini.

Posted by Gene Phillips at 2:30 PM
Email ThisBlogThis!Share to TwitterShare to FacebookShare to Pinterest
Labels: the marvelous