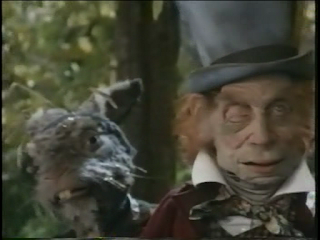 
These films are built around the trope I term “delirious dreams and fallacious figments.”  This trope aligns with the uncanny when the diegesis includes either (1) literal dreams that lend the narrative the metaphenomenal quality of “strangeness,” or (2) breaks in the rational continuity of the story that aren’t explained as dreams but create the same emotive effect.


Dennis Potter’s DREAMCHILD is an excellent example of the first type.  In 1932, a New York university, wishing to celebrate the centenary of the birth of ALICE IN WONDERLAND author Lewis Carroll, sends an appeal for Mrs. Alice Hargreaves (Coral Browne) to come to the States and address the celebration.  Alice, now in her eighties, was the little girl on whom Carroll based the Alice character.  Though the old woman is bemused by her brush with literary celebrity, she consents and makes her first journey to America, thus setting up a sociological encounter between the slow-paced, proper world of her Victorian upbringing and the raucous world of American merchandising and industry.


Accompanying Alice is her young traveling companion Lucy, who clearly finds the New World more attractive than the Old.  Lucy’s particularly attracted to one of the young male reporters who tries to interview the often befuddled granddame.  However, Alice has worse problems than her assistant’s defection.  Alice begins to experience involved flashbacks to her childhood, when she knew the Reverend Dodgson (Ian Holm), who assumed the Carroll pen-name to write the ALICE books.


In keeping with certain literary theories about Dodgson, the Reverend is in a sense a pedophile—though not an undiscriminating one, in that Potter’s version of Dodgson is only in love with the eleven-year-old Alice, not with little girls in general.  At no time does Dodgson make an improper advance toward Alice, connoting that he’s aware of the immorality of his desire but is helpless to prevent it. Despite her childishness young Alice becomes aware of the reverend’s feelings, and seems simultaneously flattered and annoyed.  Alice’s mother is also suspicious, particularly of the reverend’s tendency to take photographs of Alice in fancy-dress outfits.


Old Alice’s flashbacks include dreams—some of which are waking—in which she interacts with the famous characters of Wonderland.  Sometimes she appears as a child, sometimes as the old woman she is—but the inhabitants of Wonderland are not the winsome curiosities seen in most adaptations of the novels.  The Mock Turtle, the Mad Hatter, the March Hare, and the Caterpillar are depicted in line with the original novels: as capricious, indifferent, and often nasty personages that bely the “wondrous” aspect of Wonderland—and perhaps connote the darkness in their creator’s soul as well.  Jim Henson’s team, best known for the cherubic Muppets, proves no less skilled in portraying Carroll’s grotesqueries.


The romance of Lucy and the reporter provides a running commentary on the fading of the elegant Victorian world—particularly when Lucy believes, somewhat correctly, that the reporter has made her acquaintance simply to exploit Alice’s celebrity.  But the core of DREAMCHILD is Alice making her peace with the truth of her nearly forgotten relationship with Dodgson.  Though the WONDERLAND books themselves qualify for the Fryean mythos of “the irony,” in that they present a world where sense and nonsense are inextricably commingled, Potter’s work flirts with the black humor of the irony but essentially partakes of the mythos of drama, in that though Dodgson and his desires are long dead, Alice at last acknowledges the human nature of the man whose forbidden love birthed a masterpiece.


Bob Rafelson made HEAD during the twilight years of the MONKEES teleseries, a light comedy in which the titular singing-group had variously farcicial adventures.  Some episodes of the series used outright marvelous elements like vampires or aliens, but most of the time THE MONKEES used the “naturalistic” version of the “fallacious figments” trope, in which characters would violate time and space for nothing more than the space of a quick, vaudeville-like joke.


The title HEAD connotes that the film is essentially a “head trip,” the term used by the youth-oriented drug culture for a drug-induced phantasia.  HEAD extends the “fallacious figments” trope used on the teleseries into uncanny territory by positing that the whole film seems to be a “head trip,” one taking place more or less within the heads of all four Monkees—Mickey, Mike, Peter and Davy.  Rather than being musicians having funny adventures as in the series, in the movie they’re apparently playing “themselves.” They  seem to be actors continually being put through their paces as they act various parts in genre movies—westerns, spy films, etc.  But every time they leave one set they end up in another, and another, and another, while being stalked by assorted malicious entities, such as a rampaging giant played by Victor Mature. 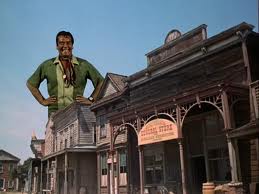 Despite the film's somewhat Marxist complaints about the Monkess being a "manufactured image," that knowledge does not allow the discontented actors to break free from the genres that constrain them—which constraint is essentially the condition of the Freyan irony.  Not even a few racy moments—including a wry allusion to fellatio—can break the Monkees out of their cage, and metaphysical advice from a swami who looks like the Maharishi Mahesh Yogi leads them nowhere.  The Monkees thus end the film the same way they began it.  Given that in real life the performers were never able to find lasting fame beyond the associations of the Monkees’ reputation, HEAD seems sadly accurate in predicting the destinies of the foursome.

Posted by Gene Phillips at 2:01 PM
Email ThisBlogThis!Share to TwitterShare to FacebookShare to Pinterest
Labels: delirious dreams and fallacious figments (u), the uncanny