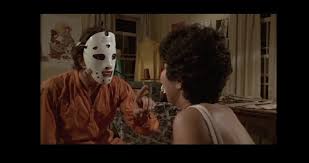 
Director Bob Kelljan’s ACT OF VENGEANCE contributes a minor contribution to the annals of “female action-cinema,” pursuing a predictable path in showing a group of women taking arms against the male of the species. Arguably, because the main villain is a serial rapist, his presence might be deemed a borderline example of metaphenomenal horror. But despite the rapist’s choice of using a hockey mask about six years before Jason Voorhees, the movie is entirely naturalistic in nature.

Linda (Jo Ann Harris) is an innocent woman to suffer rape by a masked man who demands that she sing “Jingle Bells” to him before he takes her. This peculiarity might suggest a demented mind, and thus qualify the malefactor as a “perilous psycho.” However, there’s no real suggestion that the rapist, who in regular life uses the somewhat appropriate name “Jack” (Peter Brown), is insane, and his use of the Christmas song seems to have no purpose to further break down any resistance from his terrified victims. After being attacked, Linda immediately reports her assault to the police. Linda finds the cops less than sympathetic, as they’re largely concerned with protecting themselves from frivolous accusations. In fact, in a development that could only happen in a movie, the cops even set Linda and other victims up with a phony police-lineup, purely to prove to the women how difficult the cops’ job is.

The police station serves one good purpose: five women who have all been attacked by Masked Jack meet one another and decide to form a “rape squad.” To that end the women take a handful of karate classes. As a warmup for going after Jack, they take on a handsy seducer and a pimp abusing his hooker on the city-street. In both cases, though, most of  the women confine themselves to wrecking the bad guy’s property, though in the latter case the ladies bring along their female karate instructor (Lada Edmund Jr.) to kick hell out of the pimp. In his secret identity, though, Jack gets wind of their plans and sets up the Rape Squad for a fall.

There’s nothing intrinsically wrong with a film following a set formula, but VENGEANCE does so in such a way as the undercut the visceral appeal of its premise. Despite setting up the audience to expect that all five women will be empowered, most of them are not seen engaging in brawls, which suggests to me a directoral attempt to avoid the headache of involved fight-choreography, Aside from the scene with the pimp, where the karate instructor does all the heavy lifting, most of the other actresses give no evidence of having obtained any self-defense skills, and none except the Linda character are given any decent character-scenes. Linda is also given the honor of defeating Jack in a competent one-on-one battle, while the rest of the women are either killed or ignominiously trapped.

Forget coming up to the empowerment-level of FASTER PUSSYCAT KILL KILL—this merely watchable opus isn’t even on the level of THE BLACK ALLEYCATS.
Posted by Gene Phillips at 5:10 PM
Email ThisBlogThis!Share to TwitterShare to FacebookShare to Pinterest
Labels: perilous psychos (u), the naturalistic