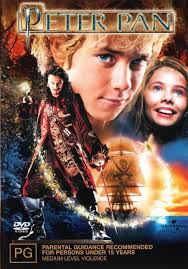 
As a kid I was only mildly interested in the stories of Peter Pan. I dutifully watched the TV special, with Mary Martin following the trend of having Pan played by smallish women. I found myself a little bored with the Disney animated movie, because that version of Captain Hook was too goofy and effete to pose any real threat. I didn’t read J.M. Barrie’s classic novel until after childhood had long flown, and the novel gave me a greater appreciation for some of the more accomplished adaptations of later years, and even offbeat takes like Spielberg’s HOOK.

In contrast to works that require considerable fidelity in translation—say, the Harry Potter series—Peter Pan films are probably at their best when the creators treat Barrie’s text as a grab-bag of evocative motifs, which can be rearranged in many pleasing ways without doing violence to the basic story. This U.S.-Australian adaptation, directed and co-written by P. J. Hogan, exemplifies such an approach, and at present it’s the best “Peter Pan movie” I’ve seen, not counting a prequel-film like NEVERLAND.

Though Barrie’s book is rather ambivalent about Peter’s age, the dominant image has become that of a puckish pre-adolescent, if only to justify the scenes of burgeoning puppy love between Peter and Wendy. Jeremy Sumpter hits all the right notes, showing Peter as heedlessly energetic, mercurial, forgetful, and both envious and leery of the bonds of familial love. Rachel Hurd-Wood’s Wendy has been crafted to be more of a tomboy, first seen telling wild stories of pirate adventure, as opposed to being the demure figure from Barrie’s book. Nevertheless, the script doesn’t overplay Wendy’s swashbuckling fantasies, and her interactions with Peter are marked more by feminine persuasion than by any contemporaneous notions of empowerment. Even more thankfully, Jason Isaac’s Captain Hook is a genuine threat to Peter and the lost boys, and manages to project sinister charm without falling into the effeteness trap. The actors playing the Lost Boys and the various members of the Darling family all fill their roles admirably, and the only false note comes from Ludivine Sagnier’s Tinkerbelle, whose jealousy of Wendy is too often used for “baggy-pants” comedy.

Both the mermaids and the Kaw Indians put in appearances, but the emphasis here is the age-old quarrel between youth and age. Thus Wendy finds herself somewhat caught between her desire to mold ageless Peter into something of a ‘husband” and her realization that even a charming pirate like Hook has been corrupted by the adult priorities of ruthless acquisition. To boost the spectacle of the book’s climax, the evil pirate captain gains the power to fly via fairy-dust, and he and Peter lock horns in both physical and psychological combat. This reworking allows the filmmakers to dispense with the way the book got rid of Hook’s men—implicitly they’re all knifed to death by the Lost Boys—and instead, magical fairy-power simply blasts them off their own ship, after which they’re never seen or spoken of again. Hook does still meet his crocodilian doom, but Hogan’s version is in some ways more interesting than Barrie’s, in that the former reinforces that “age vs. youth” conflict.


I don’t remember whether or not Barrie had the Lost Boys return to Earth, but Hogan does let this scene go on a little too long. Still, the ending, with Wendy bidding farewell to the Boy Who Never Grew Up, does credit to the poignancy of Barrie’s tribute to the last years of childhood.
Posted by Gene Phillips at 2:43 PM
Email ThisBlogThis!Share to TwitterShare to FacebookShare to Pinterest
Labels: combative comedies, the marvelous