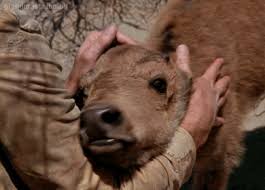 “Cry of the Night Beast” scores as one of the most artful uses of the Shaolin priest’s ethic of empathy. This time, the hero’s flashbacks to the days of Young Caine are integrally linked to the experiences of Mature Caine, for it’s in his childhood that the former experiences strange dreams of meeting a very un-Chinese animal, and seeing a “red door.” Because of that dream, Caine interferes when Branch, an aging bounty hunter, attempts to shoot a buffalo calf. Branch is irate with Caine but Caine is convinced that the calf is the creature he saw in his dream, and, further, that the calf’s fate has an importance beyond the animal’s own survival. Caine, though currently on the run from bounty hunters, takes up residence in a nearby town and tries to nurse the unweaned calf. He gets some help from a local named Grace (Stephanie Powers), formerly a prostitute and currently the lover of Branch. The hunter scorns Caine’s endeavor, but swears that he’ll cut the animal down if he sees it in the wild, for Branch defines himself as a hunter first and foremost. To his credit, he refuses to betray Caine to the trackers, since he considers hunting men to be a low profession, but he doesn’t realize how his own profession has laid waste to the buffalo herds that once roamed freely. Naturally, the activities of white slayers are justly contrasted to the greater frugality of Indian buffalo-hunters, though happily the script doesn’t make Branch a stock villain, since his ethic of hunting remains rooted in a heritage as old as humankind. But though there’s no explicit mention of karma, something like that concept proves to be the key to Young Caine’s dream, for Grace carries Branch’s child, and if he kills the calf, his own offspring will perish as well. In addition to teaching an old hunter a new way of life, Caine gets the chance to clobber a bunch of no-good bounty hunters. 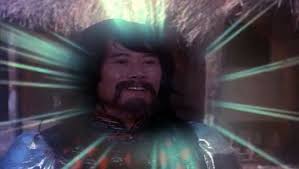 “The Devil’s Champion,” the first episode to take place wholly during Caine’s Shaolin days, is a tolerable but unambitious tale of demon-possession. A seemingly invincible fighter named Yi Lien (Soon Teck-Oh) shows up at the temple-gates, challenging Master Kan to battle. Since Kan does not know the man, and since Caine has seen visions of a weird laughing monk (Richard Loo) in the presence of Yi Lien, the priests theorize that the younger man has been possessed by some diabolical influence. This theory receives confirmation from Yi Lien’s sister, who claims that her brother is normally a gentle man. She’s also aware of the location of the unnamed evil monk, and while one of the Shaolin students fights Yi Lien, the sister leads Caine to a confrontation with the villain—more of a sorcerer than the “devil” of the title. Though not unpleasant to watch, “Champion” is definitely one of the least philosophical episodes of the entire series, though of course the writers manage to work in a fair number of psuedo-Taoist profundities. 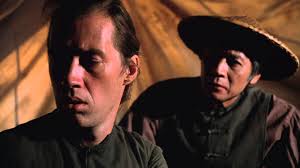 “The Garments of Rage” opens with what appears to be Caine having a premonitory dream, though later indications are that the priest may have received a sending from another former Shaolin. The dream features Caine running along a railroad track and almost being run over by a train—which does not bode well for the hero’s next job, laying track at a nearby construction site. Most of the laborers are Chinese, all working for little pay and for no amenities, not even a camp doctor. The main person in authority is not a straw-boss in the ordinary sense, but a troubleshooter sent to investigate acts of sabotage against the project.

Caine is, to say the least, not pleased when a Chinese youth is injured by a dynamite explosion—nor by learning that the mystery saboteur is one of his old Shaolin teachers, Master Lee. Lee’s family was condemned by the fiat of the Emperor, and only luck enabled Lee and his nephew to both survive the attack and to flee to America some time before Caine did. But Lee and the nephew ended up joining the work-crew. A flashback depicts the nephew being run down by a real train as Caine almost was in his dream (and neither scene shows any reason why the victims couldn’t just jump off the track.) Lee devotes himself to destroying the railroad project, and while Caine won’t betray his old preceptor to the authorities, he does fight Lee to make him see reason. This time the revolutionary gives up his fruitless quest without being apprehended by the law, and the overall verdict is that even Shaolin skills don’t immunize their possessor from the assaults of either imperial tyranny or rampant capitalism. The garments of the title, by the way, belonged to Lee’s late nephew, and he gives them to Caine, who continues to wear them intermittently through the remainder of the season.

Posted by Gene Phillips at 3:23 PM
Email ThisBlogThis!Share to TwitterShare to FacebookShare to Pinterest
Labels: combative adventures, the marvelous