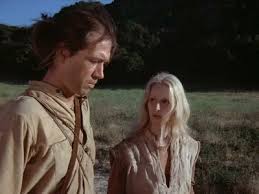 “This Valley of Terror” continues Season 3’s emphasis on elements of the marvelous phenomenality. Whereas Season 1’s “The Brujo” was ambivalent about the actual existence of the supernatural, Caine’s encounter with a madwoman named Gwyneth (Sondra Locke) leaves no doubt as to the veracity of psychic powers. The madwoman has just escaped an asylum when Caine encounters her in the wilderness, and he’s instantly convinced that the visions she sees have some great import. Initially, Caine tries to return Gwyneth to her family, but her aunt and uncle don’t really know the young woman, having only lived with her briefly. As a child Gwyneth was one of two survivors of an Indian attack, and though Gwyneth and her sister grew to womanhood in the tribe, only Gwyneth had special status, since the Indians believed in her visions. The sister passed away, and at some point Gwyneth was ransomed back to her relations—but they looked upon her gifts as manifestations of witchcraft. Indeed, while Gwyneth is at the farm of her white relations, she foresees a fatal accident, and finds herself accused of being a sorceress. Caine guides Gwyneth back to the grounds of her adoptive red family, and by so doing, helps her prevent the slaughter of another homesteader family like her own. Once Caine has aided Gwyneth in achieving her destiny, he asks for her help in returning to his long-deferred quest for his half-brother Danny. She assures him that Danny is at least still among the living. 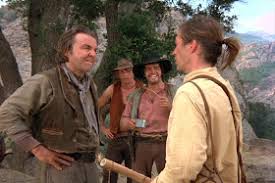 In “The Predators” Caine seeks to achieve a measure of justice for himself. Prior to the story proper, Caine is falsely accused of a new murder, and he goes seeking a witness to clear his name, at least of extraneous charges. He knows that a man named Rafe witnessed the true killer, but Rafe (Anthony Zerbe) is the head of a gang of ruthless scalphunters. Caine is more than equal to the task of separating Rafe from his gang in order to drag him to town. However, it’s almost more than a Shaolin priest can cope with, when he also has to nurse-maid Heyoka, a wounded Apache youth, one who would like very much to kill a hunter of scalps. Further, the other scalphunters give chase, among them an Indian of another tribe who’s killed as many Apaches as the whites, and who’s hot to kill Caine after Caine regards the tribesman as a sort of “race-traitor.” For Caine’s sake Heyoka agrees to a temporary cessation of hostilities, but Rafe professes that he has no honor and will betray the other two at the first chance. Caine manages to give both the reprobate and the would-be avenger a lesson in brotherhood. This time Caine’s temple-flashbacks deal with a priest named Tehsoong, who attempts to use the disciplines of the Shaolin to bring down the hierarchy of the Chinese rulers, an act of rebellion that’s interpreted as being mere self-aggrandizement. 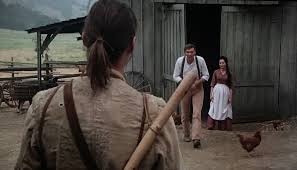 “My Brother, My Executioner” returns Caine to his quest for literal brotherhood. Since he didn’t get any specifics from Gwyneth, Caine consults an old Chinese oracle, and she gives him, like many an oracle before her, an ambivalent prophecy. Caine seeks out a certain farm run by a man calling himself Danny Caine (James Wainwright). At the same time, Danny’s being stalked by a pair of gunfighters who claim he’s someone else, whom they want to outdraw for fame and glory. There’s no big surprise about the farmer’s true identity, but the tale does culminate in a rather subtle use of Caine’s skills to defuse the threat—though, in retrospect, one may argue that the threat remains “in play.”
Posted by Gene Phillips at 3:13 PM
Email ThisBlogThis!Share to TwitterShare to FacebookShare to Pinterest
Labels: combative adventures, the marvelous, the naturalistic