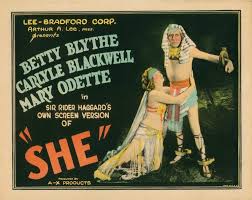 This silent film stands as not only the first feature-length version of H. Rider Haggard’s 1886 novel SHE, but also the only one to which Haggard himself contributed, writing the descriptive intertitles—though the author passed away before seeing the film released.

The original novel, long and slow-paced with only occasional action-scenes, would be difficult to adapt to cinema with complete fidelity. Given that Haggard had lived in Africa for years, the trek of the main protagonists, Horace Holly and his ward Leo Vincey, is described with considerable verisimilitude in the novel, but obviously this must be adumbrated for a feature-length film. The 1925 film also skirts the unspoken conflict between Holly and Vincey, which arises from the fact that the former is a homely old fellow and his ward is an Apollonian figure (at least in the novel). To be sure, Holly is acted by Heinrich George, a gnarly, bearded fellow—an intertitle even calls him “the baboon”—but the other half of the conflict would have been doomed had the filmmaker sought to exploit it, since Carlyle Blackwell, the actor playing Vincey, was almost forty—eight years older than the actor playing his “symbolic father.”

In the novel, some of the Oedipal conflicts between Holly and Vincey are brought to the fore when they seek out the legendary city of Kor, and find that it’s ruled by a fabulous queen: Ayesha, She-Who-Must-Be-Obeyed. Ayesha rules over a local tribe, the Amahagger, said in the novel to “more white than black,” and she does so because she’s literally immortal, thanks to her encounter with a mysterious “flame of life.” Ayesha has incredible intellect, and enjoys conversing with the intellectual Holly, but of course most of the arcane discourse must be left out of a movie-adaptation. But Ayesha does aspire to a more permanent union with Vincey, whom she believes to be the teincarnation of her former lover Kallikrates, whom she murdered in jealousy back during the Roman era.

Though the film is only able to suggest bits and pieces of the novel’s romantic grandeur, on the whole its co-directors manage to suggest at least some of that grandiosity despite the lack of dialogue. They did so by resorting to silent cinema’s potential for suggesting more than it shows, and as a result the city of Kor, of which we see very little, comes alive through the bearing of the queenly Ayesha.


I speak of “bearing” rather than beauty, because actress Betty Blythe is only fair in the looks department, never seeming to be a truly bewitching figure. But the script does let this version of Ayesha be a true sorceress, rather than just a sexy white queen. For all the divergences between book and movie, I was impressed by the fact that the script kept a vital scene, When Ayesha curses a female rival, she does so by touching the other woman’s hair, so that the imprint of the queen’s fingers whitens the hair touched.

Though I checked out the resumes of the directors and the principal actors, absolutely none of their other works in silent cinema were familiar to me. One of the two directors continued to act into the sound era, appearing in a couple of serials, while Betty Blythe herself chalked up a long resume of supporting roles throughout the sound era.

Posted by Gene Phillips at 3:15 PM
Email ThisBlogThis!Share to TwitterShare to FacebookShare to Pinterest
Labels: the marvelous