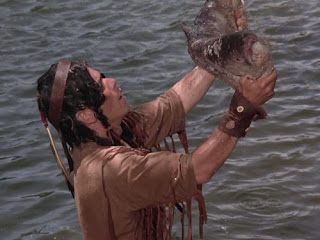 “The Vanishing Image,” though nominally tied into Caine’s search for brother Danny, feels more like a first-season episode, delving into the complex ways that individuals create the meaning in their lives. In a small town Caine sees a group photograph purporting to include Danny’s image, but since Caine does not know which one is his half-brother, he seeks out the person who originally took the picture. Out in the wilds Caine finds Beaumont (Lew Ayres), an aged man who has devoted his entire life to the art of the photograph. A wandering Indian, Matoska, attacks Caine, but after the priest easily trounces the young fellow, Matoska pledges friendship with Caine. However, Matoska doesn’t appreciate the photographer’s art, and eventually becomes consumed with the idea that his soul was stolen by Beaumont’s camera. On top of that, yet another agent of the Avenging Dragon Order also dogs the Shaolin’s tracks.

Despite all of these complications, “Image” displays an elegiac tone with regard to Beaumont, for he has begun to die for his art, from exposure to mercury during his years of developing photos. At no time does the script fault Beaumont for his life-choice, even though it’s clear that he’s sacrificed human attachments. Indeed, in the valley where he makes his home, he venerates a “daughter of the mist” who represents for him the spirit of all the elusive wonders he’s tried to capture with his camera. Caine never sees the alleged spirit, but he does encounter a chimerical wind that suggests an otherworldly presence. Similarly, Caine never scoffs at Matoska’s simple beliefs, but rather helps the youth exorcise his personal fears of having lost his soul.

“A Lamb to the Slaughter” feels like a more subtle take on the basic setup of the “Magnificent Seven” movie. Caine wanders into a town dominantly inhabited by people of Mexican extraction. The Shaolin encounters Mateo (Alejandro Rey), his sister, and his sister’s husband Jaibo. Thanks to a certain token, Caine realizes that Mateo is the son of a sea-captain who lost his life in China protecting both Young Caine and the boy’s father. Caine, remembering his mentor’s words about the paying of debts, wants to repay the debt he owes to Mateo’s late father, but Mateo wants nothing to do with the priest.

However, the town has an ambivalent relationship with its alleged protectors, Zanjero and his small group of gunfighters. In past years, bandits repeatedly ravaged the town. Zanjero drove off the bandits, but he insists on a heavy toll for his services. Zanjero’s high-handed ways lead to Jaibo making an attempt to kill the gunman, but Jaibo perishes by accident. Nevertheless, Mateo, having seen Caine’s skills, enjoins the priest to pay his debt by teaching Mateo to fight. Much to his regret, Caine does so, but while this could have led to the death of either Mateo or Zanjero, Caine manages to forestall any fatalities while at the same time discharging his debt. The ending, while not precisely a cheat, proves something of a letdown.

“The Forbidden Kingdom” is another China-tale, and proves the weakest episode of the entire series. It’s belatedly revealed that when Caine first sought to flee the wrath of the Emperor, his initial plan was to flee not to America but to Tibet. To get there, Caine solicits the help of a beautiful young Chinese woman—who, like similar characters before her, provides the priest with a short-lived love affair. There are assorted fights and escapes, all of which lead to tedium given that the viewer knows that the hero must change his mind and go to the U.S. There’s a modestly amusing scene where Caine confronts a huge bearded fellow who shrugs off Shaolin punches, but the possible fight comes to nothing, much like the episode.

“One Step to Darkness” propels the hero back into metaphysical territory. Back in Young Caine’s time, he experiences an unreasoning fear of a tapestry portraying a demon named Kuei—a fear that seems based in familiarity, though the youth has no memory of having seen the image before. Flashforwarding to the present, Caine intercedes between a young woman, Amy, and an uncouth fellow named Cross. Cross escapes, and Amy’s husband, cavalry commander Starbuck, arrests Caine under the impression that his wife has enjoyed some illicit assignation with the wandering priest. In the course of sorting out the misunderstanding, Caine learns that Cross is Amy’s pusher, supplying her with morphine after she became addicted to it iii China. Indeed, Amy has a token from China that connects the hero with the experiences of his younger self: a joss stick hollowed out for the smuggling of morphine, and topped with the ghastly demon-image of Kuei. There seems to be nothing of the supernatural in Amy’s plight until Caine becomes involved, whereupon Kuei becomes debatably “real.” While the possibility of a shared illusion is never beyond consideration, Amy briefly seems possessed, after which she and Caine are trapped in a sealed cave. Caine frees Amy by seeming to sacrifice himself to the demon, but then finally realizes the early event in his younger self’s life that bound him to Kuei—at which point the Shaolin frees himself from his darkness.

“Battle Hymn” is a pretty mixed bag, apparently concocted to take advantage of the celebrity presence of pop-singer Jose Feliciano. Caine flees a bounty hunter from a nearby town, but the man dies when his horse shies. Caine does the responsible thing and returns the man’s effects to the people in town, but because the bounty hunter also happened to have the clue to a silver mine, some of the residents go after the hidden treasure. Around the same time the priest meets two itinerant musicians, Jonno and Trim, who are seeking a site blind Jonno remembers from his childhood—which just happens to be the aforesaid silver mine. The script piles on the coincidences and doesn’t even have any outstanding fight-scenes.
Posted by Gene Phillips at 2:46 PM
Email ThisBlogThis!Share to TwitterShare to FacebookShare to Pinterest
Labels: combative adventures, outre outfits (u), superlative skills (u), the marvelous, the uncanny