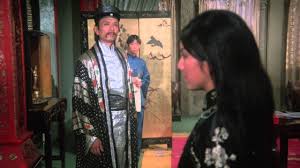 I’m sure that somewhere there exists a record of the order in which KUNG FU’s episodes were filmed, as opposed to the order of their airing (which is how they’re organized on the Warners DVD set). Since I don’t have access to such a record, I can’t fully substantiate my opinion that the last three episodes aired were probably not the last ones filmed. However, the next-to-last episode, “Ambush,” is clearly out of order, since in it Serenity Johnson references Caine’s search for his brother, whom the hero had located in the preceding four-part story. The DVD set includes commentary from David Carradine about the filming of “Full Circle,” the last section of the aforesaid four-parter. Carradine discusses a conversation with a producer as to how he, the actor, would like to end the series. Carradine thought it appropriate to end with Caine walking off into the distance, just as he does in the closing credits, but the producer said that the last scene had to be shot on a soundstage. Carradine does not expressly say that this was the end of the episode he’s discussing, but the description fits the somewhat awkward denouement of “Circle,” in which Caine stands apart from the happy families and bows to them with a closing remark. The last three broadcast episodes, in contrast, have nothing about them that would signify the series’ conclusion.

“The Thief of Chendo” is one of the few all-in-China stories to include both Young Caine listening to his master (though not for very long) and Mature Caine taking on another adventure. Master Po sends the hero to render aid to the Duke Li Yien, but when Caine reaches the noble’s fortress, he’s told Li Yien is dead. However, Po gave Caine an apparently magical ring that glows as long as the Duke is alive, and the ring shows that Li Yien has not yet joined his ancestors. While Caine investigates the situation, he becomes allied to a young master thief, Sing Tao, and the priest even demonstrates his bar-bending abilities when the two are briefly in prison. The upshot is that the Duke’s wicked cousin Chun Yen has imprisoned Li Yien while trying to wrest from him the location of some treasure. In addition, Chun is such a busy bee that he’s also forcing the Duke’s daughter Min Ming to make a political marriage. Some romance between her and the young thief, together with a big fight between Caine and a hefty bodyguard, make this a tolerable episode.

“Ambush,” the last outing for Serenity Johnson, doesn’t come close to his previous episodes. It’s another “find-the-treasure/loot” episode, and in this case the loot is money that an old girlfriend conned Serenity out of years ago. Anti-materialistic Caine is only persuaded to help the itinerant preacher because he wants to use the dough to build a new church, though not much regarding religion of any kind figures into the tale. Jenny (Rhonda Fleming) has her agenda about the money, but a greater danger looms when tough guy Bix Courtney (Timothy Carey) enters the picture. Naturally, Caine doesn’t even work up a sweat trouncing Bix and his fellow owlhoots.

“The Last Raid” in many ways is just as mediocre as “Ambush,” and as the next-to-last story brought back Serenity to scant effect, the last one has Caine pay a visit once more to the Brown family, last seen in the superior second-season episode “The Well.” When Caine visits, Daniel Brown is off fishing with his white friend Jimmy Cooper, but they’re waylaid by the villains, Major Bealson (L.Q. Jones) and his men, all attired in Confederate grey. Are these specters of America’s racism, appearing in response to the innocent union of black and white?

Ah, no, the Rebs don’t even care about Daniel, even though they take both boys captive, and send a note into the nearby town demanding ransom from Jimmy’s father Doctor Cooper. Both of the boys’ fathers are naturally worried as heck, though the female members of the Brown family aren’t let in on the news. Cooper organizes the ransom, while Caine tries to find the raiders. Eventually it’s revealed that Bealson cares less about money than about avenging an old grudge against Cooper, because the two of them were opponents during the Civil War. Bealson is easily the weakest villain in the whole series, and he presents no real threat against the Shaolin superman. The only redeeming facet of the script is the final scene, even though Caine has apparently moved on by then. The Coopers and the Browns, happy to have escaped tragedy, sit down to dinner together, laughing and joking together—and though there’s nothing extraordinary about the writing, the scene at least sums up one of the key themes of the program: the hope that people of all colors can learn to understand one another and find common bonds. This was the aspiration of Classical Liberals back in the seventies, and, though I suppose this ameliorative view would be anathema to modern Progressives, it’s an aspiration that can never be allowed to fade from the ethos of the American people.