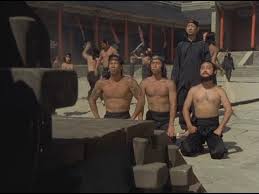 To judge from the increased emphases on Kwai Chang Caine’s family relations, it seems possible that the showrunners suspected that the third season would be the last one for KUNG FU, and that there was some thought of giving the hero some closure to his wanderings.

“Blood of the Dragon” begins with a dynamic two-part adventure. Hitherto, whenever Chiina sent imperial assassins after Caine, each celestial hitman appeared to be a solo operator. “Blood” reveals that for some time the effort to capture or kill Caine has been coordinated by a “school of assassins,” the Order of the Avenging Dragon. The episode opens with a short intro to this school, showing a cowled, whisper-voiced leader calling together three of his best students for a concerted attack on the Shaolin preist.

At the time, Caine is forced to solve the mysterious death of his only known American relative, his grandfather Henry Raphael Caine, played by Dean Jagger in the first-season episode “Dark Angel.” Caine finds his way to a town in California with little explanation as to how he knows he’ll find his late grandfather there, which may be the scriptwriters exploiting the priest’s on-again, off-again psychic proclivities. The mystery takes something of a backseat to Caine’s duels with the three killers, though the bulk of the action transpires in the episode’s second half. The best assassination-attempt is saved for last, as the third assassin conjures up a duplicate of Caine himself to battle the priest. The script does not choose to explain this fairly vivid manifestation of the supernatural. Personally I’ve speculated that the writers might’ve been referencing the Tibetan idea of the *tulpa, * a process by which an adept can bring to life a creation of mental energy that seems both three-dimensional and alive. Needless to say, Caine triumphs over all comers, though the episode ends by suggesting that the Order’s enmity will go on. 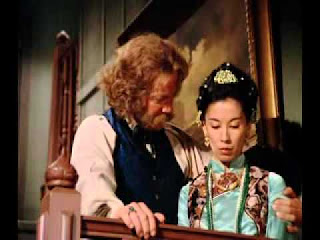 “A Small Beheading” brings the priest into contact with the family member of an enemy: Lady Chi Ching (France Nuyen), niece of the Emperor and thus the sister of the youth Caine slew in anger. Chi wants to kill Caine outright, but her husband, the raffish sea captain Gage (William Shatner) brings the priest a unique offer from Chi’s uncle. Supposedly the offended monarch has been moved to offer Caine clemency for his crime, so that he can return to China in safety (which proves tempting to Caine even though he’s yet to find his half-brother Danny). But as a surety of his devotion of China, Caine must undergo the titular “small beheading,” to have one of his little fingers cut off.

Though there’s no literal supernaturalism here, Caine does seem to have an uncanny affinity with a crow. Later Chi Ching exhibits an extreme fear of crows, which turns out to be an indicator of her guilty conscience (perhaps the writer had in mind another bird of ill omen, the raven of Poe’s famed verse). It should surprise no reader when I reveal that Gage’s offer is a fake-out, and Chi Ching is obliged to reveal this fact to keep her personal sense of honor, even though she desires Caine’s death. In a B-plot, Caine is briefly employed by Ellie (Rosemary Forsyth), a ranchwoman who clearly would like the priest to settle down with her. There’s a short dramatic encounter between Ellie and Chi Ching, and while the incident isn’t exceptional in itself, it does make one realize how rarely one sees in this series a conversation between two or more women, for all that many episodes have strong depictions of female characters.

Posted by Gene Phillips at 3:02 PM
Email ThisBlogThis!Share to TwitterShare to FacebookShare to Pinterest
Labels: combative adventures, the marvelous