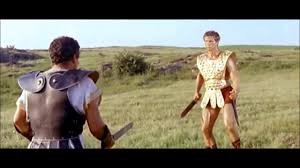 
Though FURY OF ACHILLES may look like your average historical peplum, it’s likely to be the only one to which I assign a high level of mythicity. That’s because, even though it’s a severely adumbrated, ninety-minute version of THE ILIAD, director Massimo Girolami and his scenarists happily focus on certain key elements of the epic poem.

One key element is the frank admission that when Greek heroes go to war, they go with the expectation of plundering not just cities and treasures, but also any women who cross their paths. Achilles (Gordon Mitchell) isn’t as bad as the rest of the invading Greeks, though. When he takes prisoner lovely Trojan maiden Briseis (Gloria Milland), he doesn’t deflower her, but instead regales her with the story of his invulnerability (one thing you WON’T find in Homer’s epic). Still, it’s implied that the other Greeks may not be quite so withdrawn, as one sees in a conversation between Briseis and another captive, when the latter rationalizes that at least they haven’t been taken by gross old men.

The poem also doesn’t in any way imply that a real romance might evolve between Achilles and Briseis. The Greek commander Agamemnon foolishly takes one of Apollo’s temple-maidens for his amusement, and all of the Greeks suffer for this action. Apollo sends down fiery shafts to ravage the Greek camp, and Girolami stages the havoc more ably than many directors of big-budget efforts. (A nice touch is that while all the helpless mortals flee the gods’ vengeance in utter terror, a robed woman, implicitly Apollo’s sister Artemis, stands around watching the chaos.) Following this chastisement, Agamemon surrenders the priestess and then assuages his ego by taking possession of Achilles’ prize Briseis.

All of the resulting action follows the poem closely—Achilles’s sulking in his tent during battle, Hector slaying Achilles’ best friend, Achilles taking vengeance and then eventually surrendering Hector’s body to his father. Obviously, to keep the audience’s sympathies, this version of Achilles does not degrade Hector’s body quite as much as the hero of the poem did. But on the whole, even though the humble budget doesn’t allow for any grand performances, I preferred this version of THE ILIAD to such Hollywood efforts as “the Brad Pitt TROY.” Muscleman Mitchell is the only weak link here, as he’s not capable of more than simple thesping.

SAMSON AND THE SEVEN MIRACLES OF THE WORLD is at least half right. Though the hero in the original Italian production was another incarnation of wandering hero Maciste, at least the scenarists have the hero doing Samson-like feats, such as pulling down pillars and fighting wild beasts (here a tiger rather than the lion of the Biblical stalwart). However, there aren’t seven separate miracles in the story. At one point the English translation attempts to rationalize the title by having a character claim that Samson already did six other miracles and that the movie will climax with the seventh.

I got my hopes up for this re-viewing, having noticed that the director was horror-favorite Riccardo Freda. However, Freda can’t do much with this routine adventure-tale. Maciste/Samson shows up in 13th-century China during the Mongol dominion, and shows the Chinese people how to fight back against a ruler with the un-Mongolian name of “Garak.” Similarly, since an Italian guy plays the leader of the Chinese rebels, the script also has to rationalize him as having had foreign parentage. There’s also another Italian actress on hand as one of Garak’s concubines, and the only Asian actor of note is Japanese-born Yoko Tani, playing an imperiled princess.

Despite the charisma of Gordon Scott, he doesn’t get any good fights or any romance from any of the actresses. The film was shot on sets left over from a couple of more expensive projects with Chinese settings, one being MARCO POLO, so I imagine Freda and everyone else put in minimum effort, knowing the movie was mostly made to amortize the costs of other movie sets. Helene Chanel’s breasts were the only visual effects I cared about herein.

Posted by Gene Phillips at 1:25 PM
Email ThisBlogThis!Share to TwitterShare to FacebookShare to Pinterest
Labels: combative adventures, superlative skills (u), the marvelous, the uncanny