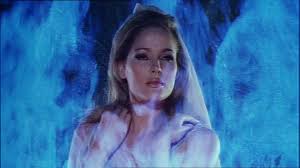 As I’ve not revisited the 1935 RKO adaptation in some time, I tend to rate Hammer’s version as second to the 1925 silent. While the characterization of central character Ayesha is never more than adequate, Ursula Andress wins the beauty contest between the first three actresses to essay the role in feature-length films. Moreover, whereas Andress in most of her films seems to have only two expressions—angry and sexy—there’s some evidence that she did try to put across Ayesha’s majesty, even without a lot of help from the script. (To be sure, Andress was given the same dubbed voice used in DOCTOR NO, so one can only judge her acting through expression.) In addition, long-time Hammer composer James Bernard devised a haunting Ayesha-theme that easily surpasses any musical accompaniment in the other two adaptations.

Those are the film’s foremost pluses. The minuses are more numerous, though they tend to be more like minor aggravations than insuperable difficulties.

I didn’t mind very much that the script altered the relationship between Holly (Peter Cushing) and Vincey (John Richardson). To keep things simple, now they’ve become acquainted through serving in a war, and Holly’s former manservant Job (Bernard Cribbins), who goes along for the ride, is now Holly’s wartime orderly. The script thus situates their quest to find a “lost civilization” as a sort of escapism from the horrors of war, which I found rather reductive. In addition, since the protagonists are not that invested in delving into archaic mysteries, the scripters resort to having an emissary of Ayesha (Christopher Lee) come looking for Vincey, the purported descendant of her ancient love Kallikrates. This plot-ploy weakens the high drama of Ayesha patiently waiting for the reincarnated return of her lost love.

The film is faithful to the development that Vincey, while accompanying his friends on their quest, meets a young Arabian woman, Ustane, with whom he falls in love prior to meeting Ayesha. The questers also meet the Amahagger, the African tribe under Ayesha’s dominion, and though the book gave a decent reason for the tribe to be dominantly white, Hammer chose to have the majority of the tribesmen played by what I assume to be Afro-British actors. One result of the change is that later, when Ayesha consighs a number of tribesmen to a fiery pit, it makes the film appear to have a racial bias that probably didn’t occur to the filmmakers.

Most of the plot-events are reasonably true to the book: Vincey’s mesmerized reaction to Ayesha, her relation of her history with Kallikrates, her assertion of authority over her rival Ustane. The main problem is one of attitude. Director Robert Day, perhaps due to his long history in television production, films everything in a very flat, lusterless manner, so that even though Hammer spent a pretty penny on the budget, the sets and costumes remain underwhelming. With the possible exception of John Richardson, who has the look but not the dynamism of Vincey, all of the actors acquit themselves fairly well. But only Andress seems invested in her role, possibly because she was the center of the story. And not even Day’s banal direction takes away the commingled beauties of Ayesha’s reunion with the Flame of Life, as accompanied by Bernard’s lilting strings.

Unlike the novel, SHE ’65 felt the need to go out with a bang, so at the climax the Amahagger revolt against the people of Kor and Vincey has a fight with Chris Lee’s envious high priest. This makes SHE ’65 the first combative version of the story, with Ayesha functioning as the combative type whose power is largely in her retinue of soldiers and servants.