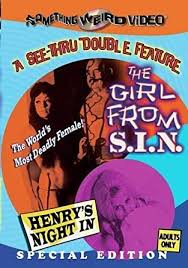 I’ve seen none of the other films directed or photographed by C. Davis Smith, all of which seem to be low-budget exploitation works. But my re-watch of GIRL FROM SIN convinces me that he’s one of the few toilers in the grindhouse trade who was able to have fun with his material.

Most softcore features of the fiftes and sixties are, to use Somerset Maugham’s term, such “monuments to the obvious” that even the ones that have a grim attitude tend to seem laughable to modern audiences. In contrast, when grindhouse filmmakers shot for comedy, many of these prove tiresome retreads of old burlesque routines.

Not GIRL FROM S.I.N., both directed and co-written by Smith. The title references the U.N.C.L.E. TV shows of the period, which in turn evolved from the mega-success of the James Bond movie franchise. Such superspy antics depend on lots of expensive sets, stunts and costumes. Thus it was fairly audacious for Davis to come up with a micro-budgeted spy spoof, shot mostly in dingy apartments and using a narrator voiceover to avoid the expense of a soundtrack. Of course, Davis certainly knew that the only real effects desired by the “raincoat crowd” was lots of naked female flesh and simulated sex scenes. Still, the director does a good job of emulating the same tongue-in-cheek absurdity that made the two U.N.C.L.E. shows memorable.

GIRL opens with its titular seductress, Poontang Plenty (Joyanna, who only made one other film) doing what comes naturally with a nameless victim. She spends a lot of time massaging or pouring liquor on the guy’s feet, perhaps to distract from two facts: that she never lets the action get hotter than kissing, and that she remains clad the whole time, albeit in lingerie. Finally, she kills the guy with two long needles—did they know about acupuucture in 1966?-- and the movie starts.

Poontang proceeds to the headquarters of S.I.N., which happens to be one of the aforementioned apartments. There she meets her boss Doctor Sexus, his aide Bigjob, and one new recruit, “Silk Suit,” the “man from M.A.F.I.A.” The Mafioso is just there as a viewpoint character through which the omnipresent narrator can help explain the rules of
the game. The sinful spies are out to steal a formula for invisibility pills, produced by a scientist named Professor Drake, currently carrying on his experiments in the same apartment building.

Why did Drake and his cute blonde assistant Karen (Mary O’Day) come to an apartmet building for the experiments? Well, it seems Karen has a photographer-boyfriend, Sam, whose studio is the same building. Having Drake’s makeshift lab next door to the studio serves two equally absurd purposes: making sure that Sam can come to the rescue if necessary (no cops or federal agents needed here), and enabling Karen to “keep an eye”on Sam, who photographs a lot of nude women for advertisements—presumably in Playboy Magazine. We also get to see Sam hard at work, taking pictures of a nude woman drinking milk. (Another fetish heard from?)

While sitting around deciding what to do next, Sexus shows off Poontang’s abilities to their new recruit, as she both kayos Silk Suit with karate and beats up the towering Bigjob. But that’s the last time this Pussy Galore wannabe uses martial arts. Her next mission is to get a job with Sam, and though she still doesn’t take off her clothes, she does somehow make a wax impression of the keyhole to the lock next door, so that Silk Suit and Bigjob can invade the lab with no fuss.

However, in the film’s comic highlight, one of the experimental mice, newly made invisible, gets loose in the lab. The deadpan narration tells us that though Karen isn’t afraid of mice she can see, she’s terrified of invisible vermin. So she takes a pull so that the mouse can’t see her. Logical, yes? Also fortunate, since Karen goes invisible when Bigjob and Silk Suit invade the lab. Though they clobber Drake, Karen repels the spies with invisible punches and kicks until they flee without their prize.

That’s probably all I need say of the plot—and yes, it is a real plot, farcical though it may be—to convey the pleasures of S.I.N. Poontang does get two more lovemaking scenes, and she even takes off her bra for a second of two—though her funny attempt to seduce and/or rape Drake makes up for the lack of tit-action. Mary O’Day pretty much carries the burdern for the film’s T&A appeal, though during a lengthy (and unconvincing) torture sequence, she’s allowed to keep her bra on. There’s a big fight between good guys and bad spies at the end, which Davis tries to make exciting with lots of zooming close-ups. The film simply ends with Poontang dying of knife-wounds, with no attempt at a final wrap-up. I doubt that this film gave the raincoat crowd the kind of sin they really wanted, but for modern voyeurs on the hunt for things “so bad they’re good,” this GIRL has the goods.

Posted by Gene Phillips at 5:04 PM
Email ThisBlogThis!Share to TwitterShare to FacebookShare to Pinterest
Labels: combative comedies, the marvelous