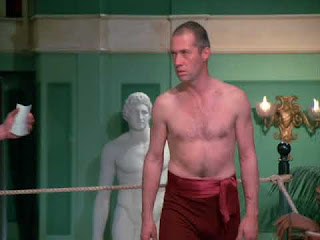 “Barbary House” begins a four-part serial in which Caine finally does catch up to his long-lost half-brother. Despite Caine’s having seen Danny’s portrait in “Vanishing Image,” the Shaolin doesn’t recognize his sibling when they pass one another, Danny leaving San Francisco even as Caine enters. Danny had to leave after inciting the wrath of saloon-owner Corbino (Leslie Nielsen), who now wants Danny dead. Caine’s inquiries lead him to Corbino’s saloon, where brutal boxing-bouts are held for the entertainment of the masses, and where Danny’s son Zeke works to assist Corbino’s own stable of fighters. Because Zeke knows nothing of the enmity between his father and his boss, Corbino hopes to con Zeke into making contact with Danny and then going after him. Caine is one of two elements that disturb Corbino’s plot, the other being a woman named Delonia, who in keeping with the story’s high melodrama, turns out to be Zeke’s long-lost mother. Caine fights one bout as “the Shanghai Kid” before he, Zeke and Delonia flee the city in search of Zeke’s father.

“Flight to Orion” largely functions to pad out the story’s running time. Though there’s a token attempt to form a bond between Zeke and his newfound mother, Delonia must have seemed something of a distraction from the main purpose: that of both uniting father and son and uniting two siblings. Thus Delonia dies. The tears on Zeke’s face hardly have time to dry thanks to another improbable twist. Caine, seeking food for his companions, filches some provender from a tribe of Indians, and though he leaves an item of trade, the Indians only want vengeance. Fortunately, they have a “trial-by-ordeal” custom that gives the priest an out, as well as allowing for a nice four-on-one dust-up. While this goes on, Zeke—whom Caine rather unwisely sends away—gets caught by Corbino, and the gambler tricks the boy into revealing Danny’s general locale.

“The Brothers Caine” brings the Shaolin and his nephew to Orion, but Danny isn’t in the town, having fled to an unknown refuge in the neighboring mountains. Caine and Zeke get a clue from a local lady named Lulu, another of Danny’s lady friends, who (just to really pile on the melodrama) turns out to be Zeke’s surrogate mother, in that Danny had Lulu raise Zeke during his infant years. Corbino brings another ally with him, for somehow he’s made contact with General Cantrell, the father of Zeke’s mother, who doesn’t seem nearly as interested in his daughter’s death as in having a chance to take control of Zeke, in effect stealing Danny Caine’s son as Danny stole the general’s daughter. Additional developments include Corbino employing an assassin who claims magical powers but demonstrates none in his battle with Caine. In addition, Corbino attempting to hoax Danny into killing the brother he didn’t know he had.

By the time “Full Circle” opens, Danny has accepted Caine’s claim of kinship. However, Zeke, in order to protect his father, agrees to return to Cantrell’s ranch as heir apparent to the general. In a complication that’s more or less rushed out, it turns out that Cantrell already a real son on his ranch, name of Tigre. Tigre was the son of another vanished mother, and the implication is that Cantrell could be an “Indian-lover” but not a “squaw man.” Nevertheless, Tigre craves his father’s approval and his name, in contrast to Zeke, who doesn’t want what Cantrell offers. Cantrell is also aware that Corbino plans to set a trap for Danny, but not until Zeke is placed in danger does the general pass that knowledge on to Caine. In the end Danny’s life is saved and Corbino is defeated. The episode’s ending looks as if it might’ve been intended as an ending for the whole series, but three more episodes remained to be aired.