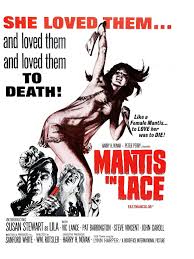 
In MANTIS IN LACE director/writer William Rotsler produced a rarity in the annals of psycho-killer films: one in which the script has absolutely no interest in what makes the psycho kill. There are no submerged traumas, no Oedipal conflicts. Lila, the “mantis” of the title, simply kills people whenever she goes on a “bad trip” from LSD.

This might sound like a promising premise on which to base a late sixties exploitation, but the rest of the film is just as one-note as stripper Lila’s motivation. Lila beds men and then kills them. The cops bumble around looking for the killer. At the end the cops get the wrong guy and Lila escapes, presumably to kill again. In other words, whatever director Rotsler’s accomplishments in other domains—not least that of being a Nebula-nominated SF writer—here he was just grinding one out.

To be sure, I’ve only seen one of the film’s two incarnations. MANTIS emphasizes Lila’s violent murders, while an alternate version, LILA, emphasizes softcore sex-scenes. I’ve seen two of Rotsler’s other grindhouse efforts, and since the sex-scenes were decent in those, perhaps I would’ve liked LILA better than MANTIS. The film I did see, however, may be one of the worst psycho-killer films out there, in part because it has a killer title and does nothing with it. Susan Stewart, while not a gifted actress, proved at least competent, and the theme song proves catchy, even though it’s played so often that it becomes tiresome. 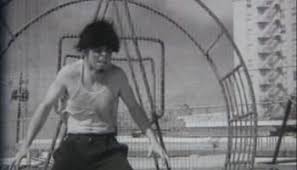 THE GIRL AND THE GEEK—which also appeared under the more romantic-sounding PASSION IN THE SUN—scores better than MANTIS in the “so bad it’s good” category simply by virtue of outrageousness. Director/co-writer Dale Berry throws together a bunch of nudie-style stripper-scenes with two sources of “roughie” peril to the starring stripper, and then lets them all bounce off one another in the barren desert.

This is yet another film with a narrator-voiceover rather than a sound-track. In theory, this might make some of the ellipses in continuity easier to understand, such as how it happens that stripper Josette, on her way to a new job in Vegas, gets kidnapped by two Cuban gangsters. But no, one minute Josette’s on her way to new employment, and the next, the gangsters have her in captivity. If they plan to despoil her, it’s not evident in their actions. The kidnapping does lead to a notably awful scene in which one gangster drives a car along a desert highway, while in the back seat the other crook repeatedly slaps Josette around, and she keeps popping up from his blows like a punch-doll.

Meanwhile, an unnamed, somewhat deformed geek escapes his captivity at a roadside amusement park. Nothing is said about how the managers of the park came to acquire the geek, but he runs around grunting and making wild gestures until encountering Josette. By this time one of the gangsters has killed the other, and the geek knocks off Josette’s other captor. Then she’s on the run again, though she does find time to bathe in a local spring.

GEEK doesn’t rate with the really brain-fried products of the grindhouse era. But at least, having promised the audience the spectacle of a monster chasing a girl for about an hour, that’s what the film puts out there, complete with a last-minute save that eradicates the monster and lets the stripper go on to her rightful reward.

Posted by Gene Phillips at 2:50 PM
Email ThisBlogThis!Share to TwitterShare to FacebookShare to Pinterest
Labels: freakish flesh (u), perilous psychos (u), the uncanny