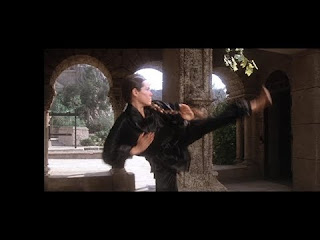 The next three episodes of Season Three were all directed by David Carradine.

“Beseiged” is yet another two-parter set in China, and once again, the starting-point arises from the vagaries of the Imperial will toward the Shaolin priesthood. A huge hairy hermit named Tamo (Victor Sen Yung, nearly unrecognizable in the makeup) comes to Caine’s monastery in Honan, announcing that one of the Emperor’s warlords, Sing Lu Chen, has razed the temple in Fukien with an imported Western device, a long-range cannon. Only a few survivors escaped to take refuge with Tamo, and since some are injured, Tamo needs help to transport the fugitives to Honan for sanctuary. Both Caine and Master Po accompany the hermit back to his lair.

However, the warlord’s soldiers, directly commanded by a secondary villain named Shao, remain on the lookout for escapees. Thus Caine, Po, Tamo, and the two remaining Fukien disciples have a rough time of it, though they eventually make it back to Honan. Caine gets some personal trouble from one of the disciples, a girl in boy’s garb, name of Nan Chi and played by Barbara Hershey (who then went by the name “Barbara Seagull,” as well as being in a short-term romantic relationship with the star of the show). Nan Chi has been given some informal training in martial arts, and, given his upbringing, Caine is rather offended by seeing a female encroach on male prerogatives. The two of them spar briefly, though they produce more romantic sparks than split lips. (For some reason Caine seems to get a lot more action in old China than in the Old West.)

It’s belatedly mentioned that Warlord Sing, in addition to destroying the Fukien Temple in service to the Emperor, also sought to take possession of Nan Chi. Thus he’s presumably acting on his own when he and his subordinate Shao besiege the Honan Temple. Nan Chi does the heroic thing and surrenders herself, but Shao still wants to destroy the Shaolin sanctum. Caine succeeds in foiling the plot, but Nan Chi is written out of Caine’s life with a convenient death-scene. It’s a decent enough adventure, but meager in terms of philosophical aspects. 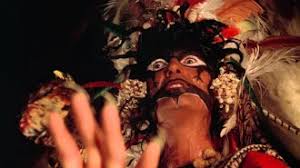 “The Demon God” weaves a more complex tapestry, as well allowing Radames Pera (the actor playing Young Caine) his most challenging episode. Usually Pera didn’t get to do anything but stand around allowing the Shaolin masters to bounce Taoist observations off his shaven skull. This time, he and Master Kan visit the home of an unnamed old mandarin, who feels himself near death and has spent his declining years plumbing the mysteries beyond the grave. Shen, the mandarin’s son, gets the idea to poison Young Caine, so that Shen can garner knowledge from the young postulant as he nears death. Young Caine, though suffering the effects of the poison, must find a way to manipulate his enemy into saving his life.

In a sort of “flash-forward” loosely connected with the adventure of his youthful self, adult Caine is caught in a cave-in and stung by a scorpion. He then suffers what initially seem like delusions brought on by the poison, as a high priest materializes in the cavern, exhorting Caine to become a worshipper of the fire-god Athil. Caine resists both the violence of the priest and the blandishments of a beautiful seductress, who claims that all of her people once worshipped the Aztec deity Quetzalcoatl, but deserted him for Athil, who gave them everlasting life. This bit of backstory seems to transport the tale out of the realm of the “delirious dream,” since there should be no way that a Shaolin priest of the 1800s should know even the name of an Aztec deity. The script does not attempt to rationalize the mystery, but given all the talk about being on the verge of death in both plotlines, but it’s possible to imagine that Caine has been in contact with the ghosts of a long-dead people, and possibly that of a vanished “demon god” as well.

Posted by Gene Phillips at 3:37 PM
Email ThisBlogThis!Share to TwitterShare to FacebookShare to Pinterest
Labels: the marvelous, the naturalistic, weird families and societies (n)