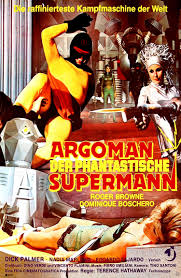 
With a name as contrived as “Argoman,” I’m moved to speculate that the producers of this film were having fun with the name of a slightly earlier European superhero, Superago. The latter character, a costumed wrestler with no super-powers like Mexico’s “El Santo,” had recently appeared in the first of two low-budget Italian films. I don’t know if the first SUPERARGO film reaped big box-office or not, but regardless, it’s quite possible that the real target of any spoofery was the American teleseries BATMAN, which rose to meteoric success in early 1966. Strangely, though, Argoman doesn’t follow the model of either Batman or any masked wrestler, but that of Superman, if Superman divided his time between stopping crimes and committing then.

In this modus operandi, Argoman resembles yet another “saintly” predecessor: that of gentleman-thief Simon “the Saint” Templar. Following a quick action-sequence, the audience sees Argoman (Roger Browne) in his secret ID as rich guy Reginald Hoover. Reggie tells his butler Chandra (Eduardo Fajardo) about some of his recent deeds, like switching out the Mona Lisa for a clever fake.

It wasn’t clear to me whether or not the general public, and officials like police inspector Lawrence, had any awareness that Argoman was both a superhero and a super-thief. However, a budding world conqueror, Jenabelle (Dominique Broschero) checks out Reginald in his skyscraper apartment from the vantage of a sky-ship. Reginald promptly uses his powers to force her ship to land. After a little cat-and-mouse foreplay, they have sex and Jenabelle leaves.

Yes, you heard right.Not that one sees any direct depictions of sex, but here we have the hero making love to his hottie nemesis at the film’s beginning, rather than postponing any possible encounter toward the film’s end. Since there’s even less characterization in this film than in the average peplum, my theory is that, because director Sergio Greco knew that he didn’t have a big budget, he decided to fascinate male audiences with the best “special effect” he had: the sultry Miss Broschero (who appears in a wide variety of bizarre but comely outfits).


Having given away the milk for free, though, the rest of the film isn’t able to up the ante. For a superhero film, it’s very talky. Though there are some nice sets and super-villain gimmickery (Jenabelle plans to conquer the world with robot doubles, including one of Argoman), the pace is flaccid and there are too few fight-scenes, causing me to wonder if fight-choreographers were left out of the budget. Additionally, since Argoman has no origin, he just pulls any power he wants-- x-ray eyes, magnetism, and so on-- out of thin air.

Despite the attempt to make the hero a bit of a Fantomas-style rogue, there are no prominent areas of camp or satire here. It just seems like a wonky, tongue-in-cheek attempt to exploit the success of the sixties breed of American costumed heroes. Roger Browne, better known for his superspy adventures, tries to give his character some insouciant qualities, but the script doesn’t really get how to do either a straight or satirical superhero adventure, and so remains little more than a footnote in the genre’s cinematic history.