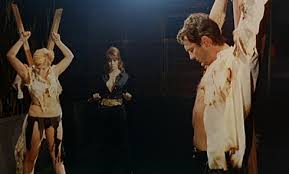 Mega-prolific Jesus Franco directed SUCCUBUS (original title NECRONIMICON) as part of a deal for three pictures, all featuring model-turned-actress Janine Reynaud. I’ve reviewed the other two flicks—the so-called “Red Lips”movies—and my verdict was that they were cheapjack excuses for adventure-films. However, they have one virtue that SUCCUBUS does not: they were not excessively pretentious.

In a DVD interview about the film, Franco talks about SUCCUBUS being the first film over which he had real creative control, and about how it debuted, unlike most of his movies, at some film festival. I noticed, though, that he didn’t discuss any of the ideas that informed the film, despite the fact the script drops names of literary luminaries like Sade and cinematic celebrities like Godard. In the interview he claimed it was a virtue that he’d made a film that he himself didn’t understand. But viewing SUCCUBUS didn’t leave me with the impression of an artist filled with visionary fire. I might not like a lot of Godard, but there are always some ideas swirling around even in his worst films. Franco is just a con-man, dealing in phony-baloney surrealism.

Lorna Green (Reynaud) initially seems to be some torture-happy psycho akin to other Franco fiends, for she’s first seen tormenting a man and woman in chains. But it’s soon revealed to be a Grand Guignol act for an audience. However, Lorna’s manager Mulligan (Jack Taylor) thinks some decidedly odd thoughts about how he’s molded her into an evil being he can manipulate. The two of them indulge in lovemaking, but this too is erotica for the extrinsic audience of the film, and in contrast to some of Franco’s earlier films, the viewer never has a definite sense of what the controller has in mind for his unwitting puppet. Lorna experiences some odd encounters with Spanish monks, with a dead man at a funeral, and some wild sex-games at a party—and at some point, she loses her ability to separate herself from the sadistic character she plays on stage. Lorna hooks up with a hot blonde lady, has some brief Sapphic sex, and then murders her. Similarly, she attacks the two actors she normally pretend-tortures on stage. She seems to get killed by police, but returns long enough to kill Mulligan. The end.

Strangely, though Franco name-drops the Marquis de Sade three times, neither the sex nor the violence ever has Sadean overtones. I believe that Franco may have making some ill-considered attempt at Sadean fantasy, since one of his next projects was a loose adaptation of the French author’s PHILOSOPHHY IN THE BOUDOIR. But the references to Godard seem more telling, for on the whole SUCCUBUS is all about Franco trying to mimic the distancing effects of the French New Wave. Godard’s 1965 ALPHAVILLE tosses out light-hearted references to Marx and to comic strip heroes. So in SUCCUBUS Franco has Lorna and Mulligan drivel a while about which authors or musicians are “in” these days. More absurdly, Mulligan plays a word-association game, asking Lorna for her opinion of various horror-icons, represented by small plastic toys of the Frankenstein Monster, the Phantom of the Opera, Dracula, and a dinosaur that slightly resembles Godzilla. Regardless of the subject, Franco really has nothing to say about any topics, he’s just trying to impress people with his Godardian devices. (In the interview, Franco claims that he didn’t take the original NECRONOMICON title from Lovecraft, but a real ancient manuscript on which Lovecraft based his fictional text. This could well be a literary hoax, but it’s not interesting enough to investigate.

There are various scenes in which reality seems to get temporarily out of whack, and clearly Franco doesn’t care whether the viewer interprets it as demonic agency or Lorna losing her mind. The only time this stratagem becomes visually interesting takes place during the murder of the blonde, in that a bunch of clothes mannequins come to life at the same time. Since most of the reality-bending scenes don’t connote anything, I choose to view them as evidence of Lorna’s mental disintegration. But Reynaud is too bland an actress to earn much empathy for her plight. Indeed, her attitude renders even her nude scenes boring.

There was just one act of name-dropping I appreciated, probably because it was the last one. As the film ends, a voiceover compares Lorna to the character “Faustine” from one of the poems of masochistic poet Algernon Charles Swinburne. Since this may well be the only time Swinburne ever got any exposure in cinema, I guess that’s some sort of accomplishment.

Posted by Gene Phillips at 10:51 AM
Email ThisBlogThis!Share to TwitterShare to FacebookShare to Pinterest
Labels: delirious dreams and fallacious figments (u), perilous psychos (u), the uncanny