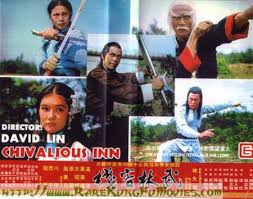 
One IMDB review of this low-budget Taiwanese chopsocky asserted that it was a response to an earlier film, DRAGON GATE INN, which I have not seen. This seems very likely, since CHIVALROUS is filled with scenes in which actors bounce off one another with even less setup than one sees in the most average kung-fu flick. On top of that, the titular inn—a site where Ming loyalists converge to plot against the tyrannical Manchu dynasty—barely figures into the story after the first thirty minutes, after which the heroes and villains are just running around through caves and forests most of the time.

There’s a vague murder-mystery plot about loyalists being killed off by a Manchu general (Chang I) who’s a master of “the bloody stroke,” a kung-fu move he uses to kill people instantly with his outthrust fingers). Aside from the fact that the villain is made up to look like one of many hundreds of “white eyebrow” evildoers, the only other halfway interesting element is that female lead Lung Chung-erh—teamed up this time with male lead Carter Wong—belongs to an all-female tribe living in a hard-to-reach domain called “Cloud Valley.” Lung’s character introduces herself to the hero by killing off a bunch of his enemies with flowers that exude poison. Apparently all the women in her tribe are masters of floral poisons, although they’re not exactly possesses of good memories. When Wong asks Lung how her people came to live in the valley, she can’t seem to recall. Good thing he didn’t ask her how their male-less tribe renewed its ranks.

Carter Wong is just average in the fight department here, but there are some nice scenes by Lung Chung-erh and by Chia Ling, playing a side-character.

Posted by Gene Phillips at 1:10 PM
Email ThisBlogThis!Share to TwitterShare to FacebookShare to Pinterest
Labels: combative adventures, diabolical devices (u), superlative skills (u), the uncanny