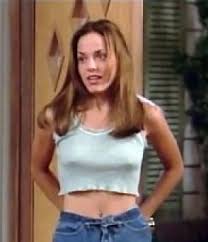 I mentioned in DEGREES OF MASTER ANDBACHELORDOM that the teleseries MARRIED WITH CHILDREN possessed a loose bachelor-thread, more or less reducible to the show’s frequent gag-line, “A Bundy never wins, but a Bundy never quits.” In addition, I’ve observed a lesser bachelor-thread in assorted episodes, which can be expressed with a play on a 19th-century lyric, “Men must work, and women must weep.” In the world of MWC, this becomes “Men must lust, and women must torture them.”

For most relevant episodes, Al is the primary recipient of the torture. Even the series-title expresses that he’s condemned to be “married with children,” which means providing for a wife and kids—wife Peggy, daughter Kelly and son Bud-- who hold him in contempt. As with his spiritual predecessor Dagwood Bumstead, Al is also frequently subjected to both physical and mental cruelty by the rest of his family. However, whereas outside the household Dagwood usually only suffered at the hands of other men in the workaday world, Al is victimized by both male and female antagonists, particularly by fat women attending the shoe-store where Al labors. Indeed, there’s often a sense that women in general exist to torture men. In keeping with this informal principle, MWC also devotes considerable time to the torture of Al’s son Bud Bundy. As far as familial sufferings, early episodes confined most of preteen Bud’s agonies to verbal torment, usually coming from Bud’s dimwit but more sexually active sister Kelly. On occasion writers seemed tacitly aware that Kelly tormenting Bud paralleled the regular assaults that Peg mounted upon her husband. In an early episode Kelly asked her mother whether she minded that she Kelly teased Bud, and Peg responded, “No, that’s why we had him!”

As actor David Faustino grew older, MWC scripts set up teenaged Bud for many greater sufferings, mental and physical, and he too also paid a price for being a mere male in a female-centric world. Further, the writers also pushed the parallel that Kelly sometimes devoted herself to torturing Bud as much as Peg did with respect to Al. Of course, while Peg constantly badgered her disinterested husband to provide sexual pleasure, Bud only got mockery from Kelly because he wasn’t getting as much sex as she was. But on those occasions when Kelly physically tortured Bud—often pretending ignorance that she was hurting him—the scripts ventured away from the territory of simple slapstick and more toward the domain of Sade. This progression can be seen through the lens of four ninth-season episodes dealing with a support-character named Amber, whom I interpret as a reinforcement of Kelly’s sadistic relationship to Bud. 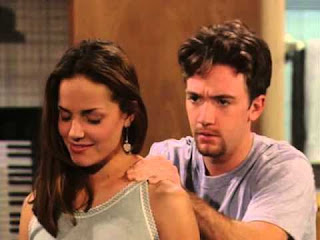 Amber (Juliet Tablak) shows up in a Bud-centric episode where he’s atypically not attempting to find sexual satisfaction. He’s studying to ace his tests for college, in the hope of escaping the poverty of his immediate family. Attempting to study, he gets rid of Al, Peg and Kelly by giving them money to leave him in peace. This engenders one of the show’s slight flirtations with incest-tropes, for Kelly is so happy over the windfall that she tells Bud, “If you weren’t my brother--" Bud pays the comment no attention except to make a joke at the expense of Kelly’s sluttiness.

However, once everyone’s gone, Bud gets distracted in a good way by Amber, who has moved in with her aunt Marcy (Al’s feminist nemesis, and on two occasions, one of Bud’s sexual interests). Unlike most of the women Bud meets, Amber almost immediately has sex with him, despite evidence that she’s already had a lot of sex with other guys. Amber distracts Bud so much that he fails his college tests, though future episodes send him to a university anyway, and for once an episode ends with the prospect of Bud getting multiple rolls in the hay.

Amber’s second appearance in the episode “Sleepless in Chicago” is a mere throwaway in which her relationship to Bud is not referenced. The main plot concerns Al’s agonies when, for involved reasons, must take Jefferson’s place in bed with Marcy, hence the “sleepless” aspect of the title. Amber appears in one scene, walking into the room where Al, pretending to be Jefferson, hides his face. This loses him the chance to see Amber display her breasts in the presence of her supposed uncle-by-marriage. As a minor point, Kelly endeavors to get some attention from her father. Upon failing, she remarks that Al’s lack of paternal affection has resulted in her seeking the company of older men with money. 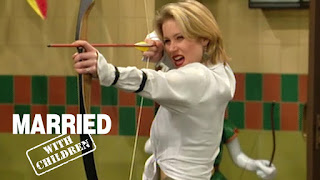 Neither of these episodes, though entertaining, are mythically significant. However, the third Amber story, “Kelly Takes a Shot,” increases her psychological mythicity by making her Kelly’s ally in Bud-torture. Bud importunes Amber for more sex, but she insists on waiting until the time is right for her. Amber also criticizes Bud for “taking shots” at Kelly by ridiculing her acting talents, and further implies that Bud’s not getting any until he helps Kelly’s acting career. Bud unknowingly plots his own doom by guiding Kelly to audition for the commercial role of “the Fryer Tuck Girl.” To win this honor, Kelly must beat a more experienced competitor in an archery-contest. Kelly is quite aware that Bud’s using her to get a “shot” with Amber, and when the contest comes down to performing a great feat of archery to impress Fryer Tuck, Kelly retaliates by announcing that she’s going to shoot an apple off Bud’s head. After terrorizing her brother, Kelly has a moment of compassion and spares Bud—but only until her opponent insults Kelly. At this point Kelly launches her arrow, almost carelessly, and neatly impales the apple. Bud, however, is so terrified by the experience that he regresses into childhood. Later, when Amber approaches him to give him his reward, he responds, “Yuck, girls!” 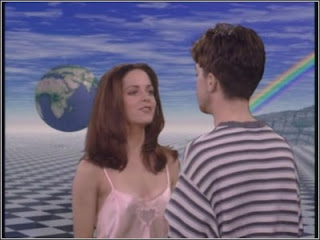 Bud recovers his normal propensities in time for the final Amber-sode, “User Friendly,” but once again, Amber won’t put out. However, in one of the show’s occasional ventures into the metaphenomenal, Bud gets sexual healing from a university “virtual reality” program. Within the context of an advanced VR-program, Bud can have all the sex he wants with a computer-image of Amber. But it’s not Amber who initially takes issue with Bud’s horniness, but Kelly, who protests that the sex isn’t real. Bud then has a long speech in which he condemns women for the way they exploit the male of the species.

Now, it should be kept in mind that when Bud has imaginary sex, this should be no skin off Kelly’s nose. However, as if both Kelly and Amber feel threatened by male independence from female control, they join forces to sabotage Bud’s virtual fantasies. They enter the VR laboratory and alter the input to Bud’s brain so that he imagines himself participating in the mating-ritual of a tribe of apes It’s not expressly stated that Bud is subjected to the role of “the female” in the experience, though that type of humiliation would certainly be within the series’ bailiwick of low comedy. Later Kelly and Amber exult in their victory over men while Bud watches a nature-show and becomes aroused by sexy apes. The character of Amber never reappears after this episode, and the writers didn’t make another attempt to give Bud a regular girlfriend. Nevertheless, for the remaining two seasons, Bud's sister continued to provide him with his almost weekly dose of submission.

Posted by Gene Phillips at 4:25 PM
Email ThisBlogThis!Share to TwitterShare to FacebookShare to Pinterest
Labels: diabolical devices (u), the naturalistic, the uncanny