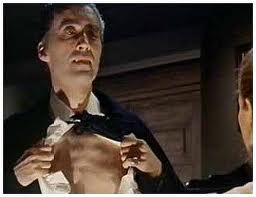 
With this review of Terence Fisher's DRACULA PRINCE OF DARKNESS on Halloween 2011, I achieve my main goal to post an average of one metaphenomenal movie-review a day, with PRINCE bringing the overall count to 33 flicks reviewed this month. Obviously compared to other online review-blogs, this is just a drop in the proverbial bucket-o'-blood. I'm considering seeing how the review-a-day project might pan out if I aspired to keep it going on a regular basis, in patent emulation of Dave Sindelar's "Movie of the Day" postings on Classic Horror Film Board. It's at least theoretically possible, but no promises at this time.


In terms of internal continuity PRINCE takes place ten years after Hammer's HORROR OF DRACULA (1958). As all good horror-fen know, in between the two films Hammer attempted to foist a faux-Dracula upon audiences in 1960's BRIDES OF DRACULA, though no actual character in that film is even named "Dracula."

PRINCE is a decent enough follow-up to the first film, though perhaps its most disappointing aspect is that after the title gives Dracula such a lordly introduction, he does nothing but grimace and snarl through most of the story, rather than impressing one with the combination of elegance and brutality seen in HORROR. Lee claimed he refused to speak the dialogue written for him, while Sangster, writer of the PRINCE screenplay, claimed that he intentionally reduced this Dracula to his near-silent status. I can't help suspecting a third reason for the vampire-lord's silence, possibly revolving around the mundanities of actors and producers dickering over money matters. In later Hammer films Dracula regains his volubility, so it's likely fans will never know the answer to the Mystery of the Mute Monster.

The setup of PRINCE is efficient enough. Four English travelers wander into Carpathia, encountering many superstitious peasants and a flamboyant Christian monk, Father Sandor (Andrew Keir). Despite warnings from both the Father and the peasantry, the travelers happen upon the seemingly abandoned Castle Dracula. In contrast to the majority of unwary travelers, these characters get one moment, courtesy of Sangster's script, in which they almost take the Right Road, for initially they plan to bed down for the night in an abandoned woodcutter's hut. However, in a moment evocative of both the Stoker novel and the Browning Universal adaptation, a driverless horsedrawn coach finds its way to the foursome. When they investigate by boarding it, it whisks them to the castle. They soon meet the castle's sole manservant, Klove (Philip Latham), who tells them that though his master Dracula is dead, he left behind instructions that visitors to the castle should always receive princely treatment. Three of the travelers-- cheerful Charles, his wife Diana, and his brother Alan-- think it's all a pleasant adventure. The fourth one, Alan's wife Helen (played as an uptight scold by fan-favorite actress Barbara Shelley) is ironically the only one sensitive enough to feel presentiments of evil.

The evil doesn't waste time making itself felt. Klove lures Alan out of bed and kills him, hanging his body up like a pig's corpse so that Alan's blood will drip down into a crypt full of Dracula's ashes, thus reviving the Count to full fleshy health. Dracula then shows termagant Helen who wears the pants in the new undead family, vampirizing her. Soon Dracula and his new bride confront the stunned Charles and Diana. However, the English couple has paid attention to some of the mythology about vampires. They manage to win free using crosses, both real and makeshift, to drive away the two vampires, and later take shelter in Father Sandor's monastery.

Lest any viewer wonder why Dracula doesn't go looking for new victims to celebrate his reborn status, Sandor tells the couple that because Dracula has now come near enough to touch Diana, the vampire considers Diana to be his property (shades of Freud's "jealous father" idea!) Soon Dracula finds himself a "Renfield"-like agent who admits him to the monastery. He comes very close to vampirizing Diana via the method described in Stoker's book, by having her feed on his blood at his bared breast (see illo above). However, he's interrupted and has to abandon her. Shortly later the priests kill Helen. Dracula, in an action once more evocative of Stoker, flees back to his castle courtesy of Klove and a horsedrawn wagon. Just as the sun sets Charles attempts to vanquish Dracula by opening his coffin-- at this point spilled out onto an ice-floe-- and staking him. Dracula arises and almost kills Charles. But Sandor, given an idea by Diana, shoots holes in the ice-floe so that Dracula succumbs to the running water beneath the ice.

This particular death-of-Dracula is one of the more inventive ones invented by Hammer Studios writers. In addition, this may be the film most responsible for promulgating the metaphysical idea of Dracula's supposed vulnerability to running water. To be sure, Stoker never says that vampires are harmed by such things as streams and rivers, only that they cannot cross them. Still, since running water connotes purity, as against stagnant water, the extension of Stoker's idea seems poetically valid.

Psychologically, it's interesting that writer Sangster reversed the characterization of the "Lucy Westenra" figure. In the Stoker novel, as in some though not all Dracula-adaptations, Lucy is somewhat flirtatious toward a variety of men. Shelley's Helen is just the opposite: constantly finding fault in everything, not least her husband. However, where Charles criticizes Helen for never wanting to leave her homeland, her fate-- being seduced by Dracula and killed by the priests-- is something of an negative object lesson: this is what happens even to prim English ladies who leave their native bailiwick.

I'm not certain or not whether PRINCE is the first time a movie depicted Stoker's method of vampirization, in which the aspiring vampire must drink his/her master's blood. Many vampire flicks from Hammer, Universal and elsewhere seemed satisfied to imply that the vampire bite was all that was needed. PRINCE also created a new expectation with regard to how often the vampire could come back from death. Some fans have wondered why there was never a distinct Universal series built around Dracula, apart from his role in later "monster mash" films, and I'd speculate that filmmakers in the 1930s and 1940s might have been wary of claiming that this kind of blasphemous corpse-activity could take place on a regular basis. But even if Hammer didn't always make the best use of Dracula, they deserve credit for promulgating the image of Dracula as not just "the undead," but in a very real sense, the "never-dead."

Posted by Gene Phillips at 1:29 PM
Email ThisBlogThis!Share to TwitterShare to FacebookShare to Pinterest
Labels: the marvelous