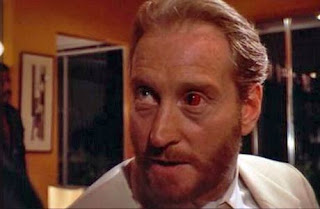 Directed by John McTiernan, who helmed two classic 1980s action-opuses-- 1987's PREDATOR and 1988's DIE HARD-- THE LAST ACTION HERO offers fewer interesting observations in terms of its somewhat over-obvious repetitious script than in its attempt to push the adventure genre toward comedy without actually becoming one.

Comic spoofs of "serious" adventure genres have been around since the birth of cinema, but HERO isn't really a spoof, for all that it makes fun of the tropes of what the film calls "action movies."  Perhaps McTiernan and his writers didn't want to bite down too hard on the hand that fed them, but I prefer to believe that beneath all the jokes there lay a desire to validate the absurd excesses of adventure-cinema.

The plot is as straightforward and simple as any "straight" shoot-'em-up.  Middle-schooler Danny Madigan constantly escapes reality by cutting school to watch adventure-movies, with his favorite being a series starring maverick cop Jack Slater, played by real-life actor Arnold Schwarzenegger.  Danny's behavior exasperates his widowed mother, but the script suggests-- without overdoing the pop-psychology-- that Danny finds in Slater a role model for masculine behavior in lieu of his late father, much as young John Connor bonds with Arnold the Terminator in 1991's TERMINATOR 2.

However, where a comedy would make this identification ludicrous while an ironic satire would make it deplorable, HERO actually shows that Danny has learned his lessons pretty well.  True, when a magical "golden ticket" transports Danny into a dimension where Jack Slater and his adventures are all real, Danny constantly points out the artificiality of the tropes with which Slater lives, as with the "cartoon cat" who's one of Slater's fellow officers.  Nevertheless, Danny bonds somewhat with the thick-witted Slater (also Schwarzenegger of course), and shows considerable insight into the male relationships encoded by the adventure-genre, noting how the acrimony between Slater and superior Lt. Dekker masks their strong feeling for one another.  It's also evident that Danny isn't a brainwashed movie zombie: that he can recognize the excessive sexism of adventure-films, as when he and Slater visit a video-store in Slater's world and Danny points out that all the workers in the store are improbably beautiful models.  And of course, though Danny has to be dragged kicking and screaming into being an adventure-hero, he does step up to the bat, whereas a real comic hero would find ways to undermine the whole "proving oneself" process.

Most of the movie's comic moments are passable but nothing special.  HERO's best moment arrives when one of Slater's villains, the chilling Mr. Benedict (a very excellent Charles Dance) gets hold of Danny's magical ticket and escapes to Danny's world.  When Slater and Danny follow, Benedict exults to them about the chaos he can bring about in this universe:

Dracula? Huh. I can get King Kong! We'll have a nightmare with Freddy Krueger, have a surprize party for Adolf Hitler, Hannibal Lecter can do the catering, and then we'll have christening for Rosemary's Baby! All I have to do is snap my fingers and they'll be here. They're lining up to get here, and do you know why Jack? Should I tell you why? Hmm? Because here, in this world, the bad guys can win!


Of course Benedict is defeated and the two heroes return to their respective worlds, somewhat wiser for the experience but still preferring their own domains.  But the Benedict-speech makes a persuasive argument in favor of the adventure-genre that a comedy never could: the enjoyment of adventure's excessive unreality purely as a compensatory mechanism against the fact that in reality, "the bad guys can win."  A satire might suggest that this could only be a negative compensation, but HERO-- admittedly in a very simplistic, unphilosophical manner-- suggests that the compensation is basically positive in nature.  Even if we know (metaphysically speaking) that evil can win in our world, the desire that good *should* win does not imply that said desire is merely avoidance of reality.  Rather, HERO-- and heroes generally-- exist to suggest that reality can be changed for the better.
Posted by Gene Phillips at 3:09 PM
Email ThisBlogThis!Share to TwitterShare to FacebookShare to Pinterest
Labels: combative adventures, the marvelous