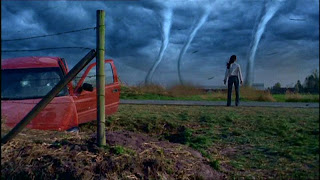 The final five episodes of SMALLVILLE's first season prove a little more impressive in terms of their mythic/symbolic content.

"Reaper" is a variation on the vampire theme, but this time the vamp-like character kills not out of a physical need, like Sean in "Cool," but out of a psychological repetition-compulsion.  A young man named Tyler, who happens to have placed a kryptonite fragment in his bracelet, visits the hospital room of his terminally ill mother. She cries out for him to end her pain, and he responds by trying to mercy-kill her. In a struggle with hospital security, Tyler falls out a window to his death.  However, by the time he reaches the coroner's slab, the kryptonite brings Tyler back to life, resulting in a very creepy scene in which Tyler wakes just before the coroner can make his first incision.  After killing the coroner with his life-draining powers, Tyler-- who believes he's successfully killed his mother-- goes on a hunt for others who desire easeful death.  In more mundane matters, Lana's boyfriend Whitney becomes increasingly depressed over his sick father's worsening condition, while Jonathan Kent once more feels compromised by the Luthor money when Clark suggests that he and his father forego their annual fishing-trip in order to take in a baseball game, to which Lex has given Clark passes.  Clark eventually butts heads with Tyler but manages to resist having his life-force drained.  However, when Clark reveals to Tyler that his euthanasia attempt on his mother did not succeed, Tyler turns his power on himself and dies.  During one of the many emotionally-charged conversations between Lex and Jonathan Kent, Lex asks Jonathan if he wouldn't like to find out the truth behind an apparent miracle.  Jonathan replies that he prefers to accept his miracles as given.

"Drone" is considerably lighter than its predecessor, returning to the trope of the krypton-powered menace who consciously seeks to further his or her advantage-- though the goal is pretty small potatoes this time.  Two students at Smallville's high school, both of whom are competing for the office of student president, are attacked by malicious swarms of bees.  Soon the suspicions of Clark and Chloe fall upon the remaining candidate Sasha Woodman. It seems that some time ago Sasha survived an accident when she fell into a local declivity (named, with the usual in-joke, as "Schuster's Gorge") and was stung by 1000 bees-- yet did not die, despite being highly susceptible to bee venom.  The heroes soon deduce that meteor-rock radiation has given Sasha the powers of a queen bee, but as it happens Clark is also Sasha's hit list, in that Pete has talked him into running for student president as well.  (His slogan: "the Man of Tomorrow.")  Clark manages to break Sasha's hold on the bees but doesn't win the race for president.  A minor subplot involves Lex being pursued by an investigative journalist named Carrie Castle, who might have been intended to play the role of a foil but never appeared again-- unlike Sasha, who was resurrected (and played by a different actress) in the 2007 episode "Cure."  Though Lana is still faithful to Whitney, she does a very girlfriend-like thing by encouraging Clark to read her his abortive acceptance speech.

"Crush" brings to the fore the unrequited affection Chloe feels for Clark, as she grows jealous of Clark's attentions to Lana.  She also accuses Clark of having a "savior complex," in which he's willing to save her life but remains otherwise "emotionally unavailable," which sounds like a pop-psychological critique of the entire Lois Lane-Superman relationship.  Chloe finds a new boyfriend in Justin, a local artist whose hands were injured in a hit-and-run accident, and Clark for the first time does feel some degree of jealousy at his gal-pal's new situation.  But of course Justin is the meteor-freak-of-the-week, having received telekinesis powers from meteor exposure.  He first causes the maiming of the doctor who botched an operation on Justin, and then goes looking for the unidentified hit-and-run driver.  He thinks he's found him in Principal Kwan, but after he's killed Kwan, Clark discovers that the guilty party was Kwan's son Danny, who was driving his father's car when he hit Justin.  Clark subdues Justin with his powers, after which the law commits Justin to a juvenile home even though they've no evidence of his telekinetic crimes.  This setup could have made it possible for Justin to return as a supervillain, but the character never returned.  Lana becomes  disturbed when Clark confesses his interest in Chloe, confirming that her affection for Whitney has waned.  In a Luthor subplot, Lex is visited by his former nanny Pamela Jenkins, who seeks a reconciliation because she deserted him shortly after Lex's mother died.  Lex refuses to forgive her, telling Clark later that he only loved two women in his life, one who died and one who betrayed him.  Then Lex learns that Pamela has terminal cancer, and forgives her after she reveals that Lionel forces her to desert Lex.  The episode ends on yet another sombre note as Whitney's father passes away.

"Obscura" references the idea of a "camera obscura," which means a camera that can relay pictures of its own surroundings.  Lana happens to be in the company of two Smallville deputies when a kryptonite-flavored explosion takes place, with the result that Lana sometimes becomes a living camera obscura, seeing through the eyes of one of the deputies as he plots to kidnap Chloe Sullivan.  Meanwhile, Lex seeks to break with journalist Roger Nixon, one of the informants he had investigating the Kents way back in "X-Ray."  Nixon prevails upon Lex to interview a crop-duster who was airborne during the meteor-strike and witnessed a ship fall to earth with the meteors-- thus giving Lex his first real clue that a sentient being may have descended to Planet Earth during the bombardment that cost Lex his hair.  Lex begins to investigate the Kent property under cover of making a survey of some environmental damage caused by Luthorcorp (referenced in an earlier episode). Despite all the super-powered entities that have been running around for the past year, Lex makes the odd statement to the Kents that there's "no proof" that the meteors harm anyone-- apparently some writer's misstep, since Lex has no reason to conceal the real effects of kryptonite.  Nixon finds a tiny piece of metal from the Kryptonian ship and presents it to Luthor, whose pet scientist Hamilton is utterly unable to analyze it.  Clark, having foiled Deputy Watts' plan to imperil Chloe so that he the deputy could rescue her and become a hero, must then keep Watts from killing Lana.  Watts becomes the first villain to behold his bullets bounce off Clark's chest, but he never gets the chance to tell anyone, as Watts dies in a gun-battle with police.  Clark asks Chloe to attend the spring formal with him.  An offhand reference to "Cadmus Labs" keeps that particular ball in the air.

By its very name "Tempest" references the stormy passions of the soap-operatic tv series, which crank into high gear for the first season's final episode.  Chloe and Clark make plans for the formal dance, with Chloe expressing the fear that at the first opportunity Clark may bolt to seek out Lana-- which he does do by episode's end, though purely for altrusitic reasons.  Lionel returns to undermine his son once more, announcing the closing of the Luthorcorp plant as a scheme to force Lex to work under Lionel.  Lex tries to save the plant by making an alliance with Smallville homeowners to buy out the business; in so doing Lex both serves their interests and his own.  Whitney announces that he plans to join the marines, which Lana interprets as his "putting on a uniform and saving the world."  Nixon, not satisfied with Lex's progress on the alien-ship investigation, sets off an explosion near Clark, giving the journalist confirmation of Clark's invulnerability.  On the night of the formal, while Clark escorts Chloe to the dance, all the other plotlines come to a head in a "perfect storm" symbolized by the appearance of three tornado-funnels.  As Jonathan and Martha flee to the storm cellar, they find Nixon, who has broken in and discovered the ship; while Jonathan wrestles with the man threatening his son's secret, Nixon loses the metal piece of the ship (last seen in Lex's possession as I recall) and the piece joins with the dormant ship, causing it to spring to life before a confused Martha Kent.  The storm also hits the room where Lex and Lionel are arguing, putting Lionel's life in peril and giving Lex the chance to either save his father or let him die.  Finally, Lana, having seen Whitney off on the bus taking him to marine camp, drives back to town and is herself caught up by the tornados.  Clark, having learned of Lana's peril at the dance, leaves Chloe there and arrives on the scene, only to be pulled into the tornado that has captured Lana and-- To Be Continued in Season Two.