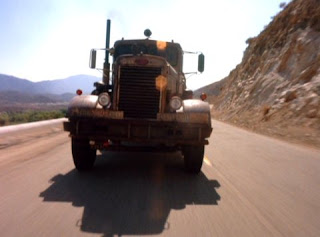 DUEL, certainly one of the three most celebrated television movies of all time, has been praised so effusively that there’s no need for me to add to the chorus.  Thus, accept as a given my agreement with all the praise of Richard Matheson’s adaptation of his original short story to telefilm format, Steven Spielberg’s tense direction and Dennis Weaver’s strong performance as an everyman driving cross-country and falling prey to the menace of a maniacal tanker-truck driver.

The one original thing I can say about DUEL is of course in terms of my NUM theory.  On the face of things, DUEL sounds much like what I’ve usually described as a naturalistic thriller in ARCHETYPAL ARCHIVE essays like THRILLER KILLING.  Certainly most if not all of the “vehicular violence” films that came out in the forty-plus years following DUEL’s oil-drippings, including 2000’s ROAD RAGE, which may well be the worst of that breed.

However, the one element most of the imitators did not follow was the uncanny sensibility with which Matheson and Spielberg treated their subject matter.  In naturalistic thrillers, a psycho-stalker, however dangerous, is fundamentally intelligible.  The audience may not understand the stalker’s motivations in all respects, but he is not constructed as being beyond ordinary experience in any way: he’s merely an atypical extreme within a naturalistic phenomenality.

In uncanny thrillers, however, the psycho-stalker does have carry such a construction, some aspect of mysteriousness that cannot be reduced to commonplace experience.  Years before the “slasher-film” craze promoted the idea of the psycho-killer whose face is not seen by the audience until the conclusion, Spielberg employs the same visual trope for DUEL, never allowing the audience to see more of the truck-driver menacing Dennis Weaver than a hand or a pair of feet.  The affective result is that, even though the audience knows that some mortal man is driving the truck, the driver's near-invisibility makes his mortality ambiguous. Indeed, for most of DUEL’s running-time I for one felt as if Dennis Weaver were being chased by an inhuman beast in the form of a truck; an impression Spielberg clearly plays to at the telefilm’s climax.  At this point, Weaver finally turns the tables by forcing the mammoth truck to plunge off a high cliff, during which the truck emits an animalistic “groan” as it falls to its “death.”

Thus, with these considerations in mind, I categorize DUEL’s dominant trope—that of the “perilous psycho”—as belonging to the uncanny phenomenality.  I note in passing that DUEL is among the first psychos to employ a mundane-seeming object as the means of dealing death, foreshadowing the shears of THE BURNING and the power drill of SLUMBER PARTY MASSACRE.

ROAD RAGE, however, doesn’t just eschew any uncanny tropes, as most vehicle-violence films do.  RAGE, directed by longtime mediocrity Sidney J. Furie, actually tries to trade on some of the concepts of DUEL to force some sparks into its tired battery.

Like most DUEL-imitators, RAGE isn’t satisfied to focus on one man’s existential confrontation with death, but rather employs at least two characters as the victims of vehicle-vengeance.  RAGE starts out with something close to a meet-cute moment, when Sonia (Danielle Brett) tries to give her cheating boyfriend Bo the gate.  When Bo refuses to leave her alone, a limo-driver named Jim (Casper Van Dien) tries to come to her rescue, only to get his head beat in.  Bo leaves Sonia behind with gallant wimp Jim, who offers Sonia a ride home.  However, in their progress Jim makes the mistake of cutting off a big truck, which tries to run down Jim’s car.  The meet-cuties shake it for a while, but like the Everready bunny the big truck just keeps coming and coming.  For the rest of the film, the cute couple keep running and running, arguing and falling in love in the process, until Jim finally finds a way to destroy their pursuer.

For the first thirty minutes, it looks as if Furie really intends to do a complete one-off of DUEL, right down to having Jim commit the same sin as Weaver’s character: the sin of cutting off a big-rig in traffic.  During that short period, the driver(s) of the menacing truck cannot be seen, thanks to the truck’s tinted windows.  Very briefly the truck does begin to seem like an inhuman presence a la DUEL.  This is best illustrated by a scene when the vehicle crashes through a gas-pump and continues to chase the couple, even with gas-flames dancing on the truck’s exterior-- easily the film’s only memorable scene.

However, the DUEL citations soon go out the window, as Jim and Sonia finally do get a look at the truck’s drivers: none other than Bo and a couple of friends.  It’s quickly revealed that Bo’s still pissed about being thrown over by his girl, enough to commit vehicular homicide.  This means that the cut-off in traffic was actually just a “fake-out” designed to hoax the audience, but for such a petty result that one wonders why Furie thought it worth the trouble.  The truck soon begins to show signs of wear and tear, dispelling any claim it might have had to uncanny presence.

Given that one tends to expect routine characters and action-sequences in this breed of junk-film, RAGE’s failings in these departments are not surprising.  But in this case Furie should have stuck with making a predictable vehicle-vengeance story like 1997's JOYRIDE.  The allusions to a work whose quality he can’t hope to touch are just embarrassing this time out.