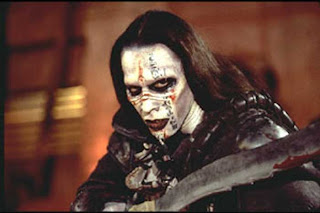 
In my earlier review of two John Carpenter films I wrote:


I do see a prevalent motif in Carpenter's work, which takes on deeper resonance according to individual treatment-- and that motif is essentially that of his first great success, HALLOWEEN: "what happens when vulnerable mortals encounter an unstoppable force?"

GHOSTS OF MARS is no exception to this characterization.  Though Carpenter's best known for the one-man killing-crew of Michael Myers in HALLOWEEN, MARS has clear antecedents in other works where a small group of protagonists are menaced by a group menace, as in 1976's ASSAULT ON PRECINCT 13 and 1980's THE FOG-- a motif which he allegedly copied from various works by Howard Hawks.

MARS offers a fresh take on this motif by placing the plot-action on a futuristic Earth-colony on the planet Mars.  A Martian police squad undertakes what should be a routine transfer of imprisoned criminal  Desolation Williams (Ice Cube) to a new location. The squad encounters not only interference from the crook's buddies, seeking to liberate Desolation, but also from the "ghosts of Mars," invisible presences which can infest human beings and turn them into savage Goth-rockers (like the one seen in the illo above).
Much carnage ensues, but although the outlook looks fairly hopeless in the end, the humans don't seem inevitably doomed, which leads me to categorize the film as a drama.

The viewpoint character within the small squad is Lt. Melanie Ballard (Natasha Henstridge), who's seen early in the film popping an illegal pill during the mission.  Her detachment is a mixed bag, with two green rookies and two more experienced officers (Pam Grier, Jason Statham), both of whom want to sleep with Melanie.  Melanie ends up needing more than a few pills to survive, for when she and her fellow officers reach the mining-town where Desolation's imprisoned, the Mars-cops discover assorted dead and mutilated bodies while most of the other miners have gone missing, though Desolation's still safe in his cell.  Desolation tries without success to break free on his own, and then later is joined by two of his crew; however, given the growing menace of the Martian Goth-rockers, cops and crooks are forced into an uneasy alliance.  A doctor who survives the chaos (Joanna Cassidy) speculates that the killers have been taken over by the "spirits" of Mars' original inhabitants, who are pissed off at the foreigners who have taken over their planet.  These discarnate presences can invade human beings and turn them into savage killing-machines, who then do the Martians' bidding and seek to kill their own kind.  Sadly, Pam Grier's lesbian character is an early casualty, scotching the desire to see her replay BLACK SISTER, WHITE SISTER in a whole new context.  Would it have killed Carpenter to kill Statham instead, and let Grier and Henstridge enjoy the desperation-shag toward the end?

The upside of MARS is that there's a lot of gun-pumping, high-kicking action as Earth colonists take on Martian zombies.  The downside is that this is another uneven Carpenter film, in which some of the more interesting story-concepts lie fallow.

The sociological conflict of Earthlings and Martians shows such neglect. The Martians apparently die out before the Earthlings reach the planet, which takes much of the bite out of the conflict between the two cultures.  Though the Martians serve the same function as the ghosts of POLTERGEIST, they act as if they are physical entities expelled from one possessee to another.  In a late scene, a possessed man held in a cell is machine-gunned by one of the rookies, and a miasma-like substance leaps from the body of the dead victim, joining not with the rookie but with Melanie.  Other "ghosts" don't seem to hop around from body to body as easily as in standard ghost-possession tales, so the script vacillates on just how the Ghosts of Mars do their possession thing.  The subplot of Melanie's possession also shows some wasted potential: though she's chided early in the film for using drugs on the job, she's saved from becoming a manic Goth-rocker because one of her allies gives her one of her pills, largely as a gesture to a doomed comrade.  The drug helps Melanie fight her possession, and she too is seen literally expelling a Martian miasma from her lungs, making her the only person to fight it off-- although even at the conclusion, when doom seems imminent, no one ever suggests using the drug to exorcise the Martian invaders.  Too much influence from the "just say no" crowd?

The strongest theme in the film is that of martial respect between allies, in this case between Melanie and Desolation, who end up being the "mismatched buddies" of the flick.  Everyone else, including a pre-TRANSPORTER Jason Statham, registers in a more minor key.  But though the script hints that Desolation may have been ill-used by Martian society, thus making him a criminal, it never offers any backstory, so that there's no real heft to the "cop vs. crook" plotline.  Melanie and Desolation end the film together, getting ready to plunge into combat with more merryMartian maniacs.

Posted by Gene Phillips at 3:35 PM
Email ThisBlogThis!Share to TwitterShare to FacebookShare to Pinterest
Labels: combative dramas, the marvelous